Pictures from the Brainbox: A Weekly Dose of Indie Animation - 'Edmond'

Every Monday or so, Chris Robinson asks an animator how they made a particular film. This week: Nina Gantz talks about the making of her pleasantly disturbing and disturbingly pleasant student film, 'Edmond' 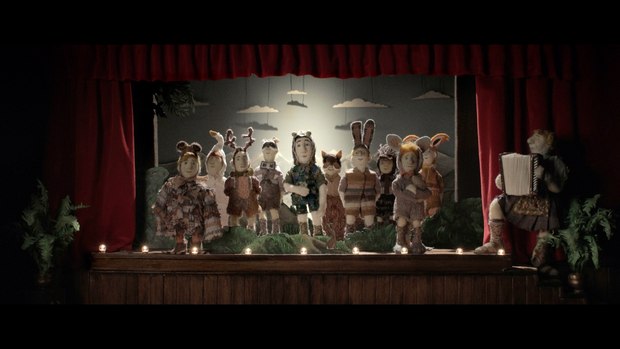 Dutch animator, Nina Gantz exploded onto the animation festival circuit with her stop motion film, Edmond (2015). Made at the legendary National Film and Television School, Gantz lovingly explores the complicated life of a good but troubled outsider (think Buster from Arrested Development) whose desire to get close to people takes him to rather disturbing lengths.

Edmond is a combination of hand drawn and stop-motion animation.

We would shoot the Stop-motion sequences on set and transfer it into the computer where the faces where drawn on frame by frame and then composited together.

Each of the techniques that I used have their own advantages, which allowed me a lot of creative control. Interesting textures and lighting ideas were possible with the stop-motion aspect of the production, however, by drawing the facial expressions I could be more subtle and bring emotion to the characters. It proved to be a perfect combination, especially if you don’t have the money to make facial armatures or replacement heads.

As the story is about a man who consumes the people he loves you can imagine it could have been quite horrifying to watch in some parts. For that reason, I decided to make the puppets from wool (raw wool felted together) so that the story literally became softer and easier to digest. This way I could tell the story that I wanted without it becoming gruesome.

It took a year to make with 9 months of filming.

I would prepare and build up the sets in the morning, make puppets and work on the set during the day and then in the evenings and through the night I would work on the drawn animation. If I hadn't made this film at a school that was open 24 hours per day I would have probably taken double that time.

At some point in spring there was a huge rain storm, my studio roof gave way and we became completely flooded. We were close to finishing a month long sequence and all the sets that were stored in the studio were totally ruined.

At that point it was extremely difficult to imagine that I was going to finish the film.

Aside from that, I found it pretty difficult to keep the whole team together and happy, as it was a painstakingly long process and we were not able to pay anyone. When you can't pay the crew it means that you constantly have people dropping out, and new faces arriving, which becomes quite difficult as eachnew person needs to be helped to understand the style and process.

There are a lot of moments that make me cringe. Every time I watch the film I look at it differently. Sometimes I’m proud but usually I see all the faults that you only notice when it is on a big screen. You have been making it on such a small scale that there’s always something that you don't spot on your computer.

As this was my first stop-motion animation I learned a lot while making it and I think you can see that.

There wasn't much time to try things out before hand and looking back I feel that the puppets could have been much better. After a few months of filming, my felting skills were much improved, however, I wasn't able to change the puppets as I had already shot too much footage. I had a similar problem with the mix of the drawn animation. I think they could have been more blended together. Also the animation is quite rough here and there because I had no time time to redraw certain parts.

I don’t think I will ever be completely content with any film I make, however, I do feel better having made it. I am very happy that it did so well in festivals and a lot of people got to see it. It’s nice to find out people understand your weird mind and it gives you courage to make new stuff. Aside from that, even if it wasn't a success I feel I learned a lot on this film, especially from the crew around me. I think I became a better film-maker. It is rewarding to try out new things that slightly freak you out.