Pictures from the Brainbox: A Weekly Dose of Indie Animation - 'Dino-Orange (How Birds Fly' 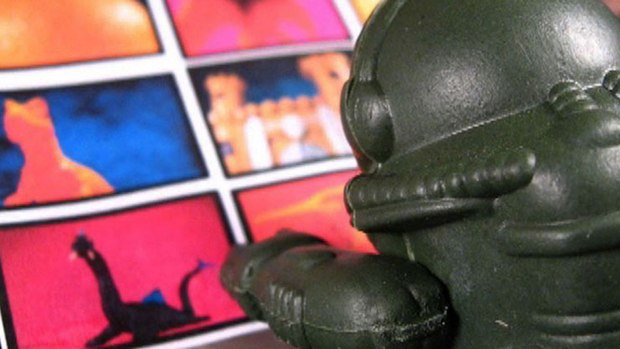 It just stuck out of the entry back one year...  this refreshing lo-fi departure (from Winnipeg based/American spawned filmmaker, Lansing Bruce Robertson) from all the polished and precise work coming in. I almost missed it, but it was a colleague who pushed for it. It’s funny, silly, awkward, but genuine and I guess that’s what struck me about it. You see so many films coming in that are quite beautiful and clearly competent, but then a bullshit detector goes off, animators so eager, so anxious maybe to say something, and say it right, that what comes out is something entirely bland as they strive to please everyone but themselves. They seem to sacrifice their own experiences to make something they’ve yet to live. So we end up with stunningly crafted phonies.

There was no pretence about Dino-Orange. Though it does touch upon the idea that dinosaurs did have the potential to fly, this is really just a somewhat playful non-linear homage to old school sci-fi films. Something about an evil monster keeping an orange hostage. This orange is believed to be preventing the dinosaurs from flying. Two soldier guys aim to rescue the orange and liberate the dinos. Doesn't quite work out that way.

Here’s someone embracing their limitations and working within them. Sure this is no eternal animation classic, but it’s rough and rough and breathes, unlike so much other ‘deeper’ animation that suffocates from an overdose of earnestness.

Dino-Orange (how birds fly) from Lansing Bruce Robertson on Vimeo.