Pictures from The Brainbox: A Weekly Dose of Indie Animation - "Christmas Day"

This week Chris Robinson looks at the bleak but honest and all too real music short,  'Christmas Day'. 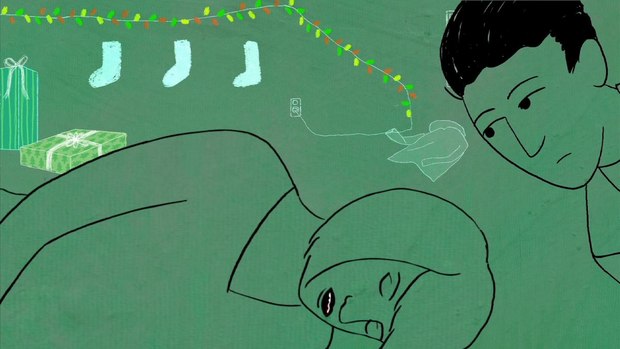 When I wrote animator/producer/pal, Richard O’Connor to get a little background information on the beautiful short film that he and his studio (Ace and Son Moving Picture Company) made for The Handsome Family’s song “So Much Wine” back in 2012, he wrote such a touching, clear and concise response that it’s best that I simply share that with you:

“I wrote Rennie and Brett Sparks [the husband and wife duo that make up The Handsome Family] a letter after my father died. I had given him their record, Last Days of Wonder (2006), as his cancer consumed him. It gave him solace, if there's one thing an artist might want to hear it's that their work gave a man comfort in his final breath. They replied with grace and a little while later I was making a short documentary on Thomas Cole (possibly the most proudly pretentious thing I've ever made, maybe that's why I like it) and I asked Brett to arrange and record a pump organ version of the spiritual "At The River". So I had some personal and professional contact with them prior to making this.

A couple years later I asked them if I could make a film with their song, “So Much Wine”. They said, ‘knock yourself out, kid’. Or something to that effect. I had been thinking about the song for a long time and had it pretty much visualized by the time we started.

Rose Stark did the design. We were looking at a few illustration styles which she synthesized into this. She's phenomenal with color. The idea was to have a monochrome green world. This would work with the red wine/red blood (and occasional lamp). The green world is hazy with melancholy. The green world is a drunken blur.

The color is obviously a play on the cliché Christmas colors. The color system is signifier that this, too, is Christmas.

My favorite part in the film is when the man returns after his drive 'and you were still passed out on the floor'. The lyric is from his perspective. She's laying eyes wide until she hears him approach and shuts them. People will hide their pain. They'll cry in the shower. They'll pretend to be asleep. Christmas, New Year's with their enforced glee can be the catalyst for eruption. Maybe I'll have another glass and another and another until nothing stops me from telling you how sad I am and there aren't enough Shelf Elves in the world to make me hide the truth any longer.

To me this is an upbeat film. These people are in a bad place with one another. Maybe their time together is coming to an end (just like the year). But there she stands in her underwear in the kitchen, palms outward asking...”

An Interview with Priit Pärn
‘Baymax!’ Provides an Rx for Humor and Compassion
How Digital Domain Brought Photoreal Characters to Life in ‘The Quarry’
SCAD GamingFest: Building Shared Story Experiences with Diverse Character Design
Mission Critical: ‘Lightyear’s Journey to Infinity and Beyond
Putting the Fun in Dysfunction: The Non-Humanistic Therapy of ‘HouseBroken’
‘The Freak Brothers’: This is Your Humor on Drugs
END_OF_DOCUMENT_TOKEN_TO_BE_REPLACED