Pictures from the Brainbox: A Weekly Dose of Indie Animation - 'Cattle Call'

Every Monday or so, Chris Robinson asks an animator how they made a particular film. This week: Matthew Rankin takes us behind the making of 'Cattle Call' (2008, co-directed by Mike Maryniuk) 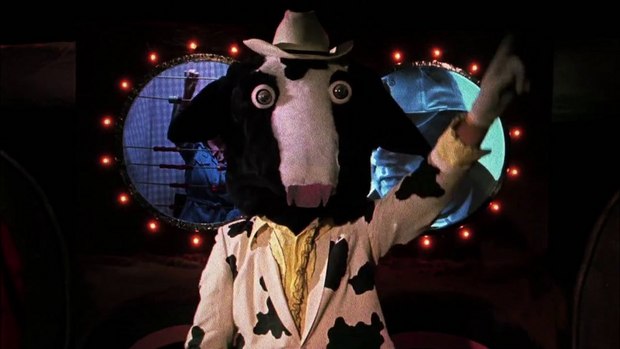 Back in ol’ 2008, a couple of Winnipeg filmmakers, Mike Maryniuk and Matthew Rankin got together to make a exhilarating experimental animated documentary of sorts about the world of livestock auctioneering. Cattle Call has since gone down as a bit of a cult favourite in the animation land for its humour, quirky subject matter and utterly original approach. I asked Matthew Rankin (the man who most recently made Tesla and Mynarski Death Plummet) to talk about how he and Maryniuk made this beauty of a film.

Mainly by hyper-caffeination. Mike Maryniuk and I would do these daily brainstorming sessions at the best Tim Horton’s in Winnipeg, right next to the Debtor’s Prison on Portage avenue. Mike and I are lifelong fans of the Double-Double, but this is the only Tim Horton’s in Canada that will serve you a Wayne Gretzky (9 creams, 9 sugars) without a prior medical exam. So Mike and I would get a couple extra-large Wayne Gretzkys, chased with shots of maximum-strength RedBull and before too long we’d be yammering at each other with almost the very same rapid-fire iambic pentameter as the fast-talking star of our film: 2007 Manitoba-Saskatchewan Auctioneer Champion, Tim Dowler. Every single image in Cattle Call was dreamed up in these furiously sugar-enflamed sessions and we have since been banned from that particular Tim’s.

Mike and I were inspired by the masters of visual music: Evelyn Lambart, Oskar Fischinger, Len Lye, Steven Woloshen, the idea of making abstract moving images that look the way music sounds. We were perhaps most directly influenced by Ed Ackerman’s early masterwork of Winnipeg Dadaism, Primiti Too Taa  (1988) which is a dazzling work of what might be termed “visual poetry,” animated entirely using a typewriter. Mike and I wanted to take this approach into the documentary form and make images that look the way auctioneering sounds. Every technique in this excessively hybrid movie – pixilation, cut-outs, light-painting, hole-punching and rubbing Letraset directly onto the celluloid – emerged from that central ambition.

It was made very quickly and spontaneously! I think between getting the money and filing for bankruptcy was about 6 months.

Mike has Winnipeg’s largest collection of trucker hats and it was a real challenge to get all of them up on screen. My favourite is the beige and brown, mesh and nylon cap advertising Vern’s Artificial Insemination Service, formerly of Lorette, Manitoba. Winnipeg’s cinematic Every-Man, Rob Vilar, appears in the film wearing this one. It was in fact a challenge to not make the film just about this hat.