Pictures from the Brainbox: A Weekly Dose of Indie Animation - 'Blotto 649'

Every Monday or so, Chris Robinson asks an animator how they made a particular film. This week: Mike Maryniuk talks Blotto 649. 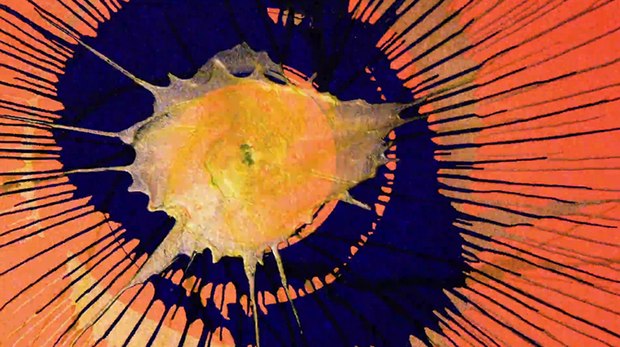 I came across this Spin Art machine at a second hand store, it’s a toy for strange kids.

Most of my film work is limited by whatever new technology has become available at the Value Village.

I recalled a very beautiful experiment by Michel Gondry and Bjork, they mounted a camera to a larger spinner.  The camera would spin in unison with the spinner while Bjork’s hands rigged to strings would cue different colours as she hit different piano keys. I always thought that there was still some room to experiment, something more psychotic and maybe a frame by frame animation.

So I made several thousand single “Spin Art” paper frames, let them dry and would put them in a logical sequence in the same way that a private investigator would tape together a shredded Giant Tiger receipt. It seemed like a really bad idea in the best way. It didn’t make any sense, it would be abrasive to watch and impossible to control the outcome. It seemed right up my alley.  I remember laughing to myself while in line at the second hand store at all wild images the machine might create.

About a week. I would work with a certain colour scheme during the day, let them dry and have the dog walk on them overnight and assemble a sequence in the morning (a pile).  I’m pretty sure there are 7 sequences. I mounted a Super 8mm camera and a DSLR to the entrance door to my work space and cycled through them. There were a few trips the dollar store and the art supply store for different paints and paper.

There also comes a point in the process where you can no longer concentrate on the paint ratios or creating a pattern that changes from one to the next. You can only stare deep into the spinning D battery powered abyss and hope that it will all turn out.

Well…It inspired me to try an even stupider technique, TYE DYE animation. I made a couple thousand custom TIE DYE’s for a 30 second sequence in my upcoming feature film THE GOOSE. It’s 2 kilometers of dyed fabric if I line them all up side by side.

The TYE DYE technique came to me after a job interview to work as a camera person for a doomed reality show called Polar Bear Town. During the interview the show runner told two really long stories of how his friend had tried to direct a film while the whole crew was on acid.

I assumed he was going to ask me questions about my camera knowledge or shooting style, but no…. He wanted to reminisce about his wilder days in Saskatchewan and had no interest in hiring me. As I walked out the door, he said “Hey man! Love that strange Blotter thing on your Vimeo page.”

I had become a full burnout unemployable cartoon of an experimental filmmaker and animator, so I defiantly chose to dive even deeper into the patchouli portal. I chose Rit Dyes over Ribeyes and started making my feature film with whatever Canadian Tire money I had in my glove box.