Pictures from the Brainbox: A Weekly Dose of Indie Animation - '8 Bullets' 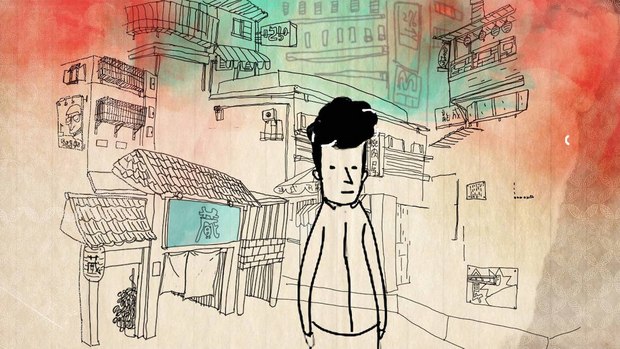 It’s rare that I regret rejecting a film for the OIAF, rarer still that it mildly pisses me off… but that’s the case with 8 Bullets, a potent, multi-layered murder mystery of sorts by Frank Ternier (who also made the recent wonder, Riot).

Maybe all the talking turned me off in the middle of that crazy selection process. Who knows… but it was a mistake because 8 Bullets is a beautiful piece of work that follows the aftermath of a violent shooting that left a daughter wounded, a mother/wife dead and a father/man with a bullet in his head.

The rapidfire multi-voiced narration captures the chaos inside the man’s head as he struggles with a wound and a deep loss while obsessively on the hunt for the ‘fish head’ man who he thinks pulled the trigger. Initially, it seems we’re watching yet another lightweight animation puzzle about the day to day activities of a simple man. Ternier lures us along before jolting us with the violent, scribbled shock of the violent event.

It’s never fully clear what happened. Was it a home invasion? I even wonder if the father is even alive or if we’re entering his post-life thoughts, as though he’s in some sort of purgatory without being aware… or it’s just a complex portrait of revenge. And man that’s one I’ve pondered… as I’m sure many have. What would you do if someone took away your spouse or child? Imagine they were still out there, walking the streets?  You’ve had your world taken from you? What would stop you from vengeance? Well…. hopefully something you and me don't have to ever consider.

Meantime…well…what can I say… we all make mistakes. I’ve made a few. Not selecting this marvel of technique and story was one of them.

8 BULLETS from L'image d'après on Vimeo.