Pictures from the Brainbox: A Weekly Dose of Indie Animation - '38-39˚c' 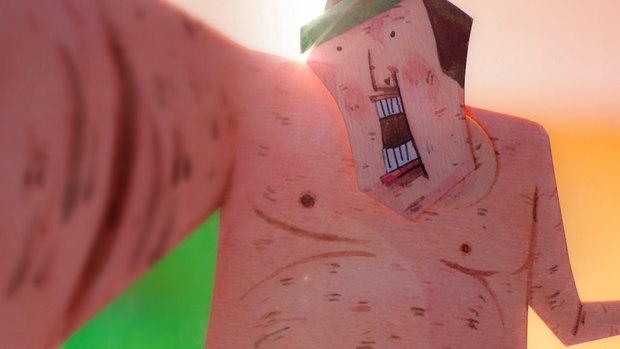 Sorry, I just like saying that word. Did Sylvester the cat ever say, “Serendipity?” I imagine that would sound splendiferous.

The word, of course, means a fortunate happenstance or a timely surprise.

You see, last week I screened a film called The Wound, which was about people who never learned to minimize the bumps and scrapes of their past. This week’s film, 38-39˚c (2012) by CalArts grad, Kangmin Kim, shows you a way of dealing with those wounds: taking a piping hot soak in a tub.

Me? I prefer to box or run and even walk it out. If that fails, there’s always a stand-up comedy special. But, a good steamy soak in water that’s just above the average body temperature is also a pretty good way to burn those bruises right off.

I love the deceptive simplicity and beauty of this film (aesthetically, it has some weird paradoxical fusion between artifice and realism. Go figure.). The story is pretty straightforward on a one level. A man swings by a bathhouse to soak in a hot tub. That’s pretty much it, on the surface. But, as he enters the tub, the heat penetrates his whole body causing his mind to drift to what appears to be a dream-like memory featuring a small man and a larger man. Although they both have identical marks on the lower right side of their backs – suggesting they are related - there is a clear disconnect between the two. Eye contact is never made.  Is the bathtub protagonist the son (is that spinning top that falls out of his pocket, a memento from childhood?  trying to bust through the hardened walls of the large father’s back (Has the father just died?) or is the guy just re-stitching two unreconciled sides of himself?

The violent rage that seems to possess the smaller man is really more a reflection of the hot temperatures boiling away a lingering emotional pain and allowing the man to rediscover that peaceful – or at least bearable - existence zone that enables him to carry on – for now.

Taking a momentary time out from life so that you can step back, take a breath and reconstitute yourself; this is how you keep wounds from turning into mind-crippling monsters.

How ‘Luck’ Applies a ‘Less is More’ Approach to Comedy
Z is for Zagreb: The Animafest Zagreb Exhbition 1972-2022
Dude! - ‘Rise of the Teenage Mutant Ninja Turtles: The Movie’ Arrives
‘Super Giant Robot Brothers’: A Milestone in Virtual Animation Production
‘Luck’ Aims to Bring Hope to Kids In and Out of Foster Care
Pre, Tech, and Post: The Many ‘Vizings’ of ‘Chip ‘n Dale: Rescue Rangers’
Hammering Out the VFX in ‘Thor: Love and Thunder’
END_OF_DOCUMENT_TOKEN_TO_BE_REPLACED