Pictures from the Brainbox: Animators on Animation - 'The Mountain of SGaana'

Haida filmmaker Christopher Auchter discusses the making of his 2017 fable. 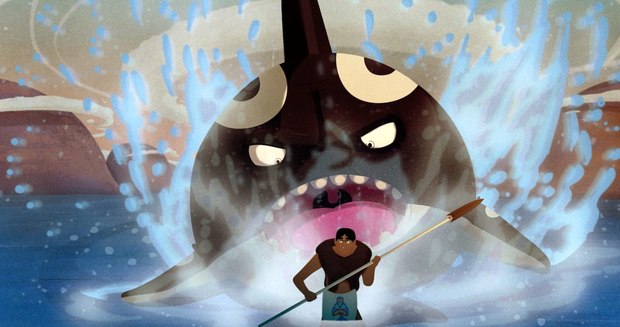 'The Mountain of SGanna' by Christopher Auchter

Haida filmmaker Christopher Auchter spins a magical tale of a young man who is stolen away to the spirit world, and the young woman who rescues him. The story is inspired by a traditional Haida fable.

We used programs like Toon Boom Harmony and Photoshop to animate. Sketchbook Pro and Photoshop for many of the backgrounds; character designs in Sketchbook and Z Brush. That was the technical aspect of making the film, but the most significant emphasis should go to the talented people who helped me, with everything from the sound and visuals to the advice given along the way. Thank you all, I appreciate it wholeheartedly.

I chose a combination of hand-drawn animation with 2D puppets made in Toon Boom. I chose this technique because I feel drawing better connects the artist with the art. A drawn technique feels more raw to me, as opposed to, say, computer-generated (CG) animated film. Don’t get me wrong, I love CG and admire it; one day I would like to explore its possibilities. To me, drawn animation techniques feel more grounded, and this lends well to the story’s message. I could have taken this instinct a step further by going entirely to hand-drawn/classical animation as opposed to incorporating puppet-style animation. Going entirely classical is something I plan to focus on in my next film; the artist is ever present with this technique.

This film took two years to make. Six months spent writing with co-writer Annie Reid and 18 months spent creating the 10-minute animated film. This film was my full-time job for 18 months -- that’s how much energy and dedication it took to create. I have my family and the NFB to thank for giving me their support.

The most challenging part was the storyboarding. I spent half my production time re-working the storyboard and animatics, trying to make the film understandable with a smooth flow. There were so many puzzles to try and solve. I fit such a big story into 10 minutes of running time. There could be no wasted shots; every shot had to add to the story and feed the audience information that advanced the story. Even with all this planning, I still had more I wanted to tell, but just could not fit it in.

How does the finished film compare to your original vision?

I would say it differs from my original vision in that I had always meant for the film to have dialogue. After seeing early animatics, it was suggested to me by my producers and advisers at the NFB to think about going without dialogue. As with all advice, I carefully considered this suggestion. In the end, I enjoyed that it would challenge me as a director and storyteller to communicate this adventure to the audience without words. It was already a complicated story and now I could take language out of the equation. Taking language out would allow this story to travel the world, with language not being a barrier.

Yes, there are a couple of sections in the film where I’ve noticed layers didn’t get placed in the proper order, or an animation element offset from where it is supposed to be, and now looks odd. I always think, How could I have missed that? Now it’s too late, and I have to live with it and hope others don’t notice it, or pay it no attention.

It started with a lot of research to learn this ancient Haida story. The more I researched the story, the more I learned about my culture, and the better connected I felt to my Haida self. That connection is reflected in The Mountain of SGaana through the character Skipper. In the film, Skipper is a drifting soul; he’s distracted, not paying attention to his environment. He’s on autopilot. On this voyage, Skipper receives an unexpected visit by a supernatural being named Mouse Woman. She tells him a Haida story, and through the sharing of the story, Skipper becomes a part of it, and this forces him to take himself off autopilot and engage. When Skipper throws the line to Kuuga Kuns and Naa-naa-simgat, it represents the connection he now has to his culture and the story.

This film is artistic by design and demanding of the audience; I feel it is a film that requires several viewings. It asks the viewer to spend some time pondering the meaning. It does not give all its secrets away at once. That was how I felt learning this story. I did not understand it in one sitting; I had to seek out different versions of the story from different Haida storytellers to understand deeper meanings or nuances within the story. Haida stories can be complicated in this way, but that’s what I like about them. They transform me into a student, an explorer, searching out new information to better understand them, and in this way provide a fresh perspective on the environment around us all. Most importantly, the more I learn about our Haida stories, the more I learn about how our culture works, and I feel all the more grounded and ready to take on the world. We all come from different cultures with unique stories. It is fulfilling to have learned one from my Haida culture and to have shared that tale with the world.

The Mountain of SGaana, Christopher Auchter, provided by the National Film Board of Canada