Pictures from the Brainbox: Animators on Animation - Deer Flower'

Kangmin Kim takes us behind the scenes of his strange and true short film, Deer Flower (2016). 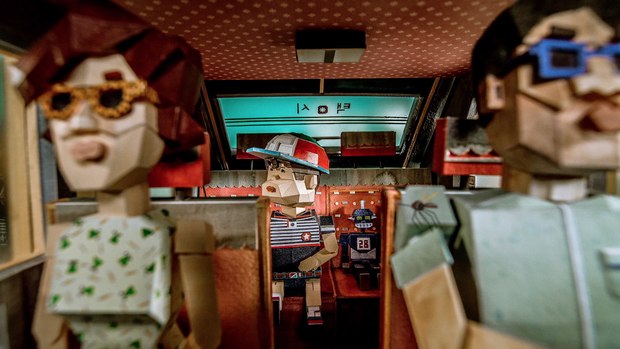 Kang Min Kim is a multiple award winning Korean filmmaker and designer based in Los Angeles. He was born and raised in Incheon, Korea. He graduated from SADI (samsung art and design institute) in Seoul, Korea, from the department of Communication design. He received BFA and MFA from CalArts experimental animation and he has been concentrating on creative visualization using handcrafted media with designed backgrounds.

His films have screened internationally at several festivals including Sundance, Annecy, Ottawa, AFI and more. His film, Deer Flower, premiered at Sundance and won the Best Animated Short award at Aspen Shortfest, Melbourne International Film Festival as well as other awards. It was also the only independent animation to compete for the best animated short subject against the works from Pixar, Google, and National Film Board of Canada at the 44th Annie Awards.

Deer Flower, mixing 3D and 2D drawn animation, is a strange, imaginative and personal story about a boy forced to consume deer blood in the hopes that it make him stronger.

For Deer Flower, I tried 3D printing in addition to the analog methods of stop motion techniques, which took many tests for the puppets and props.

I used a combination of stop motion, 3D printing and 2D animation(paper, drawing) for the film and the layering of techniques is something i likes to do a lot in my work.

All the puppets are 3d printed. Main 3 puppets and main sets are full dimension and background puppets, and some props are flat or 2.5d.

I modelled the puppets and some props using the software Maya, and then 3D printed them. Once the bodies were printed, I coated the figures with watercolours to keep the digitally-generated dimensionality without sacrificing the hand-crafted texture of the surface material.

I used a combination of stop motion, 3D printing and 2D animation for the film and the layering of techniques is something i likes to do a lot in my work.

I have always been playing with 2D and 3D spaces because I love how these different elements create unique combinations under the lights on a set. Also they make an unexpected outcome.

And actually I made this film almost by myself and i didn’t have enough space for fabrication and I thought 3D printing could save money and space. I took a few 3D classes when I was a student but I have been doing only stop motion since graduate school so I had to study and test it again and again. I learnt most of what I needed through YouTube. That is why the puppets have such a simple shape.

The film has been a labour of love for me as I spent around two years on the project in between freelance works. I spent most of the time in the pre-production stages to figure out the 3D program I wanted to use and the 3D printer. The set building and shooting only took four weeks.

It was physically and mentally challenging to wear so many hats as the director, animator, editor and compositor when I have to design and build the sets due to limited resources on a tight budget. I rent space to shoot it but i couldn’t ask AC because of my budget so I could barely breathe on the set that was built with curtains, with burning lights blasting at me in the tight studio.

Having bloody stool is the most important sequence in Deer Flower but it is still remains as an unsolved problem to me. This is the climax of film and I wanted to make dramatic effect and change. But I could not figure it out so I had to rely on sound effects to create big impact.

Even though it isn’t my best work, I am really happy with Deer Flower. I have learned so many things from the filmmaking process as an independent filmmaker. It was the first film I made after school. And I could have met so many people because of this film.

Making Deer Flower gave me artistic freedom. I could develop a unique approach and have a distinct voice with it. I tried and worked hard to make something that’s different, better and stronger with more advanced style and more mature filmmaking than my previous one.