Pictures from the Brainbox: Animators on Animation - 'Big Surf' 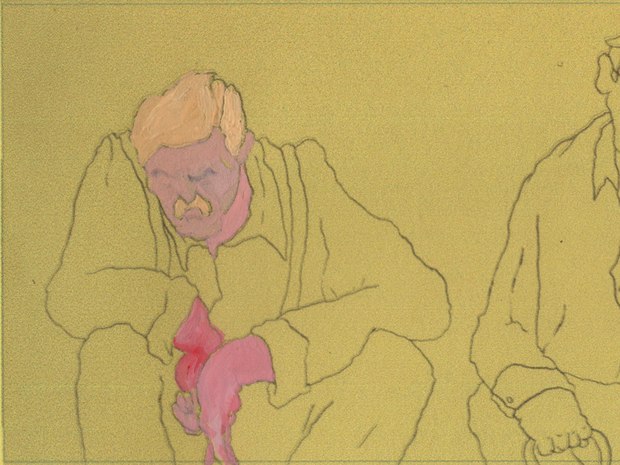 Fusing documentary, history, experimental film, Brian Smee’s Big Surf is a raw and richly re-imagined ghost story captures the blurred pains and fragments of a tragedy caused by bone-headed and greedy humans. He talks about the making of his CalArts student film.

I was taking this hand-processed film class in spring 2016. For one assignment, I filmed the landscape where the St. Francis Dam once stood and the monuments devoted to the victims of the tragedy. That footage was the first piece of the film I really had, and influenced all the work made afterward. I wrote a really bare bones script and storyboarded as I made the movie. The majority of the animation was done in Flash. The animation frames were printed out 9 or 16 to a page, roughly the size of a credit card or a postage stamp. These frames would be painted or messed with, then scanned and comp’d in After fx.

I was trying to find a method that matched the look of the 16mm film footage that opens the movie, and the small size shared a similar texture when scanned and composited. I guess the other reason why is I enjoy doing it.

A year and a half.

Putting the project on pause for four months after graduating school and moving/working, then restarting it. It was difficult because it was like carrying this half baked loaf around with you for months -- just hoping it doesn’t grow mold and become boring and gross.

When I picked it back up, I had just moved to a part of Los Angeles that held all these different layers of significance for this story. I’m in an old house next to the L.A. River, right above where the Zanja Madre (L.A.’s first water system) fed into the city’s first reservoir (where Olvera Street is now.) This new environment made restarting the project exciting. I was living in places I’d read about, but hadn’t really spent time in physically. I wanted to try to capture the feeling you get when you connect places and objects to the past. With that new energy, I rewrote a lot of the movie and cut out the moldy parts.

How does the finished film compared to your original vision?

The idea I started with was very different and more light hearted. It was about a batch of isolated incidents tied to disasters in some way. The name Big Surf is a leftover from this original idea, it’s a waterpark in Arizona I went to growing up and seemed like an ideal location for a disaster movie. The St. Francis Dam was just a small part of that iteration of the story, but as I learned more about the incident, it became the focus. The tone shifted too when the movie became about the Dam, because it was a real event. I wanted to tell the story the best I could and be respectful to the subject matter and the victims.

Nothing really makes me cringe in the movie. In a previous edit, the part where my grandmother talks about Saint Francis had more dialog from me interviewing her interspersed into it. That was super cringe. I sounded like a bumbling cliche valley girl compared to my granny’s voice.

‘Natural Habitat Shorts’: Like ‘Ranger Rick,’ But for Adults
Framestore Sets Sail on ‘1899’ with New Virtual Production Tools
Animated Characters: The Art of Babbitt – Part 1
Bruce Smith and Ralph Farquhar Talk ‘The Proud Family: Louder and Prouder’ Season 2
VFX is the ‘Thing’ for Tom Turnbull on Tim Burton’s ‘Wednesday’
We Need to Chat
Choc Chip Animation Riffs on Pop Culture in ‘The Art of Murder’
F is for Flake: The (Not So) Great Animation Robbery?
END_OF_DOCUMENT_TOKEN_TO_BE_REPLACED