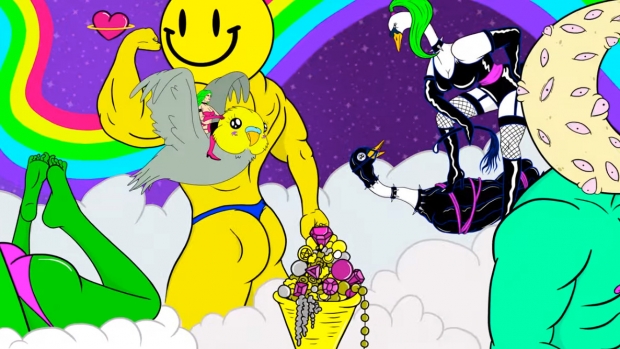 Texas-born and Jersey-raised singer-songwriter Phoebe Ryan has just shared with AWN her new single and animated music video, Reality, the third single she’s released from her upcoming debut album, How It Used To Feel, ​​​​​​​due June 26.

Inspired by the psychedelic production of The Flaming Lips' 2006 album, At War With The Mystics, a formative album in Ryan's music career, Reality weaves a wistful story through percolating synths and cascading melodies. The boldly hued technicolor video, animated by Richie Brown, steals glimpses at cartoon Phoebe's fantasies of bulging bodies, fortune tellers, and galactic journeys, all from the perspective of her pet parrot.

“Reality is about a time in my life where I was very dishonest with myself, trusting people who shouldn’t be trusted, and basically just living a lie because it was far less painful than the truth,” Ryan shares. “I love the lyrics, they’re all straight from my dumb little heart, but I think the production of the song is what really hits me. It’s so upbeat and psychedelic, anthemic, bright, yet sorrowful.” Brown’s animated projects are an often-frenetic mashup of mixed media and 2D animation; each piece seems to build upon the styles and techniques he’s used previously. “I wish I could say I knew what I was doing, but a lot of my animation process is by the seat of my pants,” he explains. “I have no formal training, so every project feels like going to school to learn how to use a new tool or technique...which ends up being the case for most of my creative endeavors.”

His production pipeline for Reality included the usual mixed-media animation Adobe toolset. “I animated most of the characters in Photoshop, rendered them out, and then composited them in Premiere Pro or After Effects,” he says. “I had a very short deadline for this project, so I had to cut a lot of corners, which resulted in some comically uncanny moments. For instance, I asked Phoebe to send me a video of her mouth singing the song so that I could trace her lips. There wasn't enough time to animate her jaw moving which somehow makes those scenes really funny to me. It's also a great example of how I make my life harder by trying to make it easier. I could have just drawn a few mouth phonemes and synced them to the lyrics but somehow the tedium of rotoscoping seemed less annoying than the syncing process. Also, I just learned the word 'phoneme' during this project after googling 'mouth word shapes for animation.' My internet search histories are comically embarrassing between things like that and all of my 'reference' images I end up gathering." Reality follows the album singles ICIMY - meaning “In Case I Miss You” - a testament to her sly wit and indelible ear for creating smashes, and Ring.  According to the singer, the lyrics in Ring were taken out of a lovelorn page of her diary, lamenting what could have been; the anthemic chorus exposes the raw emotion of the track as Ryan defiantly exclaims, “Don't you dare put a ring on her finger.”

Ryan studied at Clive Davis' Institute of Recorded Music at NYU, heading to LA after graduating in 2013. She wrote songs for a number of artists, including Man on the Moon for Britney Spears; while working on her upcoming debut album, she toured with Carly Rae Jepsen.

You can find Phoebe Ryan on social:

Find more of Richie Brown’s work on his website.