Mickey, Donald, Goofy, and a slew of their friends, and a few villains, are back in a brand-new series of animated shorts, premiering today, Mickey’s birthday, on Disney+. 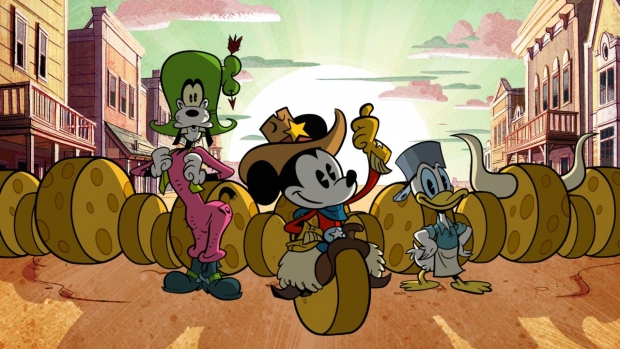 Mickey, Donald, Goofy, and an assortment of iconic friends – and a few villains - are back in an all new-animated shorts series, The Wonderful World of Mickey Mouse, which premieres today, Mickey’s birthday, on Disney+. The series hails from the creative team behind Disney Channel's Emmy and Annie Award-winning Mickey Mouse cartoon shorts that launched in 2013, entertaining fans with 96 animated comedic gems over its five-season run.

The new Disney+ original series debuts with “Cheese Wranglers” and “House of Tomorrow;” two new shorts will roll out every Friday beginning November 27. All told, 10 shorts will premiere this year, with 10 additional shorts set for Summer 2021.

The Wonderful World of Mickey Mouse is produced by Disney Television Animation; Emmy Award-winning artist and director Paul Rudish is back as executive producer and supervising director, with Emmy Award-nominated Christopher Willis providing the music.

Take a moment to giggle at a “Cheese Wranglers” clip:

Rudish, a 25-year animation veteran, was also executive producer and supervising director of the Mickey Mouse shorts series. He’s been involved in many well-known shows; he helped develop and direct the hit series Dexter's Laboratory, Samurai Jack, and The Powerpuff Girls for Cartoon Network. He also served as art director on Star Wars: Clone Wars and was co-creator of Sym-Bionic Titan. A graduate of the CalArts animation program, Rudish’s additional credits include development on My Little Pony: Friendship Is Magic and storyboarding Disney XD's Tron: Uprising.

Just like in 2015, right before the Mickey Mouse shorts Season 3 premiere, we once again speak with Ruddish about his latest take on some of Disney’s most revered and iconic characters. He shared his insights on the show’s storyboard-driven development process, and how his team of artists and writers collaborates to bring new stories, gags, and villains, to the screen.

Paul Rudish: Well, on the new Wonderful World of Mickey Mouse series, I’m the executive producer and supervising director. So, I gather up as many talented people as I can and make them do all the work, and then stamp my name on the front.

DS: Sounds like a great gig if you can get it.

PR: [Laughs] We try to create as collaborative of an environment as we can. I gather our story team, our writers, our storyboard artists, and directors, and we'll come up with ideas for stories. We'll kick them around, and we'll brainstorm a bunch until we come up with something that has traction. And we'll all kick out gags together, we'll have sessions where we doodle and work on stuff, and then pass that off to the directors and storyboard artists. And then I'll oversee the model design and work with the art directors on picking styles for our backgrounds. I have an umbrella view of the entire production, so I go around and stick my finger in everybody's pie as it were, and just get the pleasure of having lots of talented people around to collaborate with, check in with, and spit ball with. And again, like I said, try to foster as collaborative an environment as we can on a tight schedule.

For the new show, we're doing longer shorts; they’re seven minutes, where most of our previous ones were three and a half. So, with the slightly longer format, we've been able to expand our storytelling a little bit so that we can include more of the cast of characters. It gives us more opportunities to for Mickey, Donald, and Goofy, that character dynamic that's always fun… the three idiots messing things up. We've also been able to inject actual antagonists for Mickey. So, we have more stories that feature [Peg Leg] Pete or Mortimer [Mouse] as the actual villain. And we're exploring different set pieces, more genre-type stories, so that they're almost in the lens of Disneyland. So maybe there's a Tomorrowland episode, maybe there's a Fantasyland episode. A little bit more genre-based stories in this round, but still trying to maintain the same humor and style as the previous seasons. DS: Let’s separate the visual style from the storytelling and tone for a moment. As far as visuals, because these are such iconic characters that get to the heart of some of Disney's most important and valuable IP, do you need to stay within any established visual guidelines? How much leeway do you have with regards to how you design stuff?

PR: There's actually an incredible amount of leeway in designing our characters, especially Disney Canon characters. I mean, we've been able to push Mickey and the gang in crazy ways that are really out there; we get them way more squash and stretchy and rubber hosey than ever. We’re having a lot of fun with the fab five characters. And then as far as any cameo characters or characters from the features that we might use, we can stylize them a bit too. We do a little bit for simplicity of animation, but we really want them to look as much as the original characters as possible, just from our own respect for the characters. That helps the joke too. The more realistic we can portray Snow White, the funnier it is when Mickey Mouse comes jumping in a puddle and splashes her in the face.

DS: From a tone and storytelling standpoint, how much leeway do you have with the characters? Now you've got villains and antagonists; how far can you take your characters in how they react to the situations you put them in?

PR: Well, we really haven't had a lot of barriers or rules put upon us. It's been wonderful over the course of the seasons to see how much freedom the studio has given us. Our only guidelines are Standards and Practices kinds of things. Things that keep it G-rated of course, and of course, we will. But as far as what kinds of stories we want to tell, what kinds of jokes, how far we push the jokes, we really don't get any push back on that. Really, the only thing is, don't draw the Coca-Cola label in there, just legal things. DS: Walk us through some of your development process. For example, is the show scripted or storyboard driven?

PR: We are not a scripted ship. We're storyboard driven. So, we'll start with a written outline with the story structure, which we “beat” out. Then, we’ll hand it off to our directors and storyboard artists. They make sure the story tracks, but they also inject their own gags and dialogue. Then it goes back to the writers, who can help them tweak the dialogue or dial things in. There's a lot of back and forth in our process. We try to keep it collaborative as far as generating the stories at the top of the season. Again, with our story team writers and storyboard artists, we'll all just get in the room and start throwing out ideas about situations, set pieces, or locations, and we'll just bat stuff around, writing down little one sentence ideas, which we then stick on the wall.

And then you just let that ruminate. We may come back and go, "You know what, I was thinking about this idea, and I thought it might be able to work like this." Another artist will say, "Oh yeah, that's great. You know what could happen after that?" And we just brainstorm until something gels and hopefully, we'll have a good solid four or five that we can write out and have ready before we start storyboarding. And then as we get into production, we'll continue the process of trying to flesh out more stories. But we want to have a few ready to go before we launch so that we have a little bank of them. And then we will continue to revisit our brainstorming sessions until we come up with ones that are solid and appealing.

DS: You’re producing 20 shorts this season, which is quite a bit of animation. What were the biggest challenges for you?

PR: One of the biggest challenges is the schedule. Not to say that it's terribly tight… we actually have a fairly healthy schedule. But it’s important to make sure we hit those deadlines. You want to keep working on things, polishing and polishing… until you see the deadlines coming up and you say, "Okay, we're done polishing. We have to deliver." But luckily again, we've had so many talented folks on the crew, and that make things easier for the next person in line, down the chain of command and from one process to the next. If you’ve got really great storyboards, then that helps out the layout department and the model design department. We were super fortunate to work with Mercury Filmworks in Ottawa. They produced animation performances that I didn't expect we would get, and they've spoiled us.

They've really been able to add little subtle nuances and really nice little extra bits in the acting and performances. And again, the level of talent that we've had really made things a lot smoother than on a lot of productions I’ve been on. I think the challenges are just to get as much of the good stuff in there as possible in the time we have. DS: Mickey Mouse is one of the most beloved characters in entertainment history. As an artist, getting to expand the Disney world with a new series of 20 Mickey Mouse shorts is a uniquely special opportunity. When you look at the upcoming season, what do you hope audiences come away with after watching these great new shorts?

PR: I hope that people take away some laughs and some positivity. We’re not being syrupy sweet about it. Our jokes still have some tease. It's been very satisfying to see the audience reaction, and how it defies generational gaps. I hear a lot of people saying, "I love watching these with my granddaughters. My four-year-olds love it, and I'm 84 and it reminds me of the cartoons I grew up with." So, it's been great. It hasn't been too “kiddy;” there's enough bite that the adults seem to be liking them.

The ability to transcend borders as well has been really great. They seem to be well received in many countries around the world. That's partially due to our visual storytelling and physical comedy. We rely less on dialogue for the storytelling. That helps the cartoons translate easily for non-English speaking countries, because the stories tell themselves visually, as do the gags, and that was our goal. And, it's been really wonderful to see them so well received by such a broad audience.