Seattle-based director and musician takes audiences on a tour of America in his hand-made cut-paper animated feature backed by a killer soundtrack. 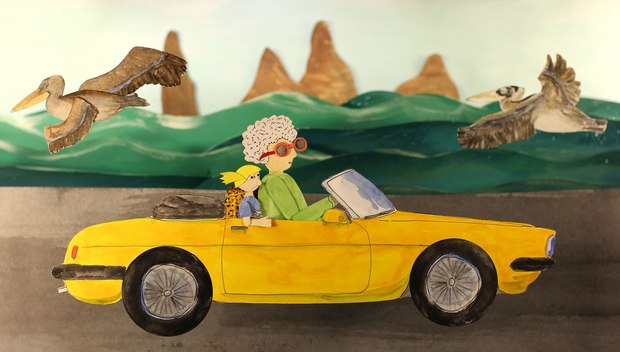 Watching director Clyde Petersen’s animated feature, Torrey Pines, is like taking a long, satisfying and meandering stroll through the outskirts of a city. You have no idea where you are or where you’re going. Instead, you’re drenched in sea and landscapes enveloping you. You are there yet not. It’s this calm, disconnected vibe that flows throughout this meditative cut-out animation film about a schizophrenic mother who kidnaps her preteen daughter (who is experiencing her own seismic shifts in emotional, mental and physical identity) and takes her across the U.S. landscape.

It’s strange to see all these beautiful landscapes in a handmade, cut-out film. Cut-out animation is generally awkward, flat and, well, unrealistic in a sense. If you want to convey the power of landscapes, most people would rely on live-action or photographic images or detailed drawings. Not here. And yet it works because the truth is that in life, the landscapes we encounter can never truly be found again. They are all subjective experiences, touched by the emotions and context of the moment. Go back and revisit some special part of nature that you love. I bet it’s not the same, ‘cause you’re the not the same.

Petersen’s beautiful hand-cut art -- along with a hypnotic soundtrack that wouldn’t be out of place in a Hal Hartley film -- manages to capture -- through the wide and innocent eyes of a child who is unaware that she’s been kidnapped. These continually shifting, drifting landscapes perfectly mirror both the mother’s erratic state of mind and the girl’s own inner transformations as she slowly starts to realize that maybe she’s not only not into men, but not even into being a woman. “I discovered animation watching MTV,” says Petersen. “It was full of weird experimental animation. Then, when Pee-Wee’s Playhouse came on, I was hooked. Those dinosaurs that live in the cave in the Playhouse are my favorite.” Petersen later studied documentary filmmaking, and, while working at post-production house in Seattle, got a chance to do some animation for commercials. “I was just helping out Britta Johnson, a fantastic Seattle animator. From there, I am self-taught.”

The inspiration to make Torrey Pines was put into motion after watching a screening of the documentary feature Persistence of Vision (2012), which follows Richard Williams’ attempts to finish his animated feature The Thief and the Cobbler. “Afterwards,” says Petersen, “we were all just hanging out talking. Someone was like, ‘Do you think you could ever make an animated feature?’ Most people were like, ‘No way!’ but I was like, ‘I don’t know. Sure. I can surely try and make a feature.’ There was like a change in my brain. Then I started thinking about what story I would want to tell. Clearly an autobiographical tale would be a good place to start.”

Though Petersen had experimented with different animation techniques, cut-out animation made the most sense “because of space, time and cost, and because cut-out films look like a kids movie and Torrey Pines is about a kid, so stylistically, it fit well.”

The film took three years to make. “I just turned my bedroom into a little production studio,” Petersen recounts. “I made a giant desk out of a door. I built a homemade multi-plane animation stand out of one of those college student-style Ikea wire frame dressers. Then I just took the wire baskets out, spray painted them black, and cut a top for it with a hole for the camera lens.”

Not surprisingly, the production team for Torrey Pines was about as minimal as you can get. “I had one employee who was also an animator,” says Petersen. “It was Chris Looney. He had just graduated from a computer animation school. He was really tired of it and ready to do some stop-motion. We worked together probably for six months and we had gotten about four minutes of it done. It was good, but it was going very, very, slow. We realized that we maybe could use a few interns.”

From there, Petersen went on social media to look for interns. “Some,” adds Petersen, “were good friends. Others we didn’t really know at all. They worked one day a week for free and we were feeding them lunch. From there, things got exponentially faster. We just started the storyboard and then we split the story board up into scenes. We just tackled a scene a week. Some interns were really good at making foliage so we were like, ‘Hey, you’re on the cactuses.’” The visual style of the film came from a love of American geography. “This will sound pretty cheesy,” admits Petersen. “But, I am totally in love with the nature of America and the vast, sprawling, empty spaces that exist in this weird, weird, country. We have all these cities that are full of people and then you just go outside of them and there’s just nothing. You could sometimes drive all day and not see anything and I felt really captivated by that.”

Water, in particular, plays a significant role in Torrey Pines, acting almost as a secondary character. “I wanted the ocean to be a third character,” Petersen notes. “It felt really important to start the film and end the film with the ocean. It would be this grounding place.”

The soundtrack, much like the ocean, also plays a pivotal supporting role in the film, subtly reflecting the power of the changing landscapes along with the complex inner states of the characters. To Petersen’s credit, the music is not used -- as it is in so many films -- to pummel us into emotional submission. “I primarily make music videos for a living,” says Petersen, “so I am often considering the balance between audio and visual impact on the viewer. How much can the music carry you? How far away will the image take you from the music?”

To help out, Petersen approached Chris Walla (formerly of indie darlings Death Cab for Cutie) to work on the soundtrack. “He’s an old friend,” adds Petersen. “And I’m very familiar with his musical productions. He had never made a soundtrack before so he was excited to learn how to. And his solo record Loops is one of my favorite albums ever, so when we started to work with him, I hoped he would be willing to make his magical tape loops for the film, which he did!” Impatient with having to wait for festivals to decide whether to show the film or not, Petersen decided to do something unique by taking Torrey Pines on the road with a live band. “It’s actually very rare for it to screen with the pre-recorded score,” he notes. “My band, Your Heart Breaks, took it on tour right after its premiere in Seattle. I don’t really believe in waiting for film festivals to give you permission to show your film, so we hit the road in a minivan for nine weeks, playing 60 shows in North America with the live score. Then we did two European tours and were headed to Japan in January to screen it with a live band there as well. I have always felt that a film with a live score is the funnest way to experience cinema. We also have a live Foley crew from time to time. When we premiered the film, it was with a 14-person band and a 10-person choir. Total chaos, but totally amazing.”

In recent years, animators have -- unfortunately - been making louder films, relying less on imagery and more on dialogue to express story and emotions. Torrey Pines, thankfully, bucks that cloying trend, instead trusting in design, music and character to convey feelings. “I wanted to make a film that could travel around the world without having that many language barrier issues,” says Petersen. “Less reading. Less subtitles and just visual storytelling. I’d been studying American Sign Language out of interest in it. That was the core of it. How can you successfully do complete visual storytelling? When I’m watching an animated film and I’m just reading or listening and listening and listening to words the whole time I’m like, ‘Where’s the animation?’”

Ultimately, Petersen sought -- and achieved -- to create a film that serves as a sort of meeting point between “a child’s imagination and adult hallucinations, to find that place where two people exist, are having dramatically different experiences but somehow co-existing.”

Seems like an experience that could benefit the world right about now.