FutureDude Entertainment’s Jeffrey Morris expands upon his comic and mobile game with a CG short that leaps from humanoid dino clans to polluted, steampunk cities in a sci-fi tale of commandos, stolen tech, and alternate Earths. 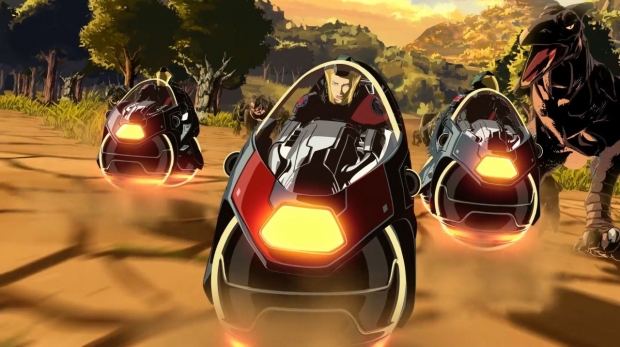 In 2014, just four years after founding his own science fiction-focused production company - FutureDude Entertainment - Jeffrey Morris took a leap into the alternate worlds of the multiverse.

“When I saw the concept featured in episodes of the original Star Trek, it made me see myself very differently when I looked in the mirror -- was it my reflection or another me staring through the window into another world?” remembers Morris. “Parallel Man allowed me to explore different versions of this reality based on a series of scientific “what ifs” -- what if the dinosaurs continued to evolve? What if our planet was covered by a polluted, futuristic megacity? What if fungi were the dominant form of life?”

Enter Parallel Man: Infinite Pursuit, Morris’ animated short film that follows the quest of Nick Morgan - a super-soldier - who, after discovering a critical piece of technology, is chased through multiple versions of Earth by commandos from a totalitarian regime. Navigating worlds of humanoid dino clans, giant mushrooms forests and polluted, steampunk cities, Morgan’s adventures in the short are a small taste from the original story, first developed by Morris as a comic and mobile game.

“I’ve seen depictions of alternate realities, but none that were visually developed based on actual scientific possibilities,” notes Morris, who has been an “avid science enthusiast” since childhood. “I think that makes [Parallel Man] a unique project.”

He adds, “I also wanted to explore current society by imagining a totalitarian regime called The Ascendancy. It's stuck in the past politically and socially with rampant sexism and racism. Yet, this empire has the amazing ability to ‘skip’ to parallel worlds and its subjugated people want to escape to better worlds. I wanted people in our world to look at things differently and question reality. The comic book series and graphic novel explore a rebellion against The Ascendancy led by scientist Carl Sagan and a group of thinkers called The Futurists. The animated film is just a slice of the first comic book issue.”

Even though Parallel Man’s animated short film has long been completed, Morris says he’s struggled to get the animation out to the public for the last eight years and is “beyond ecstatic” for the story to be releasing on DUST.

“I tried to pitch the show to various streamers and studios in 2015 and 2016 to no avail,” he says. “Everyone wanted animation that fit a pattern or cookie cutter. They said Parallel Man wasn’t violent or raunchy enough for adults and nor was it pure and fuzzy and simple enough for children. It was all terribly disappointing, especially since we'd gotten so many great reviews. To this day, I have people reach out to me monthly on social media asking why it wasn’t on TV. Maybe we finally have a shot thanks to DUST. There has to be content that the whole family can watch that also doesn’t talk down to viewers or insult their intelligence.” The landscapes of Morris’ multiverse worlds are as diverse as Parallel Man’s audience demographic, each having its own unique animated aesthetic and texture. The first Earth variant Morgan escapes to is Chinamerica, flooded with as much neon lighting as the city’s river canals are with poisonous fumes. It’s no surprise this world is inspired by the famous Blade Runner.

“Yet, I tried to design it with my own take on a futuristic dystopia,” says Morris. “I think it worked, especially with the giant traveling refinery. My team thought I was nuts when I first pitched that idea. But they came to love it.”

And the nostalgia keeps flowing, with parts of the DinoWorld in Morris’ short film inspired by Jurassic Park but, again, with some personal flair that Morris and his team brought about based on real scientific theory.

“It was fun to design our own reptiles -- especially the humanoids,” he explains. “I first saw the idea of an evolved dinosaur in Omni Magazine back in the 70s.” But out of all the pop culture throwbacks in Parallel Man, Morris says he was most excited to bring back the look of animation that he loved as a child.

“I tried to emulate the watercolor and gouache backgrounds that emotionally impacted me when I saw Charlie Brown specials on TV,” he notes. “I think we nailed that look while marrying it with futuristic technology and cool characters rendered in Toon Shader. I wanted to get a sense of ‘changing the channel’ while watching the same program. So the animation was broken up into four separate smaller films—each world with their own look while maintaining the overall art direction.”

He adds, “I didn’t want the animation to look exactly like the comic book. Yet, I did want it to look like a painting. And all these worlds share a warm rich background look while showcasing and illuminating the sleek tech elements.”

Even though the animation was made back in 2014, Morris’ team’s attention to detail puts Parallel Man’s animation on par with recently released animated series, such as Marvel’s What If…?, combining the best of 2D vibrancy with 3D/CG techniques.

“I honestly just wanted to evoke the feeling I felt when I watched the original Star Wars when I was a kid -- a sense of awe and wonder and, most of all, fun,” says Morris. “Plus, a mix of cool tech and memorable characters and an awesome backdrop of alien worlds.” In addition to working on FutureDude’s first big sci-fi feature, Persephone - featuring a journey to a planet that orbits the nearest star - Morris already has plans to expand the world of Parallel Man even more with a three-season animated TV series, each with 10 episodes.

“When I first completed the short, people had a hard time understanding the concept of parallel universes,” remembers Morris. “Now, it’s commonplace in media. I think the world is finally ready for Parallel Man. If you like what you see, please share the film and give it positive reviews wherever possible. The powers-that-be will be watching and we want them to take a chance on allowing this world to reach its full potential.”