Based on short stories from award-winning author Ken Liu, the 2D animated series explores technology, humanity, and the meaning of consciousness, including AI, while eschewing action-packed spectacle for a slow, steady, compelling dialogue-centric story. 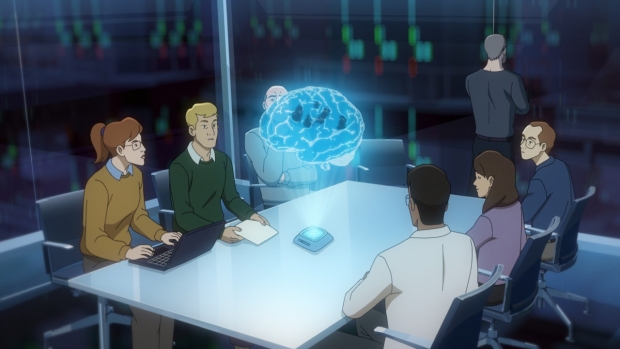 From iRobot and Bicentennial Man to Transcendence and Her, for decades, artificial intelligence has attracted film and television creators like bears to honey. But very few animations – other than perhaps Ghost in the Shell – have famously dappled in exploring AI as a main story plot. And even fewer are rooted in everyday domestic life, straying from the usual action-packed, fantastical narrative that AI lends itself to for all storytelling, let along animated.

But AMC Studios’ Pantheon, created by The Invisible Man and Turn’s Craig Silverstein, not only takes the concept of artificial intelligence to the next level by exploring “UI” or “Uploaded Intelligence,” but does so with a steady-paced, dialogue-centric story. At least, at first.

“In a very domestic, grounded emotional way, it examines this topic through the lens of family,” says Silverstein of Pantheon, “I hadn't seen that done before.”

Releasing with a two-episode debut on AMC+ this Thursday, September 1, Pantheon follows two separate-yet-connected stories of characters Maddie and Caspian. The series will also be featured on AMC’s newly acquired anime streaming service, HIDIVE, with one new episode premiering every Thursday on AMC+ and HIDIVE.

In the series, High School student and tech-extraordinaire Maddie lost her father two years ago and lives with her mother, who has only recently started to emotionally recover from her husband’s death. Maddie, on the other hand, is far from recovered; she’s also mercilessly cyberbullied at school. When offered help by a mysterious stranger who contacts her on her computer through emojis, Maddie wonders if her father is really dead, or if his former employers at microchip company Logorhythms are holding his mind hostage. Maddie goes onto a public chat forum to see if she can give any credence to her theory, which is where she meets Caspian, a hacker prodigy and social outsider who appears to be a genius trapped in an abusive, unstable household. But everything is not as it seems. As Caspian and Maddie attempt to dig into Logorhythms’ business exploits, they discover they are both at the center of a much bigger conspiracy.

“When Craig came to us in 2018, it was a surprise on all fronts,” says Juno Lee, VP and supervising director at Titmouse, the animation studio behind Pantheon. “First of all, AMC is not really known for making animation, but their content is really cool, and they're known for their great dramas. So, when I saw the pitch for this show, I was like, ‘This is never going to get picked up.’ It was too good to be true. Subject matter like this is usually reserved for live-action. No one really thinks about it for animation, at least not in the States. But we were hoping that one day we'd get to work on something like this, and it came along.”

Silverstein himself was even skeptical about whether or not the show would have the legs to stand on its own as such a different kind of animation amidst the vast, high-grossing, live-action blockbusters with which it shared similar themes.

“There was a cycle of short stories by Ken Liu, who is brilliant, and they were given to me in 2018 by AMC and I took a look at them and at first thought it seemed like a lo-fi sci-fi,” says Silverstein. “But, at the same time, I was specifically looking for something to work into adult animation and suddenly saw that this could be that bridge to something that starts like it feels as if it could have been live-action, and then grows and grows until we're way past the point where it could have been achieved in any other way other than animation.”

He adds, “But, when the script was submitted, there wasn't a lot of adult animation here in Hollywood. And so, it was a process of then going around and meeting with different animation houses and trying to educate ourselves on how that world works. I knew nothing about it. I was just a fan. And then ended up in a conference room at Titmouse. I met Juno, and we were off.” While animation is a medium many storytellers seek out to bring large, action-packed spectacles to life on a limited budget, Pantheon – though filled with plenty of its own mind-melting imagery as the series progresses – aims to prove that animation is just as strong a storytelling tool for slow-paced scenes and conversations between characters.

“We got to flex all these other muscles that we were never asked to flex; being more cinematic, taking more time to tell the story, long shots on people speaking,” says Lee of Titmouse’s animation production for Pantheon. “Pacing was much slower than what we're typically allowed to do for a 22-minute episode. Those are things you're not supposed to do in TV animation. It was exciting and scary at the same time.”

Lee says one of the biggest challenges for Pantheon was sustaining visual interest in those slow-paced moments within the series. While, in live-action, characters standing still and talking still showcase movement, either in natural facial twitches or hair whisps, in 2D animation, where still images are just that – still – the team knew it was, as Craig says, “a gamble we went into with our eyes open.” Even utilizing close-up shots, or “nowhere to run” shots as Lee puts it, that minimize background distractions, in the end, the team had to trust in the story and believe audiences would trust in the story as well.

“Because the show does get crazy,” warns Silverstein. “It gets surreal, it scales up. And when you're there, there's no way back. And so, we wanted to start with a baseline of reality, and really establish that so that when it begins to make the leap, the audience goes with it. I fully expect people to ask the question, ‘Why is it animated?’ and we were prepared for this for the first episode or two. The answer will come.”

Lee adds, “We needed contrast and to juxtapose what's going to happen later with where we started.” But more than just wanting a non-traditional base for their animated story – the visuals were inspired by the surreal-yet-grounded Japanese films of Makoto Shinkai and Satoshi Kon –Silverstein also saw the show’s potential as a metaphor for the human condition that every person faces every day.

“I think that science fiction sometimes offers a complex or heightened solution to problems that we all encounter, that we all relate to, and this story follows in that tradition,” he says. “Maddie has this problem of been bullied but she's got a much bigger problem, which is she's still dealing with the grief of her losing her father. And this science fiction solution comes along, but it’s a ‘be careful what you wish for’ brand of solution. Caspian's story's a little more complicated. And that begins to unpeel. But every teen is dealing with some form of there's something weighing down on them, and it can always feel very dramatic. And our leads are no different. It's just that the forces that are weighing down on them are 10 times bigger.”

Silverstein and Lee’s main wish for Pantheon is that it leads the charge for more creators to mix Hollywood live-action drama writing with animated visuals, rather than concluding the two need to stay separate. “The big hope is that it opens the door for more shows like it in different genres and different settings just more adult-animated 2D drama,” says Silverstein.

Lee adds, “My hope for the show is that there's a place for something like this and that it opens the floodgates to see adult animation as not just primetime comedy, gratuitous violence, or something like that. It's another medium we can use to tell all kinds of stories.”