Dice Tsutsumi, Robert Kondo, and Sara K. Sampson’s exquisite and fun 4-part series debuts today on Netflix; set in a world of Japanese mythology, it follows an oddball creature’s free-spirited daughter and her determination to carry on the legacy of the mighty heroes of lore. 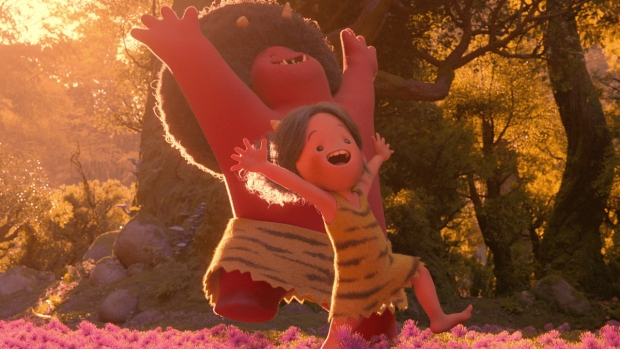 In traditional Japanese folklore, the Oni – also known as yōkai or demons – are described as orcs, ogres, or trolls most commonly known for their allegedly evil natures, ranging from murder to even cannibalism. Oni are described in terrifying detail to be red, hulking figures with one or more horns protruding from their heads, wearing loincloths of tiger skins, and carrying spiked iron clubs called kanabō.

A horrifying description to be sure. But filmmaker Daisuke ‘Dice’ Tsutsumi, who was born and raised in Japan, came across an interesting theory about Oni that inspired his latest work and Tonko House’s largest animated project to date, ONI: Thunder God’s Tale.

He continues, “That simple sort of human nature, I felt, is very current to what's happening today with the world we live in. And I felt like the story must be told.” ONI: Thunder God’s Tale, which releases on Netflix Friday, October 21, is the first animated series from Tonko House, founded by Tsutsumi and ONI’s executive producer Robert Kondo in 2014 after the release of Tsutsumi’s Oscar-nominated short The Dam Keeper. ONI’s limited series consists of four episodes, each around 45 minutes, and takes place in a world filled with Japanese mythological oddball gods and monsters.

One of the creatures’ free-spirited daughter, Onari, is determined to follow in the footsteps of the mighty heroes of lore, but her unique powers are yet to be revealed. Onari, along with the other kami characters in her neighborhood, wonders if she has what it takes to fight and protect her peaceful village from the encroaching threat of the gods' mysterious enemies, the "Oni.”

But those who have seen the trailer may also have taken notice of Onari’s father’s striking appearance to traditional descriptions of Oni.

“What struck me was how specific it was to Dice’s own journey,” notes Sara K. Sampson executive producer with Kondo and Tsutsumi on ONI. “At the same time, I saw myself in this journey. I'm from the south, but I moved to a big city. And I think we're all on this journey to figure out how we fit in the world. Exploring those feelings and themes was very powerful for me.” Tsutsumi grew up in Japan and immigrated to America close to 30 years ago. Feeling, “very Japanese in the U.S, but I'm very American when I go back to Japan,” Tsutsumi says he struggled with where he belonged, feeling like an outsider in both homes. Now, with a 10-year-old son who is American-born Japanese and facing some of the same struggles he did, Tsutsumi wanted ONI to show audiences around the world, including his son, “an authentic Japanese story that can inspire and help individuals find their own way to embrace their unique identities.”

“I hope that when you watch, you can also identify with this story, because one way or another, we all have struggled with the gap between who we want to be and who we truly are,” he shares.

Kondo, who is fourth-generation Japanese American, adds, “This is our first big project, and we could not be prouder. Just based on a little bit of reaction we've gotten from our own families, and what it means to our own families to be able to relate to them through these fictional stories, the show resonates as to why we created the [Tonko House] studio and why we think storytelling in animation is so important, not just to us, but to the world and to the future generations of filmmakers, storytellers, and kids who are going to watch it.”

Within this universally relatable story, Tsutsumi also hopes to give audiences “a window into Japan,” working with Japanese consultants and artists to create a believably authentic reflection of the culture inside of an unbelievably magical world.

“We didn't necessarily go for realism, but we wanted to go for a believability that this world could be real a world that we all wanted to spend time in,” explains Kondo. “Dice and Mari Okada, our writer, took a trip to Yakushima, which is the oldest growth forest in the southern tip of Japan. It's the same forest that inspired Hayao Miyazaki’s Princess Mononoke. Dice was there and he looked at that forest and said, ‘Oh my gosh. This is what I want to capture.’ And he would send all these photos of this really beautiful forest that's got these beautiful trees that are gigantic, covered with layers of moss and plants and vegetation.” Capturing the textures of the forest, as well as those of the characters who range from one-eyed umbrellas to carrots and daruma dolls, is what drew Tsutsumi, Kondo and Sampson to initially pursue stop-motion for the story’s animation.

“All of us have worked together at Pixar and, while CG is our bread and butter, we were always fascinated with the richness and tactile nature of stop-motion,” says Kondo. “It's just such a beautiful medium and, at the beginning of this project, we worked with partners in Japan at a stop-motion animation studio called Dwarf. What ended up happening was Dice and Sara were working on the story and it was getting bigger and more epic, and it just outgrew our own capabilities to make this film in stop-motion.”

Though the crew eventually had to move the series production to CG animation, they still aimed to capture the look and feel of stop-motion within a medium that continues to advance and gravitate toward photoreal. To get the look they wanted, the team had to turn back the clock.

“When we were working on how we capture the feeling that we loved about the stop-motion tests, we looked at Japanese anime from the 80s,” explains Tsutsumi. “And, surprisingly, a lot of people still love the limited look from the 80s. They had such a limitation back in the days when Miyazaki was making television series, but his shows looked amazing, even with very limited frames, because he was able to strike very strong poses in every frame. And that was what we would go for. It's created something that I think is really unique for CG.” The fabric feel or Claymation look for the diverse characters, along with their limited frame movements and puffy, mossy world, weren’t the only ways the ONI team created a hand-crafted look within their series. They also included Easter eggs of traditional Japanese craftsmanship from the way the school desks, doors and windows are designed, to the Raijin god symbol painted on drums.

“One other detail that I really do love is inside the beautiful cave house where Naridon and Onari live,” says Sampson. “Inside you'll see these Japanese graphics plastered all over the wood. It's just such a charming level of detail.”

The craftsmanship in the show, which pays homage to Tonko House’s studio branch in Japan’s “Craftsman City” of Kanazawa, also extends to the cuisine.

“One thing that I care so much about are these fermented beans called ‘natto,’” says Tsutsumi. “I confidently can say this is the best natto ever created in CG animation, mainly because I don't think anyone has ever made natto in CG. They are these kinds of gooey beans that show up in the first episode, which are not cheap to make in CG. But I cared so much to capture it in an authentic way because I grew up with it, and I wanted to make sure people understand what that is.”

He adds, “I felt so responsible because I'm Japanese and I should be able to make sure these things don’t feel Americanized, but it’s thanks to everybody's passion and diligence with the research and our Japanese creative collaborators that I feel so confident and proud that we were able to capture, very authentically, little crafted artifacts that show up in the background.” Sampson, who lived in Japan for a time during college, also believes their team was able to capture the unique, inexplicable magic that can only be found in a Japanese forest.

“I just think everything is so perfectly captured on screen,” says Sampson. “With all the emphasis on seasons and environments, it just feels like I'm back in Japan. There's a spirit that you feel when you’re in a forest in Japan. It's hard to describe, but I feel it was truly captured in ONI.”

Tsutsumi hopes that these cultural specificities, which the team was very careful not to Westernize in any way, are further appreciated within this story to which anyone and everyone can relate. But, he says, there’s a bit of vulnerability that comes with the release of ONI.

“For me, it’s an exciting but also super nervous moment,” he reveals. “The theme of this story, being an outsider and trying to find your way, trying to find out who you are, can this film even find who it belongs to? It’s the biggest production we have ever handled, but it’s still an independent film. It’s the biggest platform that we’ve ever had but there’s still so much content out there and ONI’s still a culturally specific story. Will it even be seen? How will the world respond to this? I'm not sure.”

He continues, “This is not the most typical of animated shows in terms of look and in terms of story. But we really believe that, if people watch it, people will respond. I really hope people find a way to give it a chance and watch it.” In the spirit of bringing less obvious and hidden things into the spotlight, Kondo also encourages viewers who watch ONI to look out for a very small but very sweet Easter egg that captures the essence of Japan.

“If you really take a minute to look at the classroom, the number of chairs that you see versus the number of characters that you see, at first blush, looks off,” says Kondo. “It looks like there's one character missing. But, in Japanese folklore and mythology, everyday objects become characters. And so, there's this one little rock that you will see show up in different scenes. And he's actually a character. A lot of people, I don't think, will notice, but that's a special Easter egg that's in there.”