One Giant Leap for Sheepkind: ‘A Shaun the Sheep Movie: Farmageddon’ 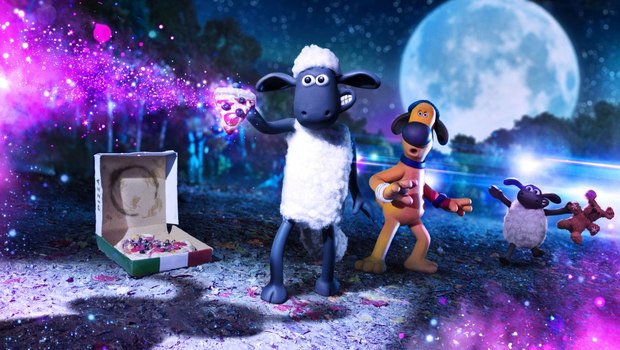 Those irascible woolly mischief-makers are back; A Shaun the Sheep Movie: Farmageddon, the sequel to Aardman’s 2015 hit stop-motion comedy adventure, Shaun the Sheep Movie, debuts today on Netflix. Boldly going where no sheep have gone before, first-time directors Richard Phelan and Will Becher go interstellar as Shaun and friends attempt to help a cute and powerful purple extra-terrestrial, Lu-La, track down her missing spaceship so she can safely return to her home planet. A sci-fi romp complete with plenty of gags, chases and a dastardly villain, Agent Red, and her hazmat-suited henchmen, the warmly received film was originally released last October in the U.K. and a smattering of other countries; a planned North American theatrical release soon migrated to the interwebs once Netflix bought the distribution rights.

Based on the hugely popular Shaun the Sheep TV series, which in turn is based on a character created by Nick Park for his 1995 Oscar and BAFTA-winning short film, A Close Shave, the film is more elaborate, sophisticated, and bigger scale than anything previously produced within the Shaun the Sheep franchise. “From the very beginning, when we decided to do a sci-fi film, we knew it would be expansive,” Phelan states. “We’re going into outer space and visiting other planets. We had big ambitions. It was our first film as directors, and though we know the world of Shaun the Sheep very well, we definitely wanted this one to feel different, and to build on what the first film had done.”

From the first scribbled Post-it notes on their office wall to the busiest times when peak production boasted 35 shooting units on 70 custom-built sets, the directors knew the pressure was on. “As Rich says, we set some massive goals both in design and complexity,” Becher adds, “But everyone in the crew just completely rose to the challenge, which was great. Early on, we just told everyone, ‘Don't let anything inhibit you. Just keep pushing it, and we'll try to problem solve our way out of it afterwards.’ The story crew and screenwriters just went for it; our producer, Paul Kewley, would say, ‘Okay, this is too big. What is this scene really about? How can we sort of bring it down a little bit, but keep that ambition throughout?’ Somehow, we always figured it out.”

The exacting and methodical nature of stop-motion animation makes planning shot planning extremely difficult. Frame by frame animation shot using hand-manipulated puppets requires meticulous focus and effort. There are no take-back or do-overs per se. You mess something up, you must start all over again. Consequently, Phelan and Becher took great effort to visualize the action, producing concept drawings, miniature models, storyboards and a detailed animatic. “We did a small number of previs paintings of each location,” Becher explains. “The farm in harvest time, corn fields, the underground base, all of them. Those were used to inspire the story team and the art crews. Using storyboards, the animatic was put together so we could get a sense of how big the film was.  Then we had PPMs – our pre-production meetings -- where we literally went board by board to determine what was going to be a physical set, what extensions were needed, what had to be done with a matte painting, and what would be on each unit when we would start filming a year later.”

“It all boiled down to those early PPMs, where we figured out and assigned crew tasks,” Phelan continued. “’Okay, if this is all going to be matte paintings, we need matte painters early on.’ Or, ‘this can’t be built… how are we going to get this done?’ There was no formal previs, just artwork, site mockups and CG mockups. We didn't do any CG previs until quite near the end, when we started to shoot complicated scenes with the spaceship. Anything where the spaceship's flying around, we had a CG animator block out the most extreme movement. Everyone in the art department was so giddy because all their influences could come to life. Everyone was geared up. It’s Spielberg, it’s Kubrick. Sci-fi is like a giant toybox.”

Since the studio doesn’t really do formal layout on a film like this, Phelan’s extensive story experience greatly helped the directing pair visualize scenes early on. “Richard is really good at layout because of his years in story,” Becher notes. “He would often draw how a scene would look, and then the art department would build a foam core mock-up of the set so we could put a camera on it and get a sense of how it's going to slot together.” “They would also build some of the sets in CG to figure out physically how much would be seen off-camera, and how much they'd need to build,” Phelan remarks. “They’d show us CG models of the sets before building the full-scale versions. Like a real film shoot, you can't just build for the sake of building. We would rigorously go through the story process to determine what we're going to shoot so that the art department could build just what was necessary. We needed to make sure that everything built, and everything shot, ended up on screen.”

According to production designer Matt Perry, the sets were so big they had to be built outside the studio, brought in in pieces and assembled on their side, with the cameras shooting it sideways. “It’s a bit like they used to shoot Batman and Robin climbing up the buildings in the old TV series, but hopefully a bit more convincingly,” he states. “We had to build Mossingham village! That was a very big build. One of our biggest sets ever. A lot of time went into that. I would say that set is at least a man-year’s worth of work. Maybe a bit more.”

Another big set piece was the international space station. According to Phelan, it was enormous. “The international space station was a huge set piece. And when the spaceship scratches along the side, we enlarged that one section so we could destroy just that one part. It sounds weird because we're working with miniatures of miniatures, and we're working with large scale, because some things were so complex. Shaun is only about five inches tall. We would build oversized versions of his hands, or oversized versions of a character's feet, just so we could get a nuanced look by playing with the scale of things.” Managing 35 shooting units meant the directors had to put a huge amount of faith in the sensibility and talent of their animators. “We spend a lot of time prepping before the animator starts; Rich and I will often act out the scenes with the animators, so we use live-action videos to really get a discussion going, rather than to use it as something to trace,” Becher shares. “We use video to nail the timing and minute expression changes. So, in a way, that's our team rehearsal. We do that video. There's a huge amount of trust involved; we trust our team completely.”

“Yeah, we trust them to get on with it,” Phelan affirmed. “And if they have a question, or if they have an idea, they'll call us in. So sometimes, midway through a shot, if an animator wasn’t sure it was working, or they had a different idea, they'd call us in, and we'd have a look. Nearly always the shots came back better than we imagined. Sometimes they had an idea on set, and they would call us back in and go, ‘I'm going to do this.’ We’d say, ‘That sounds fantastic. Go for it.’ And it always came back better than expected.”

While the production employed some 3D printing, it was primarily used for set pieces and some internal puppet mechanisms, rather than for facial replacement facial parts like LAIKA uses on their stop-motion films. “We've used 3D printing on each project, and we've used it more and more for some of the internal mechanisms and things like making molds for parts of puppets,” Phelan reveals. “We also use 3D printing for props and vehicles. So, if there are multiples of a prop, they’re 3D-printed, otherwise they might not look right. But the puppet heads and mouths are all clay. They're sculpted by the animators themselves. Which makes every scene unique. We can never have the same shot twice. If an animator does a shot and it's not right, they'll do it again, but everything will be different because they're physically moving the clay around in front of the camera.” Becher discloses there’s also a small amount of CG in the film in addition to obvious area such as wire rig removals. “Because it's a sci-fi film, we knew there were certain things that we really couldn't do in stop-motion, like those dark nighttime scenes with volumetric headlights and torch lights,” he acknowledges. “We used CG to enhance the atmosphere; quite often, we used it for glowing objects, or for smoke and dust and particles.” “There’s also a CG version of the spaceship,” Phelan chimes in. “We built a physical spaceship, but the moment it lifts off, we have a few shot frames and then it goes into a CG version. It gets so far away from camera we just don't have the set space to do it with stop-motion. So, we’d use CGI. There’s also a part where it whips past the church. The church is a physical set, and the bell tower inside is an animated element, but the spaceship itself is CGI. That's the only real CG piece. Even the mothership, when it comes in to land, is a giant set. But the moment it lifts off the ground, it turns back into CGI again. There are crossover frames, where we cut away and we cut back into the CG one. But the illusion is hopefully maintained throughout.”

Helming a feature film for the first time, the Aardman veterans established a successful co-directing dynamic early in the production. It helped Phelan had a story background and Becher had an animation background, because between them, when they had a good story idea, they could easily work through the realities of character development, design and how things could physically be produced.

“We were together for almost all of pre-production,” Phelan describes. “At every art department meeting, model-making review, or story editing session, Will and I would be together so we could understand what was important to both of us. That meant that any decisions we made on the floor with the crew, the animators, the set dressers and DPs, we had already lived and breathed for a good year-and-a-half.” “Once the shoot began, we split things almost in the middle,” Becher states. “We’d each work on different sequences. Before we’d shoot, we would meet in the morning to discuss our plans. If we had any ideas for jokes, or determined we’d be shooting a similar scene in a different part of the story, we could talk about performances. And then we’d watch rushes together before heading out to brief all the animators. We wouldn’t see each other for the better part of the day.”

“We would come together again in the evening to sit for a couple of hours with our editor, Sim Evan-Jones, to cut in new footage and tighten up the animatic,” Phelan added. “Keep discussing the story and how we were going to change the pacing or tone. Just keep working at it. We lived together in the mornings and evenings and would disappear during the day to shoot our respective scenes.”

“And we literally shared a tiny office, which helped us bond,” he concludes. “We were there literally every day from sunrise until late at night, when the security guards kicked us out. We spent all that time working together to ensure we could make the best film possible.”