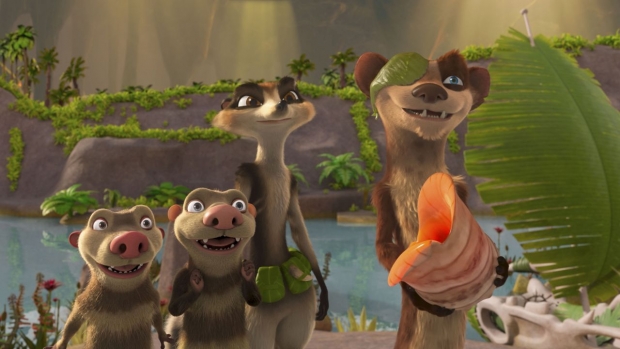 For anyone who feared that the demise of Blue Sky Studios might mean the end of The Ice Age – one of the world’s most popular (and lucrative) franchises – it’s time to pop the champagne cork and break out your mukluks. The Ice Age Adventures of Buck Wild, the sixth film in the (literally) mammoth series, premieres on Disney+ today, January 28.

Directed by John C. Donkin and executive produced by Lori Forte – both of whom have been with the franchise from the very beginning – The Ice Age Adventures of Buck Wild follows the zany travails of possum brothers Crash (Vincent Tong) and Eddie (Aaron Harris), desperate for some distance from their older sister Ellie (Dominique Jennings), as they set out to find a place of their own. Unfortunately, they quickly find themselves trapped in the Lost World, a massive underground cave (don’t you hate when that happens?). They’re rescued by their one-eyed pal, the adventure-loving weasel Buck Wild (Simon Pegg), and together, with the help of some new friends (like Justina Machado as Zee), they embark on a mission to save the Lost World from dinosaur domination.

We spoke with Donkin and Forte about the development and production of The Ice Age Adventures of Buck Wild, as well as the future of the franchise.

First, take a moment to enjoy the trailer:

AWN: Initially The Ice Age Adventures of Buck Wild was supposed to be a series. What made you decide to develop it as a feature instead?

Lori Forte: We had the basic idea a long time ago, and it was always going to be about Buck Wild and the lost world of dinosaurs, and Crash and Eddie coming there. And at some point we realized the story we wanted to tell would be better told in a movie, because we wanted to get into the characters. Buck and Crash and Eddie were great characters, but they hadn’t really been developed, because in a movie with 18 other main characters, you really don't have the time to do that. So in this case, we wanted to really focus in on them.

We loved Buck and we loved the lost world with the dinosaurs and carnivorous plants and other perils. And Crash and Eddie, all these years later, have grown and changed and are trying to be independent. So we wanted to get to know them. And, hooking them up with Buck, the isolated character living a solitary existence, provided an opportunity for him to change and for us to see what he’s all about. So it was really about getting to know these beloved characters better, in a way that we haven't before. AWN: In the past, you always worked within a single studio. More and more now, as more animated features are being produced, many studios are outsourcing the animation. What was it like for you directing and producing with an outside studio?

John C. Donkin: We've been working with Bardel Entertainment in Vancouver, and Kelowna up in British Columbia. And, as one of the architects of the original pipeline at Blue Sky, it was interesting for me to adjust to a different workflow. But the industry is evolving, as we all know, and we're seeing different kinds of animation, and different innovative techniques and technologies. But compared to traditional filmmaking, the CG industry is still in its infancy. So it was a bit of an adjustment, but there are some things that are really super-efficient and awesome about the way that different studios do things.

AWN: John, this was also your directorial debut, after years and years of being a producer. What was it like putting on the director's hat?

JCD: I’ve worked with a lot of directors over the years, including a number of first-time directors. And I had helped guide them through some of the processes, in terms of what directors need to do and when they need to do it. So I had a certain expertise, and it was awesome to be able to step into the directing role, already knowing about the production limitations and guidelines that I needed to work with.

And so I was able to really try and make sure that my creative decisions and directorial decisions were propelling the production forward, and not going sideways or drifting backwards. It was always really important to me that every decision we were making was driven by character, story, pace, all those things, rather than just being different versions of everything. And Lori was a great partner in that respect. Whenever we needed to solve a problem, whether story mechanics or character things, we would just get on the phone and we would chat about it with the story people and the director that I was working with at Bardel. We would just brainstorm these things and we'd come up with solutions.

LF: Given the fact that John knew the Ice Age canon backwards and forwards, and knew all the characters, it made all the sense in the world for him to direct and for us to work with another studio. AWN: John, now that you've had this experience, are you going to try to direct more, rather than producing?

JCD: I had so much fun on this project that I definitely want to do it a bit more. It was very stressless. Because I had all that production knowledge as a director, I got tons of support from the production crew. They knew that I knew what I was talking about. It wasn't like, hey, I want to invent a whole new planet and we're going to build it in a week, and we're going to see it tomorrow. I understand what the limitations are, and I know what we can accomplish if we just all paddle in the same direction.

AWN: What were the biggest challenges for you on this production?

LF: As John said, we had a very smooth production. It’s true that we didn't have the amount of time that we usually had for the other Ice Age films. The time was very, very truncated. So we just kept everything moving forward quickly. We had to solve problems quickly and we had to come up with new ideas quickly, if something wasn't working. So, if anything, that was probably the most difficult part. But again, it went so smoothly, I can't really say that it was difficult.

JCD: It's the same challenge that every production faces. There's always a desire to have more time, as schedule is always the determining factor. But we had great support from the executives at Disney and, when we needed more time, we were able to get it. I pushed to have great post-production because I really wanted to have a wonderful score. And we got a beautiful score from Batu Sener, which really makes it feels like an Ice Age movie. And we got great sound design work from the folks up at Skywalker. So I was just pushing to make sure that we were keeping the production value as high as we possibly could against the schedule. You just do what you can do. AWN: Are we going to be seeing more Ice Age films?

LF: We hope so. I think it'll be dependent on the audience. We have lots of thoughts and ideas. There are plenty of places to go and stories to tell, and characters to create and go back to. So there's no dearth of material. If audiences respond well, I think it's very possible.