A tour of more than a dozen standout narrative, abstract and student short films from the 41st edition of the Ottawa International Animation Festival. 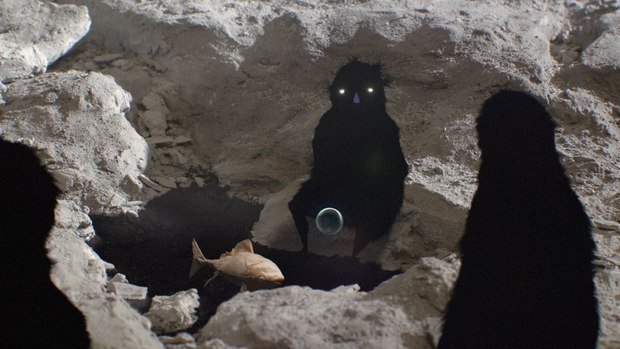 AWN was in Ottawa for the entire run of the fest, taking in as many screenings and talks as we could cram into our schedules. While overall this year’s programming was incredibly strong, sometimes making it difficult to choose our favourites, there were nonetheless several standout projects that especially captured our attention.

Over the coming weeks, AWN will be publishing nearly a dozen interviews with directors whose films screened at OIAF 2017 in a series of articles featuring some of the most intriguing projects to come out of this year’s line-up. In the meantime, here’s a quick look at some of the Narrative, Non-Narrative and Student films that delighted and moved us the most. Winner of the Award for Best Sound at OIAF 2017, Michaela Müller‘s non-narrative short employs paint on glass to conjure the modern-day airport, with all its rhythms and tensions as hundreds of thousands of people are funneled through each day.

In a modern day airport, the flow of passengers is broken by sudden irregularities. Security forces try to get to the cause of the disruption, the atmosphere turns menacing at the slightest irregularity. Tragedy and panic are always just one step away. Scratch animation master Steven Woloshen returns with a colorful new film, a non-narrative ode to his father and his love of gambling. Using paint on film, Woloshen has been passionately creating handmade abstract films and time-based installations for more than 30 years. Lecturer, Juror, technician, animator, craftsman and recently, author of Recipes for Reconstruction, the filmmaker’s manual for decay, renewal and other handmade, analogue film techniques. Casino is a delightful romp, “A film for my Father, who gambled with love.” Winner of the Public Prize at OIAF 2017, this 3D computer animated narrative short from the director of Unicorn Blood (2013), Birdboy (2011) and 2015’s Psychonauts, the Forgotten Children captures the desperate horror of human existence with humor and wit. In Decorado, the world is a wonderful stage, but its characters are disgraceful. The winner of the Award for Best Student Animation at OIAF 2017, this non-narrative short created by a Montreal-based trio studying at the Mel Hoppenheim School of Cinema at Concordia University uses Rotoscope animation to completely blow minds. The film is a quick, disturbing look at the culture surrounding the use of hallucinogenic drugs such as LSD in American military operations. “I’m not gonna lie to you. I’m going to tell you the facts as we know them...”

Four Faces of the Moon by Amanda Strong (Canada) Winner of the Canadian Film Institute Award for Best Canadian Animation at OIAF 2017, Four Faces of the Moon is a stop-motion animated short narrative told in four chapters, exploring the reclamation of language and Nationhood and peeling back the layers of Canada’s colonial history.

This is a personal story told through the eyes of Toronto, Montreal and Vancouver-based director and writer Amanda Strong as she connects the oral and written history of her family as well as the history of the Metis, Cree and Anishinaabe People and their cultural link to the buffalo.

Canada’s extermination agenda on the buffalo isn’t recorded as fervently as it was in the United States, yet the same tactics were used north of the border to control the original inhabitants of the land. This story seeks to uncover some of that history and establish the importance of cultural practice, resistance and language revival from a personal perspective. A co-production between Croatia’s Bonobostudio and the National Film Board of Canada, this charming needle-felted stop-motion fable created especially for children received an Honorable Mention for the Canadian Film Institute Award for Best Canadian Animation. The film is the follow-up to Cvijanovic’s 2013 2D animated short, Seasick, a dreamlike pen-and-ink maritime escapade that also screened at TIFF.

Based on the classic story by Branko Ćopić, Hedgehog’s Home is a timeless and delicately choreographed tale that revives the notion of cultivating our own place of safety, dignity and comfort, no matter how big or small.

In a lush and lively forest lives a hedgehog. He is at once admired, respected and envied by the other animals. However, Hedgehog’s unwavering devotion to his home annoys and mystifies a quartet of insatiable beasts: a cunning fox, an angry wolf, a gluttonous bear and a muddy boar. Together, the haughty brutes march off towards Hedgehog’s home to see just what is so precious about this “castle, shiny and huge.” What they find amazes them and sparks a tense and prickly standoff. This weird and wacky short from the animator behind the iconic stop-motion episode of Adventure Time, “Bad Jubies,” has had plenty of traction online following its release as part of this year’s Late Night Work Club “Strangers” compilation, but we were delighted to see it again in a theatrical setting. Winner of the Award for Best Script at OIAF 2017, this charming hand-drawn 2D narrative short from Estonian animation director Chintis Lundgren was produced by the National Film Board of Canada, Adriatic Animation in Croatia, and Estonia’s Animatsioonistuudio.

In the film, Manivald is still living at home with his retired mother. The day before his 33th birthday a hot young wolf called Toomas comes to fix their washing machine. A love triangle develops, which leaves Manivald more and more frustrated. This unsettling and disturbing student animation by Jonatan Schwenk from the Offenbach Academy of Arts and Design, Kunsthochschule Kassel, employs 2D and 3D computer animation and puppets to arresting effect in a narrative that appears to take place toward the very end of creation.

After a flood, some fishes got stuck in old trees. In danger of drying-out they scream sharply. Awakened by the noise, the inhabitants of a nearby cave don’t feel happy about the unintended gathering.

The Battle of San Romano by Georges Schwizgebel (Switzerland) Using painterly strokes to capture movement within the famous 15th Century painting by Paolo Uccello, Schwizgebel’s film begins with the savagery of a battle and comes to a halt in a rendition of a masterpiece. A musical with apocalyptic undertones, The Burden is an existentialist romp. The stop-motion animated short, which took home the top prize at this year’s Fantoche Festival, is divided into four episodes, which take place in a supermarket, an extended-stay hotel, a call center and a hamburger restaurant. The follow-up to the BAFTA-winning, Academy Award-nominated The Bigger Picture (2014), The Full Story mixes puppetry with paintings and live-action footage to bring a new family brilliantly to life.

When the dad next-door walks out in this narrative short, five-year-old Toby discovers that parents leave. As the shock hits, the entire room catapults skywards, morphs in mid-air and lands as a different space. The rooms keep pace with Toby’s volatile emotions as home life spirals out of control in the divorce boom of the 1970s and 80s. Forty years on, kaleidoscopic scraps of memory still cling to the walls; and Toby clings to these fragments, trying to piece together the full story. Winner of the Nelvana Grand Prize for Independent Short Animation at OIAF 2917, this narrative short about a Native American chief and an ugly cat trying to find peace in an evil neighborhood combines 3D computer animation with puppets, simulated marionettes, motors & dynamics to breathtaking effect. Diakur, a Russian-born filmmaker based in Mainz, Germany, calls Ugly “a broken simulated short film” inspired by the Internet story “Ugly the Cat.” Winner of the Cartoon Network Award for Best Narrative Short Animation at OIAF 2017, Wicked Girl is the story of S., an eight-year-old little girl with an overflowing imagination. She is keen on nature and animals. While she is looking back on the good old days in her grandparent’s village from her hospital room, dark and terrifying memories emerge and, little by little, begin to make sense.

Hand-drawn using 2D computer and cel animation, as well as ink on paper, Wicked Girl is a visual delight that tackles a heartbreaking subject with empathy and sensitivity.