In a freewheeling group confab, the creators and stars of the two-time Emmy Award-winning animated sitcom herald the arrival of a new season, debuting September 4 on Adult Swim. 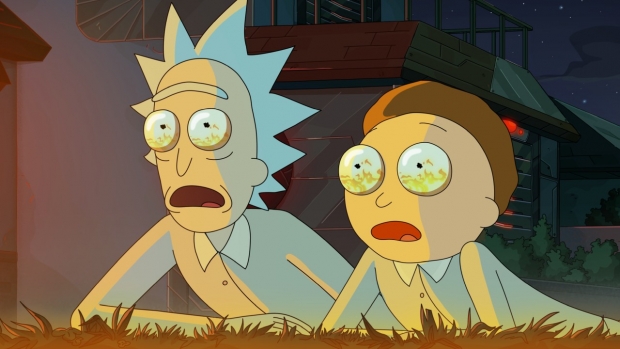 On the cusp of its sixth season, debuting September 4 on Adult Swim, Rick and Morty – which has been variously described as "a never-ending fart joke wrapped around a studied look into nihilism" (Decider) and “a decadent regurgitation of all [of postmodernism’s] tropes, all at once, leavened by some humanistic wistfulness" (The New Yorker) – remains the mostly unchallenged champion of wacky humor deployment in the service of existential dread.

The series, as we all know, follows Rick Sanchez (co-creator and executive producer Justin Roiland), a sociopathic genius scientist, who drags his inherently timid grandson Morty (also Roiland) on insanely dangerous adventures across the universe. Sharing in the intergalactic fun – and not voiced by Roiland – are Rick’s daughter Beth (Sarah Chalke), son-in-law Jerry (Chris Parnell), and granddaughter Summer (Spencer Grammer). Season 6 picks up where the previous season ended, with Rick and Morty somewhat the worse for wear and down on their luck. Will they manage to bounce back for more adventures or will they get swept up in an ocean of piss? (Spoiler alert: It’s both.) And, as always, the show’s signature multiverse setting remains a key determinant of its storylines and character development.

“Playing with the multiverse as a huge component of the show has been really fun and fresh,” says Roiland. “And as sci-fi fans, and fans of that concept in particular, it’s really fascinating to lean into that as our safety net for balancing the crazy, heavy canonical stuff with changes in the characters. I feel like we’re at a point in the show where we can kind of do whatever we want, but we can still tell an episodic story. We have deep lore that we want to go back and explore – I’m a fan, I love that stuff – but we are also making fun of that for the people that are really into the show.” Expanding on the benefits and challenges the multiverse provides as a storytelling device, co-creator and executive producer Dan Harmon says it’s important to establish boundaries, so that characters can’t just reset or “find a different universe to hang out in.”

“Marvel maintains that by making it come at a heavy price, in that the specifics are very  uncontrollable, and it’s driven by an almost spiritual kind of destiny,” he says. “In Rick and Morty, we decided to confront it more directly. ‘If this dude can just do that,  why doesn’t he just leave right now? Let’s see what would happen if he did leave. He doesn’t want to be here – let’s just have him go home, or to a different timeline, and reset.’ We had that conversation as early as Season 1. That was a big Rick and Morty birth moment for us, when we decided not to be afraid of jumping that shark.”

As for the actors who, along with the dedicated animators, are charged with bringing life to the multifarious goings-on in the Rick and Morty multiverse, the new season brings new opportunities to explore their multifaceted characters.

“Whenever Jerry gets to go to a darker or a more emotional place, it’s always gratifying and fun to be able to go there and do justice to the material,” says Parnell. “Like when they went to the therapy planet and Jerry got to see himself as a worm, as Beth envisioned him. Sometimes it’s a little more challenging, but it’s very satisfying to be able to play so many different aspects of the character.” Chalke too is delighted with getting to play different versions of her character.  “For me, with Space Beth, I was so pumped that it wasn’t just a one-off, that it was a situation that was going to recur,” she shares. “It’s a very different experience recording Space Beth. They’re completely separate because there’s such a swagger and confidence to Space Beth, and a different texture to her voice. It’s been a fun challenge to try and play two different characters that are also the same character.”

And even for creator Roiland, who, as previously noted, actually plays two different – and very interactive – characters, the novelty and the fun still haven’t worn off, even after five seasons and 51 episodes.

“I still have a blast doing Rick and Morty’s voices, and I’ll still do them back and forth to each other and improv and come up with things,” he enthuses. “And that’s a special little piece of the show. I mean, there’s not as much improv now as there was in the first two seasons, but it’s still there and it was always a favorite thing for me. I always thought it was so weird, the idea of just improvising something and then having all these talented people spend all this time animating and slaving over something that you just spit out in thirty seconds. The thought of that seems insane, but it’s also kind of this incredible thing.” And speaking of the tireless and gifted animators, Harmon, when asked about the dynamic between the writers and the artists, and what happens when something isn’t working, says that it’s “an interesting question.”

“I know that we’ve gotten more and more confident in our collaboration with the art team, to the point where we sometimes will hand them entire chunks of an episode and just say, ‘go crazy with this,’” he says. “In the vat of acid episode, the entire sequence where Morty is resetting his game saves was just this dream of the artists. It was a board-driven, rather than a script-driven, experience. But as far as getting something to work, we just keep trying until we get it. The way we stay on schedule is to actually let things go a little bit that maybe aren’t perfect on the page, and then we make these poor animators draw it, and then we watch a version of it, and then we go, ‘Uh, this isn’t quite working.’ And I’m sure most of them roll their eyes and go, ‘Yeah, no crap. Like of course it isn’t working. Why don’t you make the script better?’ So you could say it’s a collaborative process.”

As for the Big Question – why, after five seasons and 51 episodes does Rick and Morty continue to earn the allegiance of a rabid fan base and remain a perennial favorite of critics – actor Spencer Grammer has some ideas.

“The creators did a really great job in casting and picked some really unique characters,” she opines. “Parnell’s had a pretty prolific animation career already, and Sarah’s a hilarious comedian as well. And we all live in this universe, and there’s a very similar ’tude. But I also think the writing is exceptional. It always ties around the family, and there’s a heart to the show. You can be irreverent and satirical, but if you root it in a family, where we care about people and they’re multidimensional, it really allows us to grow and feel a human connection with the show.” “We all care and believe in the show,” Roiland affirms. “We believe in the characters, and we write up to the characters. That’s not to say that other shows don’t care, because I’m sure they do, but we’ve been very lucky in that the network has been very respectful of us and has made sure that what we’re doing is as good as it should be. I mean, not every episode is incredible, but there’s always something really cool and there are always funny moments. To be honest with you, I never would have imagined the show reaching the heights that it’s reached. But we have a very high bar of quality and, when we’re writing the show, that bar of quality is something that just follows us around like a curse, or maybe a blessing as well. But if you want something to be good, it’s not easy. And we want our shit to be good.”