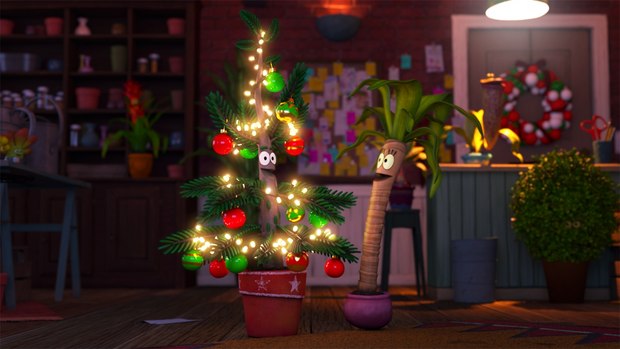 “The Dell T5810 and Redshift with the NVIDIA Quadro M6000 really came together for us, and allowed our artists to work in a way they'd never been able to before,” comments Eric Swanborg, Senior Director of Digital Operations for Nickelodeon. “They're able to work in near real time when lighting the scenes they're working on, which allowed us to create an entirely new pipeline for the way Nickelodeon has traditionally approached animation, giving them much more creative control than they've ever had before.”

The animated characters in Albert appear as though you can reach out and touch them -- it’s a look somewhere between photorealistic and stop-motion. The ability for artists to have near real-time reflections, shadows and interaction was essential to the project.

“We're trying to make great art as fast as we can and have it look as good as possible,” adds supervising producer Jason Meyer. “There's such a depth to everything. That's what I'm really excited about. I can't wait for the audience to see it. And now what used to take two to three hours to see a final frame is now taking just half an hour.” AWN sat down with Albert executive producer Chris Viscardi, who serves as the studio’s SVP of content development for Nickelodeon franchise properties, and David Steinberg, Nickelodeon Animation’s SVP of production, to learn more about the studio’s production pipeline and its very first original holiday special. Read the full Q&A, below:

AWN: Tell me a bit about the story behind Albert. What’s the TV special about and how did the story originate?

Chris Viscardi: The original idea for the special was pitched to Will McRobb, my executive producing partner, and me by Will and Aaron Eisenberg. They had a very sweet and funny idea about a tiny Christmas tree in a nursery who dreamed of becoming the most famous Christmas tree in the world. So, he travels to the big city to make his dream come true. That’s all they told us. Just from that pitch, we knew we wanted to make the film. The story felt so classic and sentimental, and it was filled with so much potential. From there, Will and I presented the idea to Nickelodeon, and they loved it on the spot as well -- we were off and running. That process began about two and a half years ago, and here we are, ready for the world premiere! Outside of figuring out the full story, the hero journey, and the adventures along the way, the biggest thing for all of us to decide on was the look and style of the movie. We all love the classic Rankin/Bass stop-motion animated holiday specials from years ago, so those definitely inspired us. But our SpongeBob SquarePants crew made an amazing stop-motion Christmas special a few years ago, so we knew we needed to do something different. That’s where David Steinberg and his production team, along with our brilliant director Max Lang, helped us settle on a CG production that would capture all that we love about stop-motion in terms of the tactile, hand-made feel.

We set out to do just that -- make a CG movie that looked like stop-motion in terms of set, lighting and detail -- and I’m proud to say that we pulled it off. The movie has a totally original look for Nickelodeon, which is exactly what we wanted for our very first animated TV movie.

Max Lang was the vision behind all the pre-production design and exploration. We were very fortunate to lure the brilliant artist Sylvain Marc to the production to help Max create the overall look and feel of the world and characters. Sylvain designed almost every character and prop in the movie. It was an incredible achievement.

AWN: What were the biggest creative challenges on the production?

CV: From a creative standpoint, our biggest challenge was trying to tell such an epic story in only 44 minutes. Albert travels a great distance to make his Christmas tree dreams come true. Finding the best way to take him on that journey with the ups and downs experienced along the way, testing his friendships and his heart, while trying to tell a meaningful hero journey too, was quite a task. And no matter how complicated the production may have been at times, we never lost sight of what was the most important thing, which was to tell the most meaningful, impactful and funny story as possible.

AWN: How much of your episodic TV production pipeline were you able to leverage to produce this special? David Steinberg: This feature represented a seismic opportunity for the studio to leverage its well-honed, efficient TV pipeline to make a high-quality feature in a shorter timeframe and with a far smaller budget than a theatrical show. It was a mash-up of production models engineered by our long-time CG episodic producer, Mac Middleton. We kept more of the shot work at our Burbank artistic hub, where we had greater creative control and ability to customize and sweeten the final product. Overall, we gave our team more time to nuance and re-work the designs and story than we have in our less forgiving episodic production schedules, but still maintained a baseline of TV show discipline. We incorporated service work in the pipeline, but there was much more interaction with Bardel Studios, our Vancouver partner, on the animation -- we reviewed dailies and made notes every step of the way, a luxury we don’t have in a standard TV pipeline.

AWN: How long did the production take? How big a crew? And what were the main production software tools used?

DS: We were in production for two-and-a-half years. We had 30 people in-house on this end and 10 animators at Bardel. We used Maya 2016 for our animation along with Zbrush for some of our assets. We used Redshift as our render engine and composited in Nuke. Except for primary and secondary animation, we handled everything else in-house. That included doing all the pre-production, layout, lighting, rendering and comp work under one roof.

AWN: Why the decision to use Redshift? How does it compare to global illumination technology used at major CG studios?

DS: We decided to try out Redshift, which utilizes NVIDIA GPU hardware to perform its calculations, instead of the CPU hardware-based systems used by most feature productions. Global illumination involves millions of calculations that trace light rays and their interactions with all the surfaces in the scene as a way of simulating real-world light. This is done for many high-budget theatrical animated movies these days. But our challenge was to create the same effect on a scaled-down budget and timeline. By harnessing in-engine video cards, rather than a CPU farm, we were able to make all those calculations go much faster, which allowed us to up the quality of the images in less time than typical feature render pipelines.

AWN: So how did the render software switch to Redshift change the production dynamic? What were the biggest gains it brought you?

DS: Redshift changed things quite a bit. Our render farm had to be updated with high end GPUs and the rendering was sequestered to a specific farm we created just for this production. The biggest benefit we saw from Redshift was the photorealistic quality it delivered and the speed at which it delivered those results.

Our adoption of technology is 100 percent project-driven. Nickelodeon embraces the creative notion that every project is unique and, from a production standpoint, there is no one-size-fits-all pipeline. When we talked with the network about this first Nickelodeon original animated TV movie, the creative desire was to have a look that felt tactile and closer to stop-motion than other CG we’ve produced. We brainstormed on the best way to achieve this. We wanted to use global illumination, so we experimented with Redshift and decided to add this new software to our toolkit.

Redshift is now another tool in our ever-expanding studio toolbox, and the testing we did on this production means that we will be that much more ready to use it again for projects that call for a similar kind of creative look and feel.

An Interview with Priit Pärn
‘Baymax!’ Provides an Rx for Humor and Compassion
How Digital Domain Brought Photoreal Characters to Life in ‘The Quarry’
SCAD GamingFest: Building Shared Story Experiences with Diverse Character Design
Mission Critical: ‘Lightyear’s Journey to Infinity and Beyond
Putting the Fun in Dysfunction: The Non-Humanistic Therapy of ‘HouseBroken’
‘The Freak Brothers’: This is Your Humor on Drugs
END_OF_DOCUMENT_TOKEN_TO_BE_REPLACED