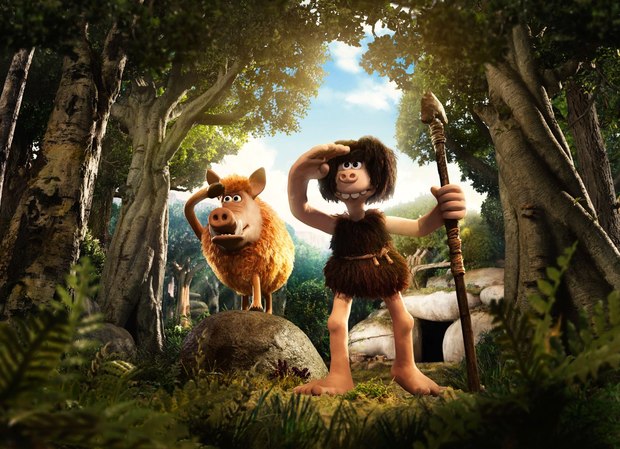 With seven Annie Award nominations announced this past Monday, including for Best Animated Feature and Outstanding Achievement in Directing, Early Man, Aardman Animations’ seventh animated feature film, has hit the ground running this awards season, a particularly noteworthy feat in a highly competitive year filled with hugely successful, high-profile animated films. For Aardman, like many pioneering animation studios, humble beginnings have led to both critical and financial success. But for Aardman, unlike most other studios, that success has come primarily from creative and technical excellence in one of the medium’s most demanding and exacting techniques: stop-motion animation.

And although they’ve diversified since their doors opened in 1972, expanding upon early commercial and short film work by moving into interactive, television and feature films, some in full CG, the company’s founders, Peter Lord and Dave Sproxton, along with their long-time right hand man, Nick Park, have never strayed too far from their successful formula of telling charming, light-hearted stories filled with odd, funny and eccentric characters. Early MTV music videos like Peter Gabriel’s “Sledgehammer” may have catapulted them to prominence, but tremendous talent and patient, evocative and hilarious animated entertainment of all kinds has kept them there. Aardman’s extensive list of award-winning work includes the Oscar-winning animated shorts Creature Comforts, The Wrong Trousers and A Close Shave, and the Oscar-nominated shorts A Grand Day Out and A Matter of Loaf and Death, as well as the Oscar-winning feature Wallace & Gromit: The Curse of the Were-Rabbit and Oscar-nominated Shaun the Sheep Movie and The Pirates! In an Adventure with Scientists! Park’s name is on all four of those Oscars (along with co-director Steve Box on Were-Rabbit), an impressive achievement by any standards.

Early Man, released this past January, is Park’s solo feature film directing debut, a more hands-off and challenging role that saw him devote the majority of his time to story, character design and production decision-making, rather than pushing puppets around a set. “Certainly, story is one of the big challenges on any film and takes a considerable amount of time,” he remarks. “For us, technique is kind of a given. That’s what we do as a studio. In a way, the personal challenge really, because I was sole director, was being pulled in every direction, every day. One minute, the puppet makers are wanting to know exactly what color and texture of some particular hair works best. The next minute, I’m in a meeting, where there’s a giant story problem, and there’s some big note from StudioCanal or something, and we need to figure this out, because the floor needs to know, because they’re shooting this next week. You’re being torn every day. But I do like to keep hands-on as much as possible, even in this situation. I had a big hand in the design of all the characters. I’m sketching, and I’m tweaking the final models, trying to get them more as I would want them. In a way, I make a rod for my own back, because I like to get involved. Whereas, if I stood back, and maybe sat by the pool, looking at the dailies, that would be easier.”

Despite tremendous advances in filmmaking technology over the last 25 years, including the rise of digital, Park still approaches his animation much like he did 30 years ago, on shows like Pee-wee’s Playhouse and his earliest short films, though the digital editing pipeline and CG tools Aardman currently employs make certain efforts much simpler and more time efficient. “Yes, we’re animating basically using the same techniques as we always have,” he says. “It’s just been made…there are ways to slightly make things easier, or safer, in terms of the shot turning out the right way. For example, we now shoot digital stills on Canon camera, and see shots more immediately. With the whole digital pipeline, as soon as that’s recorded, it goes up to edit, and you can do more with the shot afterwards. You might fancy flipping the shot, or using a bit of the animation twice, or cycling a little bit of it, or something like that, which you couldn’t really do before. It was more of a process at the labs. There are also things that used to take a heck of a lot of time before, that are much easier now. For example, if [Early Man’s hero] Dug is running along, leaping, once upon a time we would have had to suspend him on wires, or fishing line, and then be concerned that the wire isn’t seen, or reflecting, or anything. Nowadays, we just forget that. The animator can work quickly -- they have a metal rig behind, that’s adjustable, and they can just make him go as high or low as they like, and we just paint the rig out digitally.” One area where non-filmmaking technology has advanced state-of-the-art stop-motion animation is the use of 3D printers to fabricate large numbers of puppet replacement parts, particularly faces. Aardman, along with other studios like LAIKA, have used rapid prototyping processes that integrate CG animation, for example, of a character speaking, to drive 3D printers that generate literally thousands of replaceable faces, which an animator pops on and off a puppet for each shot.

For Park, however, he prefers a simpler, more organic look to his facial animation, so surprisingly, there was no 3D printing used on Early Man. “Back on A Close Shave, when we tried to take on more animators, who each had a more diverse style, we tried to make them conform with say, Wallace’s face, so it didn’t change too much. On Nightmare Before Christmas, they’d change the whole head of Jack Skellington, and had lots of pre-made heads. We wouldn’t replace the whole head, because we were scared that was too much change. But, we’d change the whole mouth area, because lip sync takes the longest. So, we would pre-make about 12 Wallace mouths, for all the different shapes, but keep them clay, so that the animator could still move them, and that way, it won’t seem too mechanical. They’d have to smooth over the lines themselves, but it still looked organic, and it was a heck of a lot quicker,” he recounts.

“Peter Lord, on The Pirates, used 3D printers, which are much more sophisticated really,” Park continues. “They had something like 200 mouths per character, for every slight possibility. Because the mouths were solid, not clay, you had to pre-make everything to account for a lot of subtle differences. I tend to work a bit more basically. I think because of the caveman aspect, and the primitive nature of my film, I wanted that to be reflected in the animation a bit as well. Use real fur, and furry fabric, don’t mind the fingerprints, and the slight wobbliness. It’s very nicely done, actually. We try to use clay as much as possible. Because the figures are handled so much, we mostly use latex for the arms, because it saves a lot of time cleaning clay. But, the original was clay, and it’s been molded, so it looks like it’s clay.” Though Early Man does make use of CG for certain set extensions, crowds, and other visual effects, Park tried to keep it to a minimum, hoping not to remove the audience from the film’s prehistoric story setting. “We did embrace CG on this film, and had to in lots of ways, but we were trying to keep the majority of things real as we could,” he notes. “A lot of special effects, much of the time, were used just to save time on production, and often money. For example, the general rule is that we use digital effects, like we did for flames inside the oven in Chicken Run, you know, things that once upon a time, we might have used cotton wool to create. But there’s a line drawn, between that and what I consider too much CG, that becomes distracting. Because it was a brand-new, expanded prehistoric world with volcanoes and everything, we went to CG quite a lot. And the football crowd was another example, where it would just be too expensive to make 10,000 puppets.”

While CG provides a host of possibilities for a stop-motion film, according to Park, it’s far from the cheapest way to make a film “The crazy thing is, there’s this myth that CG will be cheaper,” he explains. “I often get asked that, but it’s quite the opposite, and in fact, in Early Man, even though we had this football crowd inside the stadium, we couldn’t ever afford to show them close up, or have them in focus. We couldn’t afford the rendering. The cost was prohibitive. So, we could have our crowd, as long as it was slightly knocked out of focus.”

In addition to early Awards season nominations, Aardman has also been in the news recently because Sproxton and Lord have set in motion a mechanism by which the majority of the studio will be sold to the employees, financed by the company’s own profits. As reported last month on AWN, 75 percent of company shares will be transferred into a trust, which will then hold the shares on behalf of the employees. Senior management will remain in their positions and form an executive board, with Lord remaining in place as creative director, while managing director Sproxton will search for a replacement amid plans to shift to a consultancy role. Park will serve as a member of the new executive board. “Everybody’s very excited about it,” he says. “It really reflects Peter and Dave’s generosity, looking out for the future of the studio, the independence, the creativity, and the workers themselves, to have a cut in it all. So, everyone’s just thrilled, and I applaud it. I’m very proud of Pete and Dave for doing that.”