Nicholas Arioli Shoots for the Moon with ‘Coin Operated’ 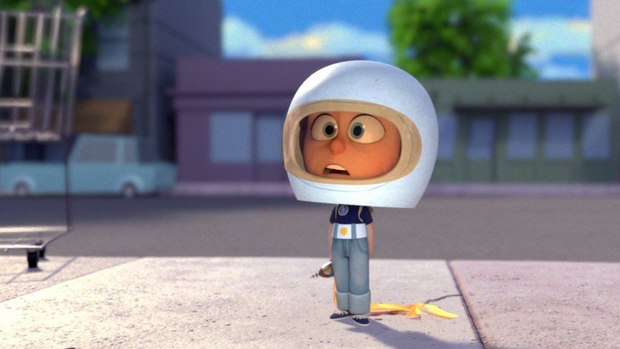 In the five-minute short, a young boy dreams of star-ships and space travel, opening a lemonade stand in hopes of financing his ambitions. Because becoming a space explorer takes time. And money.

Written and directed by Arioli, and produced by Jennifer Dahlman, Coin Operated has been selected to screen at more than 20 festivals, including the recent AFI Fest, where it played ahead of both Studio Ponoc’s Mary and the Witch’s Flower and Cartoon Saloon’s The Breadwinner. The short has won seven major awards along the way, including Best Short at the Rhode Island International Film Festival and Audience Awards for Animation at the Brooklyn Film Festival and the Palm Springs Int’l Shortfest.

Brought to life using Nimble Collective’s cloud-based production platform, Coin Operated will be presented at the CTN Expo held this weekend in Burbank. The short is scheduled to screen on Saturday as part of the Artella Saturday Morning Short Film Fest, and Arioli will also be speaking on a panel entitled “First Time Directors at Nimble” on Sunday, November 19th at 10:15AM.

An engineer by training but an artist at heart, Arioli spent years in the technology industry before making the jump into filmmaking. He was born and raised in New York City, and now lives in San Francisco. AWN had a chance to ask the first-time director a few questions about the making of Coin Operated, including production tools and processes, financing, and the genesis of the idea. Read the full Q&A below: How many artists worked on Coin Operated?

About 30 artists -- animation like this is very much a team sport.

How long did the project take to complete from pre-production through post?

For me personally, two years. Yeesh!

You don’t see much animation like this made independently, because it’s very hard to do outside the studio system. So I’m very proud we were able to make this movie as a collection of independent artists. A studio animation can cost upwards of $1.5 million dollars a minute. Our per-minute rate ended up being less than 1/50th of that rate. Shout out to my producer Jen and all the folks at Nimble Collective who made that magic happen! We managed to finance the short independently through the work of our wonderful executive producers.

How was the story developed?

I wrote the script based on an idea I’d been kicking around for some time. The script is only a starting point though -- you really figure out your beat-by-beat story as you get into the story reel and get to play with boards and the edit.

What was the process for creating storyboards?

Pretty standard here I think. [Storyboard artist] Josh Zinman took the first pass based on our conversations, then we went in stages, and refined, replaced, threw out, redrew, etc., etc., for a while until we felt we had something that was working. There’s things Josh came up with that were so good right away they’re almost exactly the same in the final version, and there are scenes we were still playing with in layout and even editing. Making a really tight movie is a process.

How was look development for the short achieved?

I did the initial sketches, and then we brought on the ultra-talented Willie Real to really find the look and feel of the movie visually. He and I sat in my San Francisco apartment and talked about the short, poured over bits of reference, and drank blueberry milkshakes until we were pretty mind-melded. When he came back a few days later he had nailed it almost straight out of the gate. Willie again. For characters specifically we were mostly on the same page right away. There is a character he and I were having trouble with for a bit, and he very smartly asked me if I were going to cast this character for live action, what actor would I want. It so happened I had that person in my head already (the great christopher plummer), and with that Willie had him.

What primary technologies were employed for rigging & modeling?

How was this pipeline developed?

Getting the pipeline and tooling sorted is critical for an independent production, and was all handled by Nimble Collective. If you’re trying to do something like this, I recommend checking them out.

How were assets for the film managed?

Nimble again, and Dropbox. We ran out of storage a few times, haha.

How did you get connected with Nimble Collective?

I was introduced to Nimble Collective co-founder and CEO Rex Grignon by a mutual friend, Dave Murphy. (Who went on to be our layout artist!) We sat down for a beer, I pitched him on Coin Operated, and before I knew it we were off to the races. Rex is the man.

What inspired you to make this short?

I was struck one day by the phrase “life savings,” which seemed to me both a melancholy and a hopeful concept at the same time. We can accumulate one life savings, and spend it on one grand thing. Our dreams and our mortality collide in this common phrase. I liked the interesting mix of feelings I felt thinking about that, and I wanted to distill that excited/doomed feeling into a film. I based the story around my own personal long-held desire to go into outer space.

What are some of your biggest animation influences?

I have never seen animation as separate from filmmaking in general. Animation is filmmaking at its most powerful, its least constrained. My filmmaker heroes are Steven Spielberg, Brad Bird, Robert Altman, Stanley Kubrick, Hayao Miyazaki, Sofia Coppola…I could go on for a while. Outside of film, Bill Watterson and his incomparable Calvin and Hobbes is a big influence.

To give you a sense just for animation, a few of my favorite animated features and shorts off the top of my head are Akira, The Incredibles, Spirited Away, Ratatouille, World of Tomorrow, The House of Small Cubes, Fresh Guacamole...so many wonderful animated films out there!

Hungry for more? Director Nicholas Arioli and Nimble Collective co-founder and CEO Rex Grignon will be delivering a livestream presentation, “Five Important Lessons: Behind the Scenes of the Award-Winning ‘Coin Operated’ Short,” at the Gnomon School of Visual Effects at 7:30PM on November 20th.