New DreamWorks Shorts Program Is for the Birds (and Marsupials) 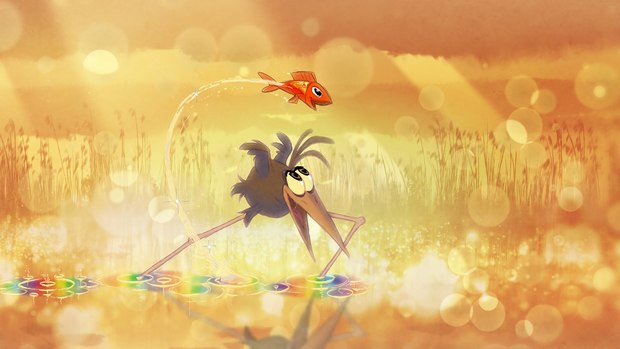 The 2016 transition from a publicly owned company to part of the Comcast-NBCUniversal family was rough and tumble for DreamWorks Animation. Gone was founder Jeffrey Katzenberg and in came a new wave of management. Among them was a new president of feature animation, Chris deFaria, tasked with managing the studio’s feature slate, which included sure-fire hits like How to Train Your Dragon 3 and less certain projects like The Croods 2 and Larrikins.

When both The Croods 2 and Larrikins were canceled (The Croods 2 has since been restarted), deFaria needed something to boost the morale of an idled creative workforce. While he recognized that making blockbuster features was essential for the studio’s bottom line, he also knew that an animation studio is deep down a creative endeavor. “Our competitive edge going forward was going to be how innovative was our storytelling, how innovative was our technology, and how committed were we to growing new artists and supporting some of the great artists we already had working there,” he says. “It didn’t take long to realize that a shorts program would do just that.”

A new shorts program opened, with everyone at the studio eligible to pitch. Twenty-eight projects came in, and the first two finished have earned the honor of bookending the 2018 Annecy International Animation Festival. Bird Karma, directed by William Salazar, opened the festival; closing it was Bilby, directed by Pierre Perifel, J.P. Sans and Liron Topaz.

The Beauty of 2D Animation

Bird Karma began life more than 20 years ago, when Salazar made a minute of animation of a bird dancing to tribal music -- just for fun. When the shorts program was announced, he boarded out a story to go with the animation and pitched it as a short.

“It wasn’t a pitch; he played us a reel,” says Jeffrey Hermann, the producer of Bird Karma and the overall shorts program. “It was gorgeous, even in that early stage, and we just wanted to help finish it right.” Told over richly toned watercolor textures, Salazar’s film features a long-legged bird that becomes enamored of a gloriously colored fish. When he finally captures and eats his elusive quarry, the karmic consequences prove highly unfortunate for him.

The short has a classic 2D look -- there are ink and paint credits, folks! -- and the rough, sketchy style is something Salazar says he has always admired. “As soon as [animation] was cleaned up, it lost something for me,” he says. “Keeping it rough allows the movie to have this handmade look, and that’s really important.”

The studio had to create a pipeline for the short because it no longer had one for 2D animation, says Hermann. Despite the handmade look, the film is produced digitally, with the backgrounds painted on paper and then scanned into Adobe Photoshop. TVPaint was used for the animation, and Adobe After Effects for the rest. “Every time there was something that looked CG, we tried to a make it look more handmade,” Salazar says.

The Indian music Salazar animated the short to turned out to be problematic. “Our intention was to try to acquire the rights for that piece of music, and we weren’t able to,” says Hermann. “We had to replace it, and we were nervous because it had to be a different piece of music, but it had to do the exact same job.” Composer Nora Kroll-Rosenbaum relished the task and exceeded everyone’s expectations. “The music went above and beyond where the temp music even was,” says Hermann.

While the first minute of the film was completed more than 20 years ago, the final three minutes were produced in about six months.

Bilby evolved directly out of the canceled Larrikins feature, on which Perifel, Sans and Topaz had been animators. It was a painful process to go through, Parifel says, but the shorts program gave them a way to re-channel their energy and ideas.

“We felt that the characters were so appealing and had so much potential,” says Topaz. “And one of the things we were thinking about is how can we basically give a metaphor of what happened to us.”

Bilby is about a small Australian marsupial trying to survive in the harsh desert of the Outback. When a fluffy, defenseless chick shows up, Bilby saves it from a predator—only to find himself having to repeatedly defend his new friend from a wave of attackers, concluding with a climactic confrontation with an eagle.

The animators decided to pitch late in the process, with only two weeks before the deadline. So they found a room in DreamWorks’ campus and started brainstorming. “We did not leave this room for probably two weeks, until we pretty much had the whole thing boarded,” says Sans. They worked on a consensus basis, ensuring that all three were in agreement on everything. Their entry resembled an animatic more than a pitch, and was the first project chosen to go into production, with the artists given full creative freedom.

“Short films don’t have as much scrutiny as the features,” says Perifel. “So we were left very free to tell the story the way we wanted to.”

When others saw the passion the directors were putting into the project, they wanted to join in. Among them was producer Kelly Cooney, another Larrikins orphan, who handled the technical issues involved with Bilby.

“It was really kind of an amazing experience how the new technology and the artists all kind of came together,” Cooney says. “The results speak for themselves.”

Bird Karma has been making festival rounds, something DreamWorks plans to do with all its shorts. Of the 26 original pitches, eight are in some form of production and the studio plans to roll out a couple per year for the next few years.

But the Annecy screenings will be the program’s arrival, and deFaria is thrilled to launch with so high-profile a platform. “It’s an acknowledgement of the accomplishment,” he says. “It’s also really an opportunity for our artists to be among their peers and show off a little bit about what we can do.”