New Animated Short: Find Out What’s Next for ‘Lost in Oz’

The team behind the Emmy Award-winning series shares its latest film, ‘Packing Magic,’ that picks up the story of Dorothy Gale, answering fan’s questions whether she’d return home to Kansas or start a new life among her magical friends and foes in the legendary world of Oz. 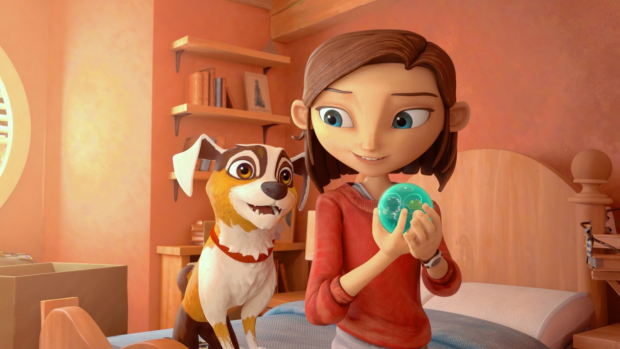 When production of the Emmy Award-winning Lost in Oz came to a standstill, fans were left wondering if the newest Dorothy Gale (voiced by Ashley Boettcher, Weathering With You) would return home to life in Kansas or start a new life among magical friends (and foes) in the legendary world of Oz.

The modern spin of L. Frank Baum's canonical Oz books is back after a brief hiatus to answer all the questions... and perhaps raise even more.

“At its core, Lost in Oz is a story about home,” said Mark Warshaw, executive producer and co-creator. “For Dorothy, we left her pondering the question, is home a physical place in Kansas, or is it where your closest friends and family dwell?”

The Dorothy Gale of Lost in Oz is a distant relative of the same Dorothy who was off to see the wizard decades before. Although they share the same name, the two characters are vastly different. “Dorothy’s greatest strength is also her greatest weakness: she can’t let a problem go unsolved,” explained Jared Mark, executive producer, and co-creator. “This trait helps her along the way, and it gets her in trouble oftentimes as well. She’s essentially a budding engineer.”

The newest Dorothy meets many friendly (and not so friendly) faces along the way that might be very familiar to fans of the franchise.

"We started the series by making a glossary of characters from the books to draw inspiration," said Mark. "We wanted to bring in characters with great story arcs. There are some deep cuts in there, too, like Dorothy's friend Ojo, who is based on a character named Ojo the Unlucky."

How do you revisit a classic story without stepping on any toes? The Bureau of Magic team masterfully refreshed the Oz stories while still paying homage to its roots.

"We wanted to honor the original books because they're classic, brilliant, and have a tremendously loyal fan community," said Mark. "We never had the hubris of thinking 'we can do it better.' So, how do you respect the source material without being beholden to it? We wanted to be free to create our own invention. That discussion continues; how do we incorporate all that we love from the original, digest it, put it aside, and launch out into something new from there?”

The success of Lost in Oz is a testament to how well-loved the Oz stories continue to be. Winner of the Emmy for Outstanding Children's Animated Program and nominated for seven more, the show was also one of Amazon Prime's top-rated original children's programs and has been broadcast on second windows in nearly every media market in the world.

The Bureau of Magic team used Bluescape, the visual collaboration tool trusted by the top studios in the entertainment industry, to bring Lost in Oz back in a big way.

“Bluescape has been an incredible tool in the pre-production process,” said Warshaw. “We used our Bluescape workspace to give all reference materials to our storyboard artist, the fantastic Mina Martinez. We were able to use Bluescape to concept new designs, show reference material, and to manage the board review process, as well.”

“It felt like we were all in the same room during the entire storyboard process. We're moving through virtual meetings at a much more efficient pace. Having the Bluescape workspace allowed for a more natural flow of creativity.” This is just the beginning of what's to come in the new adventures of Dorothy Gale, Toto, and their friends. Who knows what will happen next?

Go forth and explore more behind the scenes content here!