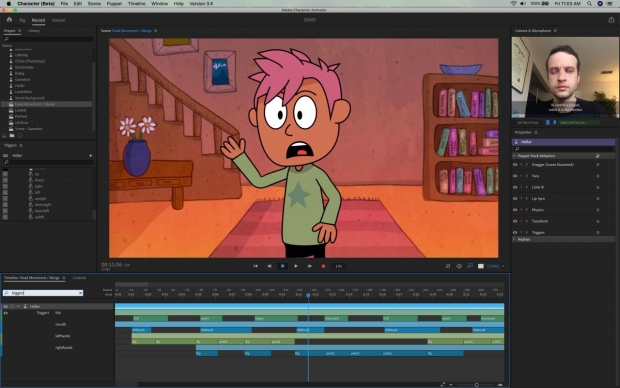 At a time when live-action content is challenging to produce, animation allows creation without restraints and with nothing more than our imagination, no matter what is going on outside. ATTN:’s Your Daily Horoscope has been a hit on Quibi. With 12 new segments each weekday, the use of the new public beta features is already making an impact. According to the show’s Supervising Director, Tim Herrold, “Our team utilizes a lot of hold takes to replicate a more pose-to-pose style that you’d find in traditional animation. This method can cause our timelines to balloon quickly but the Merge Takes feature helps us simplify them. Also, the new color coding of tracks has allowed us to make sense of complex timelines at a quick glance. The improved Lip Sync feature has saved us a lot of tedious correction work and improved our consistency across our large staff.”

The team at Nickelodeon behind The Loud House & The Casagrandes, Hangin’ At Home half-hour special virtually produced the episode using Character Animator. “In May 2020, while working remotely, the Nickelodeon team virtually created The Loud House & The Casagrandes, Hangin’ At Home special, which featured original animation of characters Lincoln Loud and Ronnie Anne having a dialog about what it’s like at home,” said Rob Kohr, Director of Animation and VFX, Creative & Design, at Nickelodeon. “To help make this happen remotely, we used the Character Animator beta lip-synch tool which saved our animators a ton of time by providing a much more natural lip-synch and allowing the team to work more collaboratively.” Tooning Out the News from CBS All Access is also benefiting from the new public beta features and improvements in Character Animator. “The new Lip Sync beta hits better and more often and has made live animation passes better out of the gate,” Stephen Brooks, Director of Animation, noted.

With the use of the Timeline Organization tools, such as Snap to Playhead and Timeline Search they can focus on their workflow to make it easier to adjust tracks after they're done, especially on more complicated shots.

Improved and streamlined Replay functions have helped to build a library of reliable and well-constructed animated segments that can be reused instantly. “This has made scenes where a character turns around or plays guitar much more manageable and at a higher quality than we'd ever been able to achieve in near-live use,” he added.

Try the new public Beta features now; Character Animator is available for download via the Creative Cloud desktop application and includes an in-app library of starter puppets and tutorials. More details about the public Beta program can be found here.

Taking an Old-School VFX Approach in ‘All Quiet on the Western Front’
‘Natural Habitat Shorts’: Like ‘Ranger Rick,’ But for Adults
Framestore Sets Sail on ‘1899’ with New Virtual Production Tools
Animated Characters: The Art of Babbitt – Part 1
Bruce Smith and Ralph Farquhar Talk ‘The Proud Family: Louder and Prouder’ Season 2
VFX is the ‘Thing’ for Tom Turnbull on Tim Burton’s ‘Wednesday’
We Need to Chat
F is for Flake: The (Not So) Great Animation Robbery?
END_OF_DOCUMENT_TOKEN_TO_BE_REPLACED