With director Joanna Quinn’s ‘Affairs of the Art’ up for an Oscar in the Best Animated Short Film category, the DG of Creation and Innovation at the National Film Board of Canada reflects on the long history of female filmmakers at the NFB and its history of success. The NFB has garnered more Academy Award nominations than any other film organization based outside of Hollywood. 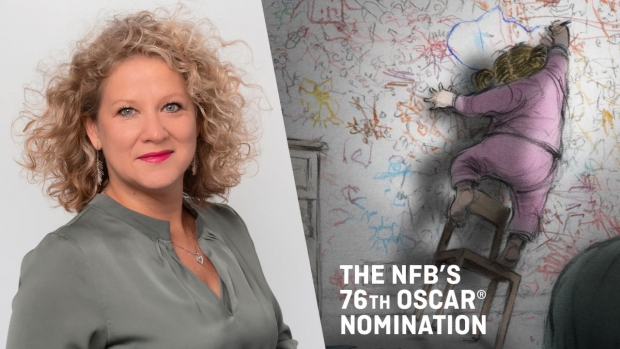 Julie Roy is a woman who knows animation. Having gotten her start as a marketing manager at the National Film Board of Canada, she moved up through the ranks to producer, then executive producer of the French animation studio, and is now the NFB’s Director General of Creation and Innovation. She’s the first woman with a background in animation to hold this position.

Connecting with creators for over 80 years

Auteur animation has a long and enviable history at the NFB. But how did it all begin? “You can trace the origin back to when Norman McLaren immigrated to Canada to open the animation studio,” Roy says. “Then he hired other foreign filmmakers to come and teach Canadians, who had no experience in the medium.”

“Our co-production philosophy is to go out and find great animators who can come and benefit from our experience and resources. A lot of the time, producers are attracted by our post-production facilities, specifically when it comes to sound,” Roy says. “We have a tremendous amount of expertise in that area.”

A case in point is Olivier Calvert, who was the sound designer on Affairs of the Art, a co-production with Beryl Productions International. Calvert was a part of Sylvain Bellemare’s team on Denis Villeneuve’s Arrival, which won the 2017 Oscar for Sound Editing. Calvert also worked on Cloutier’s Bad Seeds. After the recent round of Oscar nominees was announced, The Wrap calculated that only 28 percent of this year’s contenders were women. Even more starkly: Joanna Quinn is the only female director nominee among 13 directors up for an animation award, making the gender gap even greater in the animated feature and short categories.

The Best Animated Short category was established in 1932. Since then, only four women have won the award as a solo director (Joan C. Gratz, Torill Kove, Suzie Templeton, Domee Shi), but you can include another two if you count co-directors (Alison Snowden and Eunice Macaulay). Of those six films, three of them were produced or co-produced by the NFB.

According to Roy, “I’m overjoyed that the NFB has earned another nomination, and I’m thrilled for Joanna and Les [Mills, her creative partner]. This is Joanna’s second nomination, and it’s fascinating to trace her journey. At a certain point, you realize the value of having an artistic style that people recognize and enjoy.”

“Joanna Quinn is a virtuoso”

The buzz for Affairs of the Art began on day one. “It’s already collected so many awards,” says Roy. “There’s a tendency for animated shorts to lean towards serious subject matter, but I know as a producer I love seeing the more lighthearted, funnier films. And Joanna is a virtuoso at what she does.”

Roy is quick to add that the competition this year is fierce, noting, “I like seeing more films from other countries in the category. I think that’s partly a result of more and more Academy voters residing outside of Los Angeles and the United States—it lends more diversity to the nominations. It’s often hard to compete against the big studios, so I’m thrilled with this year’s nomination.”

The NFB has a long tradition of championing women filmmakers and paving the way for others to follow. In a similar vein, Roy feels that Quinn’s character of Beryl has paved the way for other women to express, without censoring themselves, their femininity onscreen—and not just in the usual portrayals of beauty or cartoon styles that we’re used to.

“Beryl is a total extrovert,” she shares. “She’s politically incorrect and stands in opposition to all depictions of women we see in animated films, especially cartoons. She swears, she drinks, she’s heavy and she’s very comfortable in her own skin. With Beryl, Joanna has tapped into a rich vein of women who disrupt. She’s been a pioneer for other women to follow.”

The challenge that lies ahead, for both the NFB and the animation world at large, is getting more women into creative roles. “When the NFB announced its goal for gender parity in 2019, we were already almost there,” Roy says. “Short, auteur animation offers a more flexible schedule, giving women the chance to balance work with motherhood. Also, it’s outside the commercial world, where the money is. Where there’s less money, there are more women.”

And that trend isn’t just at the NFB. In conversation with Marcel Jean, artistic director of the Annecy International Animation Film Festival, Roy learned that over the last 10 years, parity can also be seen in their submissions and selected films. “When it comes to student films over that same period, it’s mostly women filmmakers,” Jean says. “As they move into the industry, that will certainly have an effect on the number of films submitted and selected at festivals.” The transformation will be slower for feature films and series, but the trend is promising.

“For me, the real challenge now lies at the intersection of gender and diversity—finding the BIPOC women, the Indigenous women, to come tell their stories,” Roy explains. “We’re putting effort into getting these women behind the camera, actively going into communities that don’t know us as well, where we have less of a presence. That’s a more difficult objective than simple gender parity, but we are committed.”

2022 Academy Award nominee Affairs of the Art is a co-production between Beryl Productions International and the National Film Board of Canada. Presented by The New Yorker and the NFB, the film is currently streaming in The New Yorker’s Screening Room.