Narrative Shorts We Watched and Loved at OIAF 2016

The NFB’s ‘I Like Girls’ won the Grand Prize at the 40th anniversary edition of the Ottawa International Animation Festival, but here are seven other animated shorts from the Narrative competition we liked even better. 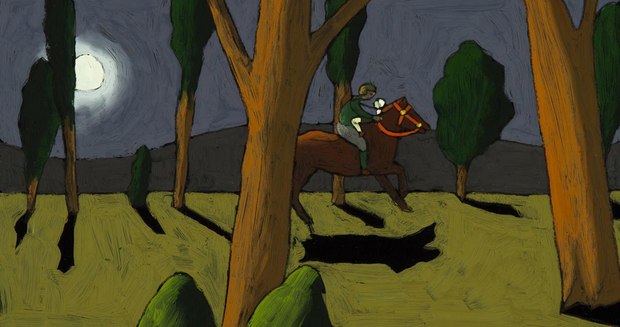 This year, the Ottawa International Animation Festival received a total of 2,311 entries from 86 different countries. Of those, 80 short films were chosen to compete at the 40th anniversary edition of the event, with the Grand Prize going to Quebec cartoonist and animator Diane Obomsawin (aka Obom) for I Like Girls (J’aime Les Filles).

Produced by the NFB, I Like Girls is charming, well made, and fun to watch, but the honor seemed more a product of the times than a true artistic award next to some of the other outstanding international entries at OIAF 2016.

Here, in alphabetical order by title, are seven animated shorts in the Narrative category that grabbed our attention:

This 3D animated short based on the works of cartoonist and designer Dave Cooper, who also wrote the script, asks viewers to consider what would happen if their worst fear and their greatest love turn out to be the same thing. Lost in a dark forest, Eddy Table stumbles upon a mysterious girl and dangerous parasites… While Blind Vaysha did not win the Grand Prize at OIAF 2016, it did receive awards for both Best Narrative Short Animation and Best Canadian Animation. Ushev’s 2D computer animated short describes what it’s like to be unable to live in the present: Vaysha is not like other young girls; she was born with one green eye and one brown eye. But her odd eyes aren’t the only thing that’s special about her gaze. Her left eye sees only the past. Her right, only the future. Like a terrible curse, Vaysha’s split vision prevents her from living in the present. Blinded by what was and tormented by what will be, she remains trapped between two irreconcilable temporalities. “Blind Vaysha,” they called her. A metaphoric tale of timeless wisdom and beauty, Blind Vaysha is told using striking imagery inspired by woodblock prints and 20th Century graphic design. In this hand-painted cel animation from one of the biggest names in contemporary animation, a father rides with his son through the forest. The sick child thinks he sees the Erlking, who both charms and frightens him. Based on Goethe’s poem “Erlkönig” and the music of Schubert & Liszt. This charming 2D computer animated short follows a man who is fired from his job on Mars. While reminiscent of last year’s terrific Oscar-nominated short by Russian director Konstantin Bronzit, What Would We Do Without Cosmos, it definitely stands on its own. Employing 3D computer animation and ink on paper, this lovely short provides gorgeous visuals and is a joy to watch. The protagonist of the film is a woman who trips and falls while rushing around the house. She gets up, only to discover that her home has unusual features -- it is built from paradoxes, filled with illusions, and covered with patterns. With a graceful and painterly feel, this dialog-free 2D computer animation is short filmmaking at its finest, providing tension, narrative and a powerful sense of unease.

Cut-out animation brings to life a story that is both disturbing and weird, and perfectly captures the experience of drunk driving. A badger lies motionless on a local road. A police patrol approaches the body in the dark. They soon realize that the animal is not dead; the badger is dead drunk! When the police attempt to drag the creature off the road, he wakes up and things take a strange turn…

There’s no trailer available for this one yet (Editor's note: WHY IS THERE NO TRAILER? WHY WOULD YOU MAKE A FILM AND ENTER IT INTO COMPETITIONS BUT NOT HAVE A TRAILER?) so here’s a selection of stills from the movie instead. If you get a chance, be sure to check it out:

UPDATE: Yay, they made a trailer! Here it is, courtesy of Bonobostudio:

The Massive Creative Fellowship Behind ‘The Lord of the Rings: The Rings of Power’
‘The Dragon Prince’ Director Villads Spangsberg Talks Toonlines and Tough Challenges
Laurence Fishburne and Steve Loter Talk ‘Marvel’s Moon Girl and Devil Dinosaur’
Taking an Old-School VFX Approach in ‘All Quiet on the Western Front’
‘Natural Habitat Shorts’: Like ‘Ranger Rick,’ But for Adults
Framestore Sets Sail on ‘1899’ with New Virtual Production Tools
VFX is the ‘Thing’ for Tom Turnbull on Tim Burton’s ‘Wednesday’
We Need to Chat
END_OF_DOCUMENT_TOKEN_TO_BE_REPLACED