‘My Sunny Maad’ Explores Life and Love in Afghanistan

Award-winning Czech director Michaela Pavlátová discusses her first animated feature, about a Czech woman who marries an Afghan man with no idea what her life will be in post-Taliban Afghanistan, which won the Jury Award at Annecy and has been nominated for a Golden Globe. 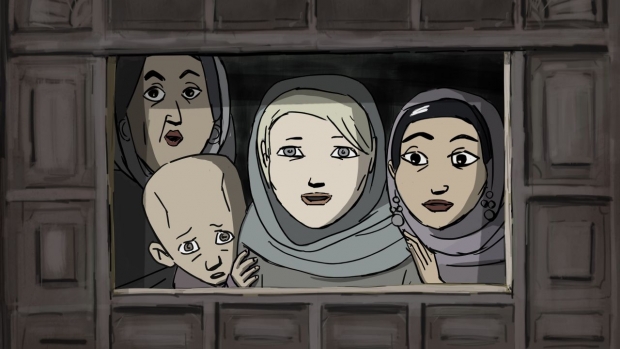 A young Czech woman named Helena (Herra, in Afghani) falls in love with Nazir, an Afghan man, and follows him to Kabul, where she moves in with her husband’s family. There she attempts to assimilate herself into a thoroughly different culture, where she faces challenges she never expected – such as the duty to hide inside a closet when guests are present – but also finds many unexpected blessings. Set in the post-Taliban Afghanistan of the 2010s, My Sunny Maad is a personal and poignant reflection on the diverse experiences of Afghan women, including the reality that not all of them are waiting to be saved by Westerners.

Based on a novel by Czech investigative journalist and war correspondent Petra Procházková, My Sunny Maad is directed by the Oscar-nominated Czech director Michaela Pavlátová, who won both the Annecy Cristal and FIPRESCI Award for her short film Tram in 2012.

The film, a co-production of Negativ, Česká televise, and Sacrebleu Productions, received the Jury Award at the 2021 Annecy festival and has been nominated for a Golden Globe as Best Animated Motion Picture.

In a wide-ranging and revealing interview, Pavlátová talked about directing her first animated feature, similarities between her and the lead character, and finding the right cultural and political balances.

AWN: How long did it take you to make the film, including writing, pre-production, and production? AWN: What drew you to this property and how was the decision made to change it to an animated film?

MP: I had worked with Negativ for many years. I made both of my live-action films [Faithless Games (2003) and Night Owls (2008)] there, and they also produced my animated shorts Carnival of the Animals (2006) and Tram (2012)] I had been trying for two years to write a script for an animated feature, but I couldn’t do it. Then I learned that Negativ were developing a live-action film based on Petra Procházková’s novel, but they were having trouble getting financing.

I read the book and immediately fell in love with it, so I called the producers and told them, "I want to make this book. I must do this book. It is made for me." I chose this book because I wanted something that wasn’t a typical subject for animation, something that would appeal to a general adult audience. I wanted to make an animated film for “normal” people, people who are not used to watching animation.

AWN: Do you think that animation allowed you to do things that you couldn't have done with live-action?

MP: It was more that I wanted to prove to myself, and to everyone, that animated actors can be as emotionally realistic as live-action actors. It was my selfish decision to make it this way because animation is my favorite tool and I just feel the strongest in animation. I directed two live-action feature films, but I feel that I'm not that special in live-action, that I can be more special in animation. AWN: Is that because you can have more of a direct hand in what actually gets crafted?

MP: Absolutely. Because in live-action film, I feel like I don't need to be there if they have a good script. I can give them some directions, but I'm not creating the new universe. It’s this kind of creator’s control. This is something which I like, and which fascinates me.

AWN: Where do you think your personal touch as a director is most visible in this film?

MP: Probably my touch is most visible in those stylized sequences that are in the beginning, or in the short and sparse imaginary sequences. But more generally I would say that it’s the whole film, because for every film I try to find the best tool for that particular film. In this film, I wanted absolutely to serve the script. That's why I didn't try to show off my style or emphasize the animation. I wanted the animation to serve the film, not to exhibit its possibilities.

AWN: Since you made the film, the US withdrew from Afghanistan after fighting there for two decades. The country is a lightning rod for so much attention and so much contention, including the treatment of women under the Taliban. How did you integrate the country's recent history to create a film that people would enjoy and would want to see?

MP: When I read the book, I was aware of its concern for human rights, and women’s rights, in Afghanistan, but for me what was most interesting was the intimacy of the family life and the relationship between Nazir and Herra. When she follows him to his native country, the relationship changes – he is different than he was when she met him in her home country, where he was a foreigner.

And this is slightly similar to my experience, when I followed my boyfriend to the United States. I also was suddenly without my family, without my friends, and just depending mostly on him. Of course, it isn’t really comparable, but I just knew how she felt. But Herra, in our film, enjoys being in Afghanistan with her husband. Of course she doesn't enjoy many other things.

So I started with the idea that this is a film about a family, about family relationships, which takes place in a country in the Middle East. For me, if the book was set in Morocco or in some other country, it would not have made a big difference. But then, while working on the film, I started to realize that it is not just a private story of boy meets girl, or girl meets boy – the political circumstances play quite a big part in it. But it was made before the US withdrawal, before the Taliban took power again, so it was a different situation. Also, on this film, there were tons of advisors and script doctors, and everybody gave me advice. I had very good people around me who helped me not to go too much here or there, who helped me to keep on track. AWN: What do you want audiences to come away with after watching the film? What do you hope that they're talking and thinking about?

MP: It would be nice if they would think that each person must be judged individually, that we should not see people as one dangerous nation that we have to be afraid of. It is very important to divide politics and individuals. In Afghanistan, as in every country, there are people who are kind and people who are not. But because we don't know them, we are afraid of them. You can disagree with the politics of a country, but once you have some personal experience, you find that there are so many fantastic people.