‘My Love Affair with Marriage’ Plays Matchmaker with Animation and Science

Signe Baumane’s new animated feature, in competition at Annecy 2022, employs her raw, incredibly direct and soul baring storytelling in a film about a woman’s huger for love and acceptance, and how the power of biology is a force she must contend with. 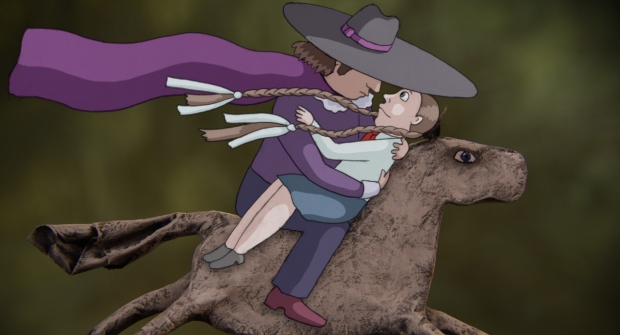 Right from the start, Signe Baumane’s animation proves it has earned a place in the hallowed halls of raw storytelling. Rough, storybook-sketched 2D characters are layered on top of highly texturized stop-motion backgrounds, detailing every paint stroke, scrape, sometimes even mold spore. And the imagery is just the start.

Be it her short film My Teat Beat of Sex, regarding her thoughts of sex every nine seconds, or her first feature Rocks in My Pockets, about how she and the women in her family battle with depression, Baumane believes in the power of putting one’s own life experiences out into the open in hopes of speaking one soul to another. That ideology is also the backbone of her newest feature-length animation, My Love Affair with Marriage.

Premiering at the Tribeca Festival on June 11th, and one of 10 feature films selected in competition at next week’s Annecy 2022 festival, My Love Affair with Marriage is a film seven years in the making, produced by The Marriage Project, Antevita Films and Studio Locomotive.

The hybrid 2D, 3D and stop-motion animated story follows the life journey of a girl named Zelma (Dagmara Dominczyk) from childhood into adulthood as she searches for love in an effort to feel whole. She’s told early in development by her mother, teachers, and classmates that marriage is the key to all her problems. That is, as long as she abides by societal expectations of how a girl should act. Over the course of the film, Zelma goes on a journey of discovery; experiencing the exciting throws of first love (albeit, one-sided), gaining her period then losing her virginity, entering into holy matrimony only to discover her husband is anything but. As the years, and marriages, go by and her desire for love battles with her desire for individuality and independence, Zelma finds that the more she tries to conform, the more her body resists. In truth, My Love Affair with Marriage isn’t a love story, but a story about the acceptance of the inner female rebellion. It’s also based on Baumane’s own personal experiences searching for love.

“But I wasn’t interested in making a film about my experiences as Signe,” says Baumane. “I wanted to make a film about my experiences just as a human being. I want to relate these very human feelings with other people. I want to communicate, ‘Here’s what happened to me, more or less, and here is what I think about it,’ or, ‘This is what my story is. Can you relate to it?’”

She adds, “We don’t tell stories because we want the spotlight on ourselves. We tell stories to convey something meaningful. That’s what I aspire to do with my work.”

Baumane’s journey with My Love Affair with Marriage actually began when she started writing a script with her Swedish ex-husband, who had come out as gender non-conforming or, as they like to put it, being a “gender bending” individual. They are depicted through Zelma’s second husband Bo (Matthew Modine) in the Film.

“I enjoyed animating scenes with Bo,” says Baumane. “There is a dramatic arc in their relationship, but they never lose their affection for each other or the interest to know one another.” And the desire between Baumane and her ex to dig deep and continue to get to know each other more fully was one of the reasons My Love Affair with Marriage was conceived.

“It was a very dramatic story, because he kept this secret and I didn't know or understand it at the time and it was a story I wanted to tell,” she explains. “But then my ex-husband was like, ‘Well, why did we marry? Why did we want to marry? Why was it so important?’ And then I started rolling back and asking myself, ‘Where does this idea first come from that we have to marry?’ Where does it start?’ which leads to another question of why we fall in love and, ‘What happens when we fall in love?’ If you want to find the answers to those questions, you must examine human neuroscience and biology.”

This was also how Baumane decided, when she officially began writing the script in 2015, to make the ambitious choice to interweave her story – filled with abstract imagery, symbolism, and philosophy – with detailed scientific facts about how chemicals in the human body dictate many of the decisions we make and the feelings we feel.

But not being a scientist and “not even scientifically inclined,” as Baumane puts it, the filmmaker had to learn about neuroscience from scratch.

“That was one of the main reasons why writing the script took one year and two months and twenty-three drafts,” she shares. “And I could not leave it to my own expertise either. I had doubts if I got it right, so I contacted NYU professor Pascal Wallisch, Ph.D., and asked for help. We met four times for very brain-stimulating three-hour sessions where Pascal would question or rip apart some of my research and send me back to my research table with his instructions. At the end, he gave me a compliment: ‘For an artist, you have a pretty good understanding of science.’” Baumane says that having science as the backbone for her film was not only a risk in that it wasn’t her area of expertise, but also risky when trying to make a film that audiences can relate to and, hopefully, connect with.

“A lot of people, when they start hearing science, just give a big yawn,” says Baumane. “So, the challenge was to incorporate everything that I learned while doing research for a year and make it engaging. Luckily, animation is a uniquely suited medium to incorporate science into a story seamlessly.”

In 2019, when Baumane and her team started to get ready to animate the biology portions of the film – where a voice-of-god-like speaker (Michele Pawk) walks audiences through the chemical interactions Zelma and other characters are experiencing when certain life events or powerful emotions take place – she once again began a long, many night’s journey into research, scanning through science graphics, trying to decide how to visually express the material in animation.

“I did some preliminary storyboards and hoped to collaborate with an animator who would not be afraid of the challenge,” says Baumane. “We were lucky to find such a collaborator in Yajun Shi, who has a unique visual style and also is not afraid of science, with her father being a medical professional.”

Wanting to make sure her visuals were as accurate as her script, Baumane says she still needed to run the animations by a real scientist. That scientist was TED Talks Science writer Elizabeth Cox.

“Elizabeth looked over our twenty-four biology segments and made suggestions for corrections,” remembers Baumane. “There were only two instances that she adamantly insisted we had to make major changes because there were new discoveries or developments that disproved my science research from 2015.” In short, the whole process was draining on Baumane, who was not only putting very personal parts of her own story out into the public for viewers to see and comment on, but also spending more time learning science than most animators bargain for in the profession.

“There were times when I had fits of remorse for choosing to write biology into the story,” she admits. “It was so painful and hard. I would go around the studio tearing out my hair and biting my nails because I did not know how to proceed with one biology segment or another. Scenes with visual metaphors and transformations were really easy for me. In my mind, I just step into a feeling or situation as the character and the images come without much effort. But every single scene with biology was a major challenge.”

Baumane’s hair-pulling nights paid off; from sharing saliva to firing neurons and brain anatomy, she beautifully animated depictions of the body’s inner workings during kissing, sex, menstruation, abuse, moments of anxiety and jealousy, as well as times of bliss and sincere intimacy.

“My favorite biology segments are about Oxytocin,” says Baumane. “You may have heard about Oxytocin as the ‘love hormone’ but it has more complex purposes and actions and some of it can bring us to the opposite of love. I could make a whole feature film only about Oxytocin and would not exhaust half of what this hormone does.”

Accuracy and visual appeal were certainly important factors in Baumane’s film. But the promotion of conversation was as vital since Zelma’s mother (wrongfully) believes babies are to broken marriages.

“I wanted people to say, ‘Oh, now I get why I was like this, because oxytocin does this and that and that’s how this other thing is connected,’ and so on,” says Baumane. “Falling in love and relating to other people, that’s partly biological and partly social, and I realized that a very private and personal experience gets regulated by culture and society because of what the experience is ‘supposed’ to be like.” Throughout My Love Affair with Marriage, audiences are taken on a rollercoaster ride with Zelma, wrestling with whether love is simply a chemical reaction or a real connection and if marriage is a byproduct of love or a duty bestowed upon individuals by their parents or society around them. In the end, the film shows that, no matter the answer, the importance of loving, accepting, and protecting oneself comes first and foremost before offering love to another.

It’s one of the reasons Baumane chose the symbol of a cat to often represent Zelma in the film.

“I see humans as part of the animal kingdom, so as people in my films move from one emotional state to another they may transform into an animal because an image of that particular animal shows their inner state better than anything else,” explains Baumane. “The cat is the symbol of Zelma’s independence, sense of sovereignty and her own agency. When it gets violated, it gets furious. I chose the cat as Zelma’s spirit because I see cats as independent, self-reliant, and able to defend themselves with any means available to them. You are not going to be able to pet a cat if it chooses not to be pet by you. I often found myself animating her with a big smile on my face.”

Animated Characters: The Art of Babbitt – Part 1
Bruce Smith and Ralph Farquhar Talk ‘The Proud Family: Louder and Prouder’ Season 2
VFX is the ‘Thing’ for Tom Turnbull on Tim Burton’s ‘Wednesday’
We Need to Chat
Choc Chip Animation Riffs on Pop Culture in ‘The Art of Murder’
F is for Flake: The (Not So) Great Animation Robbery?
Re-VIEW: ‘Avatar: The Way of Water’ – A Miraculous Vision
‘Kung Fu Panda: The Dragon Knight’ Celebrates a Special Lunar New Year
END_OF_DOCUMENT_TOKEN_TO_BE_REPLACED