‘My Hero Academia: World Heroes’ Mission’: A Diverse ‘Feast for the Senses’ 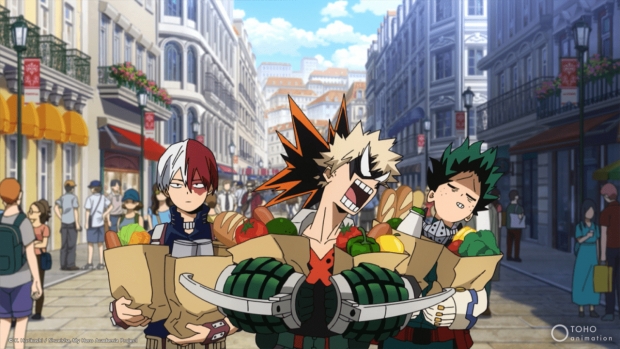 Since its U.S. release in 2018, Funimation’s My Hero Academia has become a powerful wave in the ocean of anime fandom. Its storyline - focused on a group of kids with various “quirks” studying to become superheroes – promotes inclusivity and diversity, showing that polar opposites can become the closest friends; it also dives into the often unspoken and sensitive areas of child trauma. All under the umbrella of exciting, fast paced action sequences that feel like cocaine for the eyes.

“To see a show like this become so popular and then steadily become even more popular over time, bringing more people into the fold, there's nothing else like it,” says Justin Briner, who voices the show’s main protagonist, Izuku Midoriya (“Deku”). “To be a part of something that is so widely loved, and for so many different reasons by so many different people, is amazing. It's so exciting to see how far it's come, and the future looks very bright.”

It’s a bright future indeed. With five seasons currently out and a sixth on the way, the franchise also welcomes its third feature film, My Hero Academia: World Heroes’ Mission, from Toho Co Ltd. which releases in U.S. theaters today, October 29.

“We had an inkling going into the auditions, and there were a lot of murmurs and whispers all those years ago, that this show might be something really special,” says Clifford Chapin, who voices gunpowder and flame-throwing character Katsuki Bakugou, and has been part of the MHA legacy with Briner since Season One. “But we could never have expected what it actually became, what it is now. It just exceeds all the expectations I could have had for it, and I mean that in every sense of the word.” My Hero Academia: World Heroes’ Mission follows U.A. High School hero academy students Midoriya, Katsuki Bakugou and Shoto Todoroki during their internship with Todoroki’s father and the Pro Hero Endeavor Agency. When an unknown enemy threatens global genocide on those with quirks - or superpowers - using specialized bombs, the three aspiring heroes and their fellow classmates all find themselves assigned to different countries in search of the terrorist weapons.

During the crisis, Midoriya meets a poor con artist named Rody Soul and, while simply trying to interrogate the boy about a mysterious briefcase, Midoriya ends up being framed by police for murder. On the run from the law, Midoriya and Rody reluctantly join forces to find out why Midoriya was framed, how it’s connected to the terrorist threat and why a strange archer woman is on the hunt for Rody’s briefcase that, while supposed to be filled with jewels, is actually just stuffed with strange documents.

In true MHA fashion, there are plenty of new villains and, consequently, epic battle sequences where favorite heroes exercise their powers like never before. “The art style, even just in stills, the composition of the shot, all of that is beautiful,” says David Matranga, who voices ice and fire-powered Todoroki. “And then when you put it in succession with the quick edits and what they show you in close ups, and what they show you as a master shot, it's stunning. Then you add in the music in the show, combined with the pace of the animation, it really does compel an emotional response from you in some way.” For Briner, the high-voltage action - whether a hero is charging at an enemy full speed, swinging through the air with civilians like Spider-Man, or launching a cataclysmic explosion attack from the tips of their fingers - can be a bit distracting, even in the recording booth.

“I try to stay on task as much as I can, but sometimes, you get these action scenes that are just so stunning you can't help but get caught up in it,” he explains. “You can tell there's a lot of love and craft put into making these sequences as good as they are because you just get lost in the music and the action and the drama of everything. Every new fight scene is another feast for the senses.”

And the feast continues even during the more serene moments, such as when Midoriya and Rody (voiced by Ryan Colt Levy) are making their way across country borders and MHA animators take viewers on a journey through a fantastical countryside, filled with flower fields and crystal-clear ravines.

“Sometimes, you don't even realize the visual dessert that is being given to you,” says Matranga. “You're not even aware of it. It switches between amazing action sequences to then a slower pace, but you're still getting that same visual pleasure.”

Patrick Seitz, who voices Todoroki’s father and famous hero Endeavor, adds, “I'm not spatial at all. I have no visual artistic talent, so to watch something like this that is so well done blows my mind. It’s like wizardry to me.” But as visually pleasing as My Hero Academia’s colorful, crisp and almost Cartoon Network-like visuals are, fans also gobble up the series’ ability to tackle complex relationships. Dynamics like the mentor and mentee, hero and villain, friend and enemy, and father and son are all addressed in the latest film.

“Throughout the entire series, these kids are growing up with the same goal - they want to become heroes,” notes Briner. “So, their goals are similar, even if their roads end up being very different. And they learn from each other, teaming up together and pushing each other to be greater than they are in this moment.”

He continues, “It’s nice to see that relationship grow with Rody in this movie. Deku has always been a very compassionate person, a very empathetic person. He leads with kindness and to see him and Rody, someone on the fringes of society who may not exactly trust people like Deku, get together and learn from each other and grow together, it expands the scope of this world that they inhabit. I think a lot of fans feel rewarded by that.”

And, according to Chapin, whose character Bakugou has quite a bit of experience opposing Midoriya, this arc not only rewards fans with a great story, but adds a sense of relatability.

“To see these characters interact and force each other to grow, and be forced into situations where they have to work together, that's tough and I think it's easy for people to see themselves in those experiences,” says Chapin. “That story feature has always helped people gravitate to the series, to this world, and these characters.”

“It enriches the story,” agrees Seitz, whose own character Endeavor shares a complicated and initially rather toxic father-son relationship with Todoroki. “There are plenty of franchises where the heroism, the spectacle, is the end-all-be-all. And My Hero has the powers, it has the spectacle, it has the high concept angle, but then it also has people trying to figure themselves out. Having characters who are not only heroes but also a father, a son, a friend, you get all those flavors together. It gives you that emotional underpinning and character development. It’s not just noise and flashing lights. My Hero Academia: World Heroes’ Mission showcases not only seemingly polar opposite friendships, like that of Midoriya and Rody, but also addresses the struggles of those living in slums and poses the moral dilemma of the struggle between doing the right thing and doing what one needs to survive. The film talks about corrupt leadership and discrimination based on misunderstanding. It’s a story, and franchise, that challenges individuals to not just be the best versions of themselves, but to see the best in others, even those who have been categorized as “villains.”

“It's complicated,” notes Matranga. “There's no universal answer. There's no, ‘This is good and this is evil.’ There's a little bit more of a gray area. We get backstories of the villains, which combined with the superhero culture and these heroes in training, have impacted people in a different way. This show goes up against very real, very human stuff in a way that other shows don't always fully land on.”

But it’s not just fans that the show has impacted. Its own cast has been moved by the characters and continues to be moved with this latest film’s release, and the promise of an up-and-coming sixth season.

“It’s really changed my life being a part of My Hero Academia,” says Chapin. “Its popularity, where the story has gone, everything just continues to impress. I'm thrilled and honored to be a part of it as much today as I was from day one.”

Animated Characters: The Art of Babbitt – Part 1
Bruce Smith and Ralph Farquhar Talk ‘The Proud Family: Louder and Prouder’ Season 2
VFX is the ‘Thing’ for Tom Turnbull on Tim Burton’s ‘Wednesday’
We Need to Chat
Choc Chip Animation Riffs on Pop Culture in ‘The Art of Murder’
F is for Flake: The (Not So) Great Animation Robbery?
Re-VIEW: ‘Avatar: The Way of Water’ – A Miraculous Vision
‘Kung Fu Panda: The Dragon Knight’ Celebrates a Special Lunar New Year
END_OF_DOCUMENT_TOKEN_TO_BE_REPLACED