Expatriate Iranian director Reza Riahi and producer Eleanor Coleman discuss their expertly crafted, dialogueless stop-motion short film about a musician, blinded by Genghis Khan - while taking his girlfriend as a slave/consort - who 50 years later, is summoned to perform at the castle where she is being held. 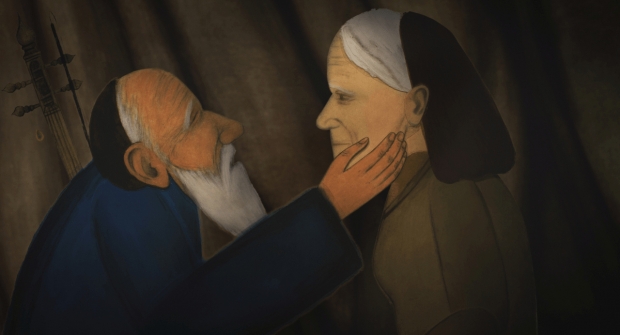 Even before the advent of CG, some animation techniques were decidedly the province of the few. Among these, the animation of paper cutouts, which director Reza Riahi uses in his short film The Musician, was certainly among the least employed. But, as the director notes, this painstaking approach allowed him “to take full advantage of the materials and motifs that Persian art has cultivated for centuries, the incredible tradition of miniatures.”

Set in the thirteenth century during the Mongol invasion of Persia, The Musician (NAVOZANDE in Persian) is the story of a young player of the kamancheh – a bowed string instrument – whose lover is abducted by the Mongolian ruler and carried off to his kingdom. Fifty years later, the musician is summoned to play at the Mongol castle where his beloved is held, which leads to a bittersweet reunion.

Reza Riahi was born in Tehran in 1987, and has lived in France since 2011, when he left his native country to study art and animation in Angoulême, then at La Poudrière. His graduation film Entre Chien et Loup (Between Dogs and Wolves) was broadcast on the European cultural channel Arte in 2014 and played at numerous festivals. Prior to making The Musician, he served as the artistic director on Nora Twomey’s multiple-award-winning 2017 animated feature The Breadwinner, for which he won Best Feature Film Character and Background Design at the 2018 European Animation Awards.

We spoke with Riahi and The Musician’s producer, Eleanor Coleman, about the genesis and production of the short, the decision to eschew dialogue, and the creative ramifications of being an expatriate.

First, take a few moments to enjoy the trailer; the film is now streaming on Paramount+:

AWN: Your previous film, Between Dogs and Wolves, was set in contemporary Iran and dealt with a soldier confronting his fellow citizens. What determines your choice of stories, and why did you go back to the thirteenth century for The Musician?

Reza Riahi: Living in France has allowed me to take a step back from my own country and to reflect on our unique history. The suffering of a people in the face of war or political occupation touches me particularly. I think it is important to take a close look at the consequences it can have on a life.

The idea for The Musician came to me about three years after I moved here. It was inspired by listening to the very traditional music of the kamancheh and by all the questions I was asked about my homeland. It made me want to know more. And I wanted to do a film that was a tribute to my heritage, to this resilience and to the hope that these people had and that we continue to have.

The Musician is the first part of a trilogy. It’s the roots, very past, very far away. The second one – which I finished writing and will produce with Eleanor again – is modern-day, like maybe 20 years ago. And the third one will be set in the future. AWN: What made you decide not to use dialogue?

RR: I didn't use dialogue in order to make it more universal. The music of the instrument is the only “voice” in the film. The score is traditional Persian music played by Saba Alizadeh, who perfectly translates the voice of the musician’s heart. His kamancheh sings softly, evoking a very particular atmosphere and feelings.

AWN: Before we discuss the animation and design in more detail, what drew you to this project, Eleanor?

Eleanor Coleman: I met Reza at La Poudrière. I almost always go every year to the final presentations. I loved his graduation film and I asked him, "What are you doing next?" And he said, "Oh, I have an idea." And I said, "Oh, that's great. I'd love to work with you." And he said, "Okay." And off we went.

We were really fortunate, because every fund that we applied to, we got. We received support from the Centre National du Cinéma, we got regional funding, we got fantastic support from Ciclic Animation, which is a place that's made to do stop-motion animation. And it just all built into this wonderful culmination of being at the Tribeca Film Festival and winning the award for Best Animated Short. Things start off as simple pieces of paper, and become this incredible experience. AWN: Can you talk a little bit about how the film was actually produced? What was the advantage of using stop-motion?

EC: The idea was really to honor Reza's vision and his love of miniatures. And the best way to do miniatures is in stop-motion, because you accept that odd perspective. And then, it also gave us a wonderful opportunity to do the flashbacks using shadow puppets. Of course we were very naive about the whole thing – it was like, "Okay, yeah, we can make a stop-motion film in two techniques with 200 puppets and I don't know how many backgrounds." But it just became this wonderful, organic experience where everybody on the team was really participating.

And they actually invented little techniques that worked really well. So you have these small facial details that change because they were erasing and redrawing. And there's just a lot of really beautiful detail, like when the king is hovering over the musician and you can see his hands trembling. Now, of course, it's all CGI – and they’re often beautiful productions. But when you get into this very intimate storytelling, with small teams and very committed, extremely talented people, you start to really discover the joy and possibility of handmade things.

RR: There's imperfection. Accidents happen when you do this. And that actually adds more to the storytelling, to the narration. Sometimes I hid from Eleanor how many puppets we actually had. But I was very lucky with the team. They were extremely talented, individual directors and artists, and they really loved the animatic. They were really present. AWN: Speaking of the animatic, how much preparation did you do before you started animating?

RR: For The Musician, we had to prepare everything because we had three months with the animators. Everything had to be prepared and catalogued in detail – left hands, right hands, what's moving, why it's moving. It was crazy. I had never done that before. And we had a really large list that I didn't share with Eleanor until later.

EC: Because I would have freaked out. But he did a beautiful job of archiving everything so that it was actually quite easy to find all the different pieces. And we didn't use [any project management software like] like [now ShotGrid]. We did our scheduling in a very old-fashioned way, where every small scene was a small drawing. We put it all up on the wall, and the animators would come and look and see which scenes they had to do. And then every day, the assistant director would move images from one wall to the other so we could see what was finished.

AWN: Reza, you worked as the artistic director on Nora Twomey’s The Breadwinner. Did that experience help you in making The Musician?

RR: The only thing I can say is that I watched Nora very, very closely, from the beginning through the end, and saw how she was listening and trusting. Especially of me, since I hadn’t art directed a feature before. But she put her trust in me and so I was more creative. And that’s how she was with the whole team. It was very inspiring how she was always listening, and accepting other ideas, and always trying to make it better. AWN: What do you want audiences to come away with after watching your film?

RR: Well, so many things, but I think mostly the idea of resilience. Even though the musician loses everything that he loves, he goes on with his life, he continues playing music. I had a similar experience, in a way, when I left Iran. I had to start again from zero. So I think that's what humans do. They go on with their lives – they don't stop painting, playing music, telling their stories.

EC: For me, it's a couple things. I want people to appreciate the power of handcraft, and how a technique can have such an influence on people and the way they absorb stories. It’s part of this amazing resilience that we all have. It's a testimony to the human spirit. And then, also, just the great storytelling power of short films. Hopefully more and more people will see them, and they will be appreciated as a medium, and more people will have the opportunity to make them. And I hope our film will inspire people to tell different stories in a different way. What I really am so proud of in this film is that it has a very distinct vision. There's no dialogue, it's quite classical in a way, but it shows the power of a strong, simple narrative and how that can move people.

Taking an Old-School VFX Approach in ‘All Quiet on the Western Front’
‘Natural Habitat Shorts’: Like ‘Ranger Rick,’ But for Adults
Framestore Sets Sail on ‘1899’ with New Virtual Production Tools
Animated Characters: The Art of Babbitt – Part 1
Bruce Smith and Ralph Farquhar Talk ‘The Proud Family: Louder and Prouder’ Season 2
VFX is the ‘Thing’ for Tom Turnbull on Tim Burton’s ‘Wednesday’
We Need to Chat
F is for Flake: The (Not So) Great Animation Robbery?
END_OF_DOCUMENT_TOKEN_TO_BE_REPLACED