In ‘Terror at 20,000 Leagues,’ premiering October 22 on Nickelodeon, the zany Bikini Bottom friends provide fans a ghoulishly good time, animated in a hodge-podge of styles connected with stopmo produced by Screen Novelties. 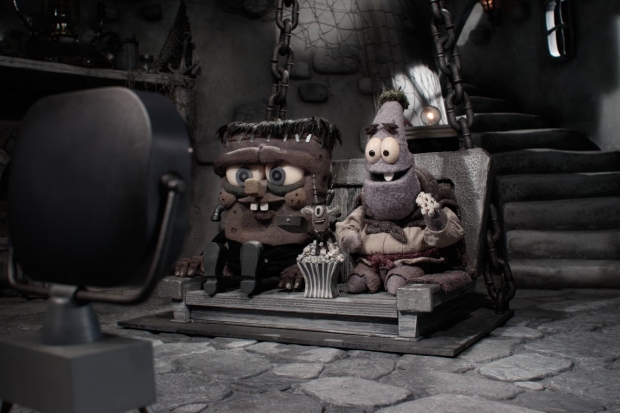 Patrick and his Bikini Bottom friends are here to give fans a ghoulish good time with Halloween stories inspired by spooky classics, a tidal wave of silliness, and a hodge-podge of animation mediums to jump-scare, or jump-start, viewers’ imaginations.

Nickelodeon’s The Patrick Star Show, “Terror at 20,000 Leagues” Halloween-themed special premieres today October 22 at 7 p.m. The show includes a series of stories featuring Patrick infiltrating the Planktonstein laboratory to steal some candy, a zombie brain buffet, werewolf hair boutique, and an alien attack, referencing Halloween classics like Aliens and The Bride of Frankenstein along the way.

“We structure each episode to feel like you’re channel surfing through Patrick’s cracked imagination,” explains Marc Ceccarelli, who co-executive produces the series with Vincent Waller and Jennie Monica. “It makes the show feel more like an animator’s playground. Especially for someone who loves gags and variety show styled sketches like we do.”

“This show is a cartoonist’s dream gig,” adds Waller. “The stories for The Patrick Star Show are more free form and I am elated we have so many different genres and styles to play with.” “These characters are so fun in every way,” says Seamus Walsh, co-founder of Screen Novelties with Mark Caballero and Chris Finnegan. “It makes animating them easier, because they already exude a kooky energy. But it is a real challenge to push and pull all of their proportions until they feel like appealing ‘puppetized’ versions of the characters we all know and love.”

The stop-motion segments, which connect the special’s other 2D Halloween stories, show a Frankenstein-esque Plankton with his SpongeBob and Patrick monster creations watching television on a stormy night and hiding away from angry villagers on the hunt for candy.

“Doing segments in different animation styles helped sell the parodies of different genres,” explains Ceccarelli. “We mostly designed the characters and backgrounds in these different segments to feel like different eras of TV animation. The sci-fi segments look like a cartoon, modern United Productions of America (UPA) style; the prehistoric segments were done in a desaturated crawling-line style; and we even did an episode meant to look like ‘70s psychedelic fantasy. For the 1940’s horror segments, we decided that a tactile stop-motion style would work best.”

“It was a really fun challenge to create a color palette that evoked old black-and-white films, but when you look closely, it’s clear that it’s actually color,” adds Walsh. “We even get into things like the feeling you get from different textures and how those play into how you feel about the character. I love working with our puppet team on all of this and I think everyone did such a lovely job.”

But the biggest challenges that both Screen Novelties and the 2D animation teams faced were the moments when 2D characters entered the stop-motion world, like unwelcomed trick-or-treaters who egg and toilet paper Planktonstein’s lab, or a 2D Patrick Star who tries to climb through the laboratory television so he and sister Squidina can rampage the monsters’ abode for sugary sweets. Walsh described the production process for those scenes as a “choreographed dance between the 2D animators, the puppet animators, and the compositing artists.”

“We had to do our animation at the same time as the 2D was being done,” Walsh explains. “So, we isolated major poses from the boards, used them like cutouts and then made our own rough composites so that everyone was on the same page about how the interaction was going to work. If we get our dynamics right and blending well with the dynamics of the 2D, then it’s up to the compositing team to use their tricks to make it all feel harmonious. I’m always wowed by what they can pull off. It takes a special talent to make all this weird stuff feel like they’re living in the same world.”

While the process sounds as chaotic as the scenes themselves, Walsh says it’s all “part of the fun” and what makes the show feel like a giant improv show, even though the process is highly coordinated.

“That scene, where Patrick leans into the stop-motion world via the TV screen, is so surreal and wonderful that it gave me goose bumps,” says Waller. “It has really been a blast dancing on and even crossing the line between 2D and stop motion.” Both Waller and Ceccarelli say they’re looking forward to more opportunities to incorporate stop-motion into The Patrick Star Show.

“There will definitely be more Planktonstein and Patgor shorts in the next batch of Patrick Star Show episodes,” promises Ceccarelli. “They’re our favorites and we love any opportunity to work with Screen Novelties.”

And Walsh is just as game for the idea. “Anytime we can mix live-action puppets with the stop-motion, I love it, because your brain starts to sort of question what’s being thrown at it,” says Walsh. “Seeing the two mediums interact does something to your imagination.”

Animated Characters: The Art of Babbitt – Part 1
Bruce Smith and Ralph Farquhar Talk ‘The Proud Family: Louder and Prouder’ Season 2
VFX is the ‘Thing’ for Tom Turnbull on Tim Burton’s ‘Wednesday’
We Need to Chat
Choc Chip Animation Riffs on Pop Culture in ‘The Art of Murder’
F is for Flake: The (Not So) Great Animation Robbery?
Re-VIEW: ‘Avatar: The Way of Water’ – A Miraculous Vision
‘Kung Fu Panda: The Dragon Knight’ Celebrates a Special Lunar New Year
END_OF_DOCUMENT_TOKEN_TO_BE_REPLACED