The Moneygoround: Liu Jian’s ‘Have a Nice Day’

From Strand Releasing, Chinese independent animated feature from the director of ‘Piercing I’ lands in New York on January 26th  and in Los Angles on February 2nd. 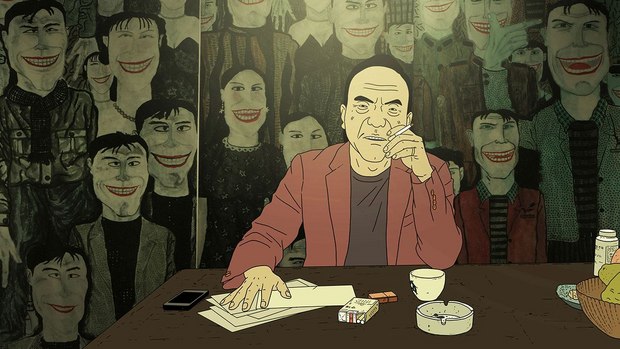 Oh, but life goes on and on and no one ever wins
And time goes quickly by just like the moneygoround
-- “The Moneygoround,” The Kinks

A slightly different Tolstoy quote from the same novel opens Liu Jian’s  acclaimed and modestly controversial (it was pulled from screening at the 2017 Annecy Animation Festival by the Chinese government for reasons not entirely clear) animated feature Have a Nice Day, but this quote also serves as a nice summation of this pulp-inspired crime feature that kicks off with a young man stealing a bag of money from a crime boss to pay for his girlfriend’s plastic surgery. From there, with echoes of Stanley Kubrick’s failed-heist classic The Killing -- except those characters had somewhat good intentions -- Jian (who also made the 2010 animated feature Piercing 1) takes us on a tense and torrid pace following an assortment of feckless, no good people as they menacingly and desperately meander through rainy dilapidated landscapes in search of the bag of money, which they link with freedom and their chance to finally escape their shithole states. While there are also clear reverberations of Tarantino in Have a Nice Day (e.g.: hyper-violent, overlapping storylines, and a whole lot of happenstance), this is more than an entertaining, turn-your-brains-in-at-the-door caper film. Jian’s story is a non-too subtle commentary on problematic aspects of contemporary China, as well as a meditation on globalization, hyper-capitalism and our endless salivation over the promises that cold hard cash offer.

“The movie is set in a town outside a small southern city in China,” says Jian. “And the trends of rapid urbanization and industrialization in the country change a small town like this in vivid as well as in subtle ways. I am fascinated by all of these changes and the people whose lives are affected by these dynamics”

Yet, as Jian, like Tolstoy, cautions that while we can keep on destroying each other and the landscapes, the sun will come up, the seasons with change, the water will flow. All this beauty around us and we just can’t seem to see it anymore -- as evidenced by the rather startling, serene intermission-like scene of water calmly flowing to open Chapter 3 of the film. Echoing, the film’s Tolstoy epigraph, the river just flows and flows, unnoticed by anyone, except us.

Throughout the film, the characters are engulfed by littered, broken and abandoned landscapes and buildings. Jian nicely uses those images to mirror the inner state of the characters, people who seem without hope, without dreams, all trapped in a hellish cycle that seems right out of Dante. “I use the minor actions and subtle movements of the characters to evoke their emotions,” Jian describes, “which, along with the vivid landscapes and interiors the characters exist in, constitute the poetic, and in some sense sad and melancholy, aesthetic philosophy of the film. The relation of human beings and the environment is coexistence. Without these people, this specific environment would not exist, vice versa.”

The tone of Have a Nice Day is equally intriguing with its fusion of relatively simple designs and the blending of stark realism with touches of magic realism: “My favorite artistic style (and in fact my artistic philosophy) is plain and simple,” Jian says. The elements of magic realism were born out of, well, reality. “There are so many uncertainties and possibilities to be imagined in such a dynamic and lively space,” he adds. “What some might call surrealism is often the reality there. In modern China, magic realism is happening around us almost every day. Life at times can resemble a surreal comedy filled with both jubilance and self-paralysis.” Sadly, this daily tragic farce isn’t limited to China as anyone living in the U.K. or U.S. can attest to during the last couple of years.

Technology also takes some punches in the film. Everyone is glued to their phone, some like zombies. Then there is the character Yellow Eye, who is constantly coming up with new innovations -- for rotten purposes. Certainly, Jian seems to suggest that technological reliance has also played a factor in creating this hopeless society. “Everything has two facets,” says Jian. “Even very great things could have side effects. But the level of the side effect depends on other factors. Technology is the same. We need higher IQ to invent greater technological products. But using these products lowers our IQ at the same time.”

And despite its sometimes wincing, violent imagery and swift pace, Have a Nice Day is an unusually quiet, almost calm film. The silence adds a feeling of claustrophobia and the sense that these people are all trapped in some sort of hell. “I was very serious about the music and soundtracks,” Jian relates. “I would rather not use any music if there is no best fit. Fortunately, we found great music [including two songs courtesy of the Shanghai Reclamation Project, a group that, aptly, combines traditional Chinese instruments with hip hop and electronica). Have A Nice Day is the kind of film that explodes its energy in a calm storytelling style with the simplicity of animation film language. Indeed, it was my intention to create the cold but powerful atmosphere.”

The downside of the film is that while is succinctly pinpoints many of society’s shortcomings, it offers no solutions in the end. Admittedly, there are no easy answers. We have dug ourselves a hole so deep, with systems that we have so intricately attached ourselves. How does one break free of a cycle we are so severely and complexly entwined within?