‘The Mitchells vs. The Machines’: A Scrapbook of Art, Nostalgia, and Killer Robots 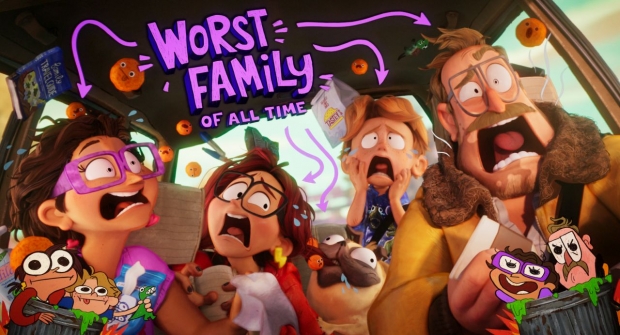 From car chases with a rickety old green-fluid-leaking station wagon and laser battles with futuristic robots, to sparkly cat-faced snapchat filters atop character dialogue and numerous memes and film montages of the cockeyed family pug, The Mitchells vs. The Machines aptly shows how a vast array of different visual styles and animation techniques can come together to create an eclectic, animated montage that beautifully celebrates the humor, and emotion, of an average family with nothing but their weaknesses to guide them through a sudden global machine apocalypse.

“The film does feel like a scrapbook,” says head of story, Guillermo Martinez, known for his storyboarding work on Missing Link and Kubo and the Two Strings. “When Mike told me, this film would be like Little Miss Sunshine meets The Terminator, I knew I wanted to work on an animated movie like that, something that feels automatically different.”

Written by former Gravity Falls scribes Mike Rianda and Jeff Rowe, who also serve as director and co-director, The Mitchells vs. The Machines begins with aspiring filmmaker Katie Mitchell (Abbi Jacobson) getting accepted into a California film school. But while the excited young artist - whose films often center around dog cops and rainbow spouting puppets - receives encouragement from her dinosaur-obsessed brother Aaron (Rianda) and sweet, star-sticker-giving mom Linda (Maya Rudolph), her woodsman father Rick (Danny McBride) questions both her art and the sensibility of her career goals. After accidentally breaking Katie’s laptop during a dinnertime argument, Rick tries to reconnect with his daughter by cancelling her flight to college and instead, taking the family on a road trip to California. Much to Katie’s complete dismay. And an already tense family dynamic steers out of control, literally, when robots from the tech company PAL Labs suddenly revolt and start trying to enslave all humans. Humanity's only hope for survival? Why, the Mitchells of course.

Rianda based our titular family on his own. “It felt like there was something really special about the project and it was really clear that Mike wanted to tell a uniquely personal story,” says production designer and lead character designer Lindsey Olivares, known for her work on Trolls, The Emoji Movie and Penguins of Madagascar.

Martinez adds, “Mike would get phone calls from his mom while he was working on the movie and he would say, ‘Mom, I can't talk to you right now. I'm really busy making a film about how much I love you.’”

But the film is much more than an elaborate family album filled with different animation styles, pop culture references - ranging from haunting Furbies to Journey album covers - and Rianda’s personal family anecdotes and memories. It weaves its narrative together with the personalities, tastes, and nostalgic leanings of many members of the production team.

“We had a culture on this production that was really fun, where we encouraged people to put a lot of themselves into the film,” Olivares explains. “Like, there’s a dog meme in this movie that includes a picture of a team member's dog, and a dog sticker on Katie’s phone that’s another person on the team’s dog. Names in the background came from crewmember names; if there's graffiti, we had people from the team create it. It was a lot of that and ‘How can we all touch this movie and put as much of ourselves into it as possible?’” Olivares’ biggest fingerprints are found in the Mitchells’ house, her favorite Cheese-Its and Pepsi snacks in Katie’s bedroom and her hometown’s cookbook animated into their kitchen. “Mike brings so much of his personal story to the film, but also left it wide open for anyone and everyone else to make that contribution as well,” says head of character animation, Alan Hawkins, known for Cloudy with a Chance of Meatballs. “It's almost like the ground level was his experience, and if someone had something better to offer, or more surprising or appropriate, it was always considered. It was extremely collaborative and, in addition to all the crazy hecticness that also came with it, there were a lot of people who felt very personally engaged with this project.”

“There's one scene where it’s a flashback video of Rick coming home and he is greeted at the door by a three-year-old or so Katie,” he continues. “I'd shown some videos like that which I had from when my son was about six. So that made it into a scene. Then, with other things like that, like when Katie picks up Aaron, that was referenced from picking up my own kid and throwing him around a bunch.”

According to Olivares, the goal of the film’s animation was to look as “touched” as possible, both in the personal contributions of the team as well as the actual texture and look of the characters and their surroundings. Though the character animation is a mix of 2D and 3DCG, there’s a Claymation-like aesthetic in this film illustrated through fiber textures and character movements. “It’s not Claymation, but we did have some reference points like that, with things being a little bit more matte, kind of a little touched or bent,” notes Olivares. “Clothes are a little bit more worn and lived in, a book should be kind of dog eared. The big guiding factor in how to design this family was that it’s a story about humans versus robots, and it really celebrates our imperfections. So, it felt like, in every way possible, we were thinking, ‘How can we make them as human as possible?’ And that’s what led us to a style that looked very hand-made.” Production was tedious for all the animators as they “chased real life,” as Olivares puts it, creating natural wear and tear from scratch, be it butter left out after dinner, tilted cabinets, faded polish on nails, stretched-out clothes, or disheveled hair after battles with robots. “In the real world, you get natural sets and age and all that stuff for free,” Olivares notes. “But, when you do it from scratch, everything has to be made specifically. It sets a really high standard and can be tricky, especially on a schedule.”

Character mannerisms also needed to feel naturally human and organic, which is where storyboard artist Hannah Cho came in, adding subtleties like Katie playing with or chewing on the strings of her favorite old hoodie as she talked or sat nervously. “When people talk, they'll fidget with whatever happens to be around,” Hawkins explains. “In real life, no one ever stands and just delivers a line. You'll be doing things as you're having a conversation. So, the movie is really filled with that kind of business, almost improvisation, with the goal being relatability.”

He continues, “Character animation is usually some kind of a slider, with extremely cartoony stuff on one side, and then mocap on the other. And so, you find where your bits and pieces are from each thing for each moment. This film is less cartoony at its core as far as emotional acting and acting choices. But then there are moments of exaggeration, and you make it entertaining.”

Some of those exaggerated moments come with what Martinez calls “Katie-Vision,” or inserted moments of 2D illustration or live-action video to emphasize Katie’s emotions or mood in a scene. “I describe it as Sony making a film and then this art student sneaks in during the middle of the night and does her own little take on the movie,” says Martinez. “We wanted Katie-Vision to feel like we're seeing her emotion through these drawings. The first time Mike mentioned that idea, I thought, ‘That’s genius.’” We see Katie-Vision in many forms during the movie, from 2D hearts coming out of Katie’s fingers as she texts to her friends, fiery cartoons in her netbook detailing kill-code plans, frozen frames of Aaron surrounded by raptors as he re-enacts dino behavior, or live-action screaming gibbon videos alongside her dad howling in fear as he speeds away from flying robots. While these scenes are definitely designed for meme-culture savvy viewers, Katie-Vision is also meant to show connection between family members; initially, only Aaron and Katie have Katie-Vision, but as the film continues, Katie-Vision begins appearing for Linda and Rick as well.

“I love caricature and I feel that was a huge part of my philosophy on this film,” says Olivares. “What you're doing as a production designer is caricaturing the mood of a scene, or just exaggerating it so that it reads really clearly for the audience.”

Capturing the right tone with that home-made, personally touched comedic caricature, alongside a sleek, stark technological apocalypse, took many versions and iterations to achieve. “One of the most difficult scenes that really set the tone for the whole movie was Dino Stop, where the family first comes in contact with the robots,” says Martinez. “In the first version, we didn't have the lasers that captured people and put them in ‘fun’ pods. In my first boards for that scene, I had the robots shoot lasers that hit a person who then falls on the ground completely stunned and not moving. And then we had this intense music playing as the robots grab the bodies and put them in a PAL Labs truck. So, I drew a mountain of bodies in this truck and when my wife watched it at a screening she was like, “What the heck is that?” And I'm like, ‘Yeah, I can see how it's a little too dark.’”

He continues, “So we had to redo the scene, but went to the other extreme with happy music and bubble wrap popping sounds when the lasers captured someone, and one of our executive producers was like, ‘Don't show this to anyone ever again.’ Finding that balance between those scenes was such a struggle. But it was always something we’d go back to and reference to make sure the rest of the movie was moving in the right direction.” As the team worked to find the visual and emotional balance between two opposing worlds, trying to integrate as much of themselves as possible into the story while still making it universally relatable for viewers, Martinez, Olivares, and Hawkins all agree that the anchor in this wacky and zany animated spectacle was always human connection. “A lot of parents, if you say you want to go to art school, and it's going to cost a quarter million dollars or something like that, they’re pretty skeptical and hesitant,” Hawkins shares. “I think a lot of our animators could feel that connection with Katie. I definitely did, and that brought a lot of special relatability to those scenes.”

“I’ve seen on social media people saying, ‘OK Boomer, computers are bad, we get it,’” Martinez adds. “But it’s not about that. It’s about the balance between a guy who doesn't believe in technology and the girl who really does and having them meet each other in the middle. If a father and a kid can go watch this movie, and the father can be like, ‘I like what that dad is saying,’ and the kid can be like, ‘I love what Katie is saying,’ but by the end, they both have this ‘I love you’ moment… that would be my dream. That’s all that matters.”