Mike Rianda Talks ‘The Mitchells vs. The Machines’

The ‘Gravity Falls’ creative director’s TV production skills got a thorough workout, and then some, in his animated feature film directing debut, now streaming on Netflix. 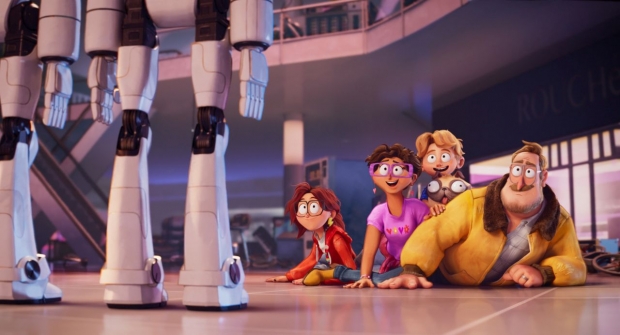 After a rather tortuous, 6-year path that included a name change, a name change reversal, a release delay, and an eleventh-hour online release deal, Sony Pictures Animation’s The Mitchells vs. The Machines is now streaming on Netflix. Produced by Phil Lord and Christopher Miller, the dynamic, Oscar-winning duo behind Spider-Man: Into the Spider-Verse, the new animated comedy about a dysfunctional family’s fight to reconnect… and save the world from a robot apocalypse has wowed critics and audiences with its offbeat humor, fresh animation designs, and unique storytelling style. Even in the darkest of times, dysfunctional family dynamics are grist for many creative mills, and The Mitchells vs. The Machines convincingly mines comedy and emotional gold portraying an out-of-touch dad’s skill at never missing an opportunity to miss an opportunity to connect with his daughter.

When Sony first approached Rianda back in 2015 with an opportunity to make an original film, he told them he was “overflowing” with ideas, which in fact, was a lie. He had nothing. When forced to come up with something viable, he combined the thing he loves the most – his crazy family – with the thing he loved the most as a kid – killer robots. The rest, they say, is history.

For directors like Genndy Tartakovsky and Rich Moore who make the difficult jump from TV animation to features, many of their time-tested skills serve them well, while others, not so well. Rianda’s experience was no different. TV animation is fast and furious, with smaller crews, budgets, and schedules. Feature film animation is an entirely different animal, pixels and junk food aside. And in a lively interview done just before his film’s April 30 release, an earnest and jovial Rianda shared with AWN that the long and crazy road from Gravity Falls, Oregon to Netflix hit wasn’t always what he expected. Dan Sarto: This film has had quite the journey, including a delayed release, a name change, a name change reversal, and a last-minute move to Netflix, bypassing theatres. Are you happy with how your movie finally landed?

Mike Rianda: Yes. Absolutely. People are like, “Are you worried that the release got delayed?” And I'm like, “I'm just happy I don't hate it!” I'm proud of it. And I think the crew is proud of it. That was one of my big fears, because on these movies, as you well know, there are so many talented artists and if you blow it, you’ve wasted their time, you know? I just want those people to be proud of what they did and feel like their time was valuable. The fact that some people hopefully are digging it, that’s wonderful, and really validates all the hard work.

DS: These films are behemoths, with so many moving parts. This is your first time directing a big, animated feature. Like you mentioned, you don’t want to blow it. How much pressure did you feel? How did you handle the fact that everyone on the film looks to you to make them feel, “No, our hair’s not on fire, everything will be fine?”

MR: There is pressure, you know… there is a lot of pressure. Some of the pressure we put on ourselves to make it good, or as good as we could. In terms of hair on fire, I'm not sure I was the best at that because I'm a very emotional person, and I’d be like, [speaking hesitantly] “All right… we're working it! It's going to be great, guys. It’s going to be great!” You know? The thing is, what I lack in terms of a poker face, I try to make up for in enthusiasm. And bringing in crew members to contribute on their own. These are brilliant artists, and if they can bring something to the movie, you want to encourage that. I've seen productions where, you know, the directors are like, “I got it… I'm the duuurecTOR.” And for me, I'm like, “I'm the director?” You know? I wanted everyone to feel like they could contribute. Just because it's my idea doesn't mean it's the best idea. So, whoever had the best idea won. DS: You come from the world of TV animation. This is your first time directing an animated feature film. That’s a big jump from Gravity Falls. How difficult has the transition been?

MR: It's been wild. It's so wildly different because you have to care so much more. The audience has to care oceans more about a 90-minute movie than a 22-minute episode of a TV show. Because if they don't, they will leave the theater. With a TV show, it's over quick… either it works, or it doesn't. From my own experience I know that if you're in TV, you're used to moving fast. You’re like, “Let's do 10 versions. Let's do this. Hey guys, what are we sitting around for? Come up with some gags.” You get used to that tempo, which is really valuable and sometimes missing in features. Sometimes with features, people are like, [hushed voice] “This is a feature, people… just relax.” There's certainly value in relaxing, but you know, in every stage of the process, you're remaking the movie. You have to make the movie to get it greenlit, and then you have to make the movie for real. And then there's some problem and you have to fix it. So, at every stage of the way, you're remaking the movie.

DS: In TV, you’ve got to make fast decisions. They may be right, they may be wrong, but we're moving on. Did that decision-making style help you on the film?

MR: Incredibly. One time, I heard a storyboard artist making fun of a feature film director. I won't say who or where, but it was that this person's motto should be [in a mocking tone] “Decisions, decisions!” As a director, your job is to make decisions. What are you so worried about? You know? With TV, there are all these time constraints. There's always a closing time window. But in features, even though you're working on only one thing, it's no different. There’s always some deadline. You have to prioritize. For example, you say, “OK, we’ve got time to reboard one scene and maybe do a couple revisions. What's the one calf that really needs milk?” When you’re going to screen it in front of an audience, you really have to figure out what is good enough and what needs to go through 10 more iterations. TV was incredibly valuable in helping me figure that out because you just have to let go at a certain point. This is good enough. And this isn't. We've got a day, so we can only focus on this thing. DS: Were there any times where you had to relearn, or consciously change how you approached things because the TV way wasn’t working for you?

MR: The biggest example of that was in animation. I'm used to, “OK, you do the storyboards, you send it overseas, they animate the storyboards, and that's it.” On Gravity Falls, we worked really hard on the storyboards to make sure they all worked beautifully. So, if someone just inbetweened the boards, it worked.  I erroneously took that attitude into the feature. I was like, “Just do the boards. Let's just do the boards.” And it was really bad. The artists were like, “I'm just inbetweening the boards? What is that?” I was used to a TV environment, and I was stifling their creativity. These animators, if you let them, they'll run wild, they'll make tableaus, they'll come up with beautiful ideas that you never saw coming.
But you have to trust them and say, “Yeah, try out whatever you want. If you have an idea, run with it.” And if in a couple days before we have to final the shot, it isn't working, as a fallback, maybe we go with the boards. But we don't have to. And it really livened the whole movie up. It unlocked all these artists’ potential.

DS: So, you started as the sand in the gears as opposed to the oil. DS: What would you say were the biggest challenges for you on this film?

MR: I wish there were an easy soundbite answer, but the biggest challenge on the film was just making everything work. Which is to say, if there was a joke, making sure the joke was funny. If there was a character, making sure the character was memorable. If there was an emotional scene, making sure it engaged the audience the right way. On the macro level, just getting the audience to care as much as they need to for a movie. Sometimes we were too flippant with the emotions in the beginning of the movie. You’d watch the movie, and it was like, “This is just a bunch of dumb jokes. What am I doing? What are we doing here?” We soon realized, if we lock the audience in emotionally early on, then we’re in.

Like seeing the audience gasp when Katie's laptop was broken. It was like, “OK, we're in business here,” because it meant they cared. The beginning of the movie, like the first 15 or 20 minutes, if that doesn't work, the movie is a disaster. And if that works, you have a shot. So that was probably the hardest, and biggest thing.

DS: What do you hope audiences come away with when they watch this film? What do you want to leave them with?

MR: I'm a sap. This movie is really about family. I hope after watching the movie, we can have parents try to understand their kids better, or have kids learn to appreciate their parents more, or learn that it’s hard to make relationships work, romantic or family. Because it’s so worth it. The thing that makes us unique compared to technology is relationships. They’re so important. They're kind of all we have, and they're worth fighting for. Basically, I just want to heal the world. That's my one goal.