The legendary award-winning director discusses her jump from animated shorts into feature films with the poignant tale of a Czech woman who marries an Afghan man with no idea what her life will be in post-Taliban Afghanistan. 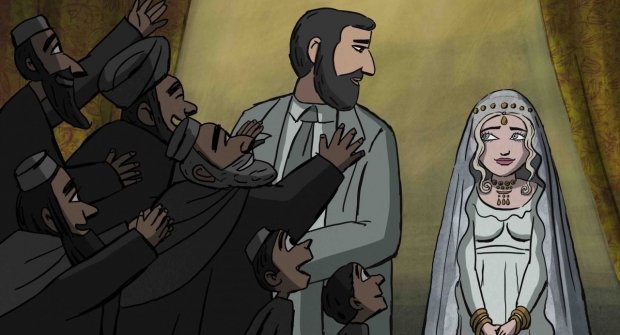 In My Sunny Maad, legendary Oscar-nominated Czech director Michaela Pavlátová’s animated feature film debut, a Czech woman marries an Afghan man with no idea what her life will be in post-Taliban Afghanistan. A co-production of Negativ (CZ), Česká Televize (CZ) and Sacrebleu Productions (FR), the poignant film took home the Jury Award this past June at Annecy; the director previously won both the Annecy Crystal and FIPRESCI for her short film Tram in 2012.

Her new film tells the story of Herra, a Czech woman who falls in love with Nazir, an Afghan, with no idea about the life that awaits her in post-Taliban Afghanistan, nor about the family she is about to join. A grandfather who is a feminist, an adopted young boy who astounds with his intellect, and Freshta who will do anything to run away from her abusive husband. Like the other women in the family, Herra wears a burka and hides in a closet when guests arrive. Soon she starts a new job with American woman, Heidi, who has little understanding of the way women live in Afghanistan, and even less that not everybody wants to be saved by Westerners.

Pavlátová recently spoke with the author about her latest, and most challenging, production.

Editor’s Note: In the time since the author wrote this piece, the US removed all its troops and officially left Afghanistan, ending its 20-year war against the Taliban. Lawrence Thomas Martinelli: With your first feature film My Sunny Maad you have made a leap from your previous production of short, animated films. How has it changed your way of working?

Michaela Pavlátová: If you want to make a long film, you need a big team to help you. This was for me maybe the most challenging matter because on my previous short films, I did most of the work by myself and had complete control on the film. This time, especially at the beginning of production, I was often frustrated because things looked different than I wanted, just because they were done by other animators, not by me. It took me time to accept this fact and to realize that something looks a bit different but that it works well in the film, and also, that it is not necessary to control each line, each shadow, each movement. I think, next time I have to stick more just to the role of the director, and not to enter that much “inside” the process.

LTM: Though “the story lays on gentle humor” as you have declared, for its themes and even style it seems to take on a much more serious tone than your previous shorts. What influenced this difference?

MP: I wanted to tell the story which is more for live-action film than for animation, in animation. Because I believe animation can do it. The story is quite realistic as well as serious and my purpose was to respect the script, the story, as much as possible. I attempted to put more humorous moments and funny situations to the film, as they are in the original book. But the script is quite a different format than the book and I felt the film is “refusing” some things, that the funny situations did not work so well, so I respected it.

LTM: Even the pace is slower compared to Carnival of the Animals or Tram. Is this due to the long format, the type of issue, or a change in your personal approach?

MP: I think that animated feature film does not have so much in common with short animation. Sure, it uses the same techniques, but the pace is very different. Short animations have a much faster pace, which is okay to watch for 10-15 minutes, but not for an hour and a half. They have a different “mode” of watching; the viewer needs to be more active to analyze symbols and metaphors because shorts tell the condensed stories. In long films you tell more complex stories, usually with more characters, more side storylines. You need time to build the situation, the emotions. But maybe my long film is just slow. I don’t know. LTM: The Afghan issue is faced also in other animated films this year. In which way did you relate to it?

MP: Yes, it is an interesting coincidence to see so many animation films about Afghanistan. In my case, I started my film without knowing about other Afghan films in development. I was not particularly interested in that country, but I fell in love with the book “Frista” by the Czech journalist Petra Prochazkova, which was based on her own experience living in Kabul. For me the most interesting was the changing relationship between the main character, Czech girl Herra, and her husband, as well as the element of being present inside the Afghan family, to find that families are very much alike whenever you live.

LTM: You have also directed live-action movies. What makes you choose between animation and live-action?

MP: In live-action, film things happen fast. All the time you are surrounded by people who help you, but you must make quick decisions - it is stressful but also exciting. It is nice to work with real actors, to see their interpretation of the role, as well as to experience the “stardust” which is missing in animation. But everything is so “real,” simply because it is a live-action film! I missed my “personal touch,” something that works in animation, where you create everything from scratch. I think I realized that I belong to animation. LTM: Besides teaching, you have become head of the animation department at FAMU in Prague. How do you cope with your various roles?

MP: Uhhh… sometimes it is not easy because all my roles are quite time consuming. But I really like all of them. I love making films, but I consider school, our team, teachers, and students, as my second family. I think I have a certain advantage of not having kids and having a very very tolerant and supporting husband.

LTM: What are your next projects?

MP: Now I want to give more time to school, but also, I am slowly preparing for the next film. I still think that the best form for animation is a personal short film, but I feel that my way now is to make another feature animation movie.

For ‘Loki’ VFX, Time is On Method Studios’ Side
Nailing the Unique, Stylized Animation of ‘What If…?’
Virtually Sensational: Previewing SCAD AnimationFest 2021
‘Star Wars: Visions’ Takes Japanese Culture and Anime to a Faraway Galaxy
‘Chicago Party Aunt’: Turning Life’s Sh*t into Mike’s Hard Lemonade
Talking Real-Time Animation with DNEG, BRON, and Chromosphere
France’s TeamTO Gets By with a Little Help from Their Friends
Another Chance at Unplanned Parenthood in ‘Teenage Euthanasia’
END_OF_DOCUMENT_TOKEN_TO_BE_REPLACED