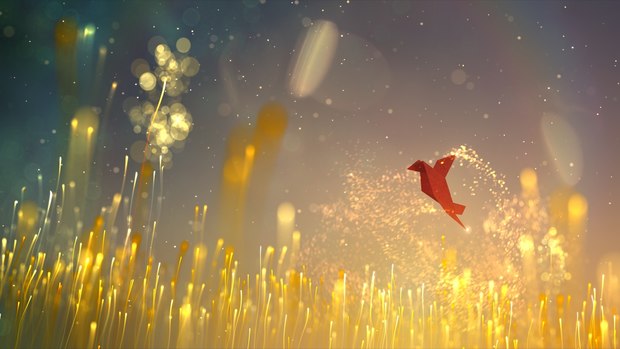 Featuring the journey of an origami bird inside a mysterious field of light, the video was created as an homage to the abstract animation style of Visual Music, taking on an aesthetic inspired by the work of Walter Ruttman and Oskar Fischiner but using modern tools.

It was made entirely using Adobe After Effects and Red Giant’s Trapcode Suite, the popular plugins for motion graphics and custom AE scripting. Except for the origami bird, which was created in After Effects from 2D layers rigged together in 3D space, all the elements were created using Trapcode Suite’s Particular, Form and Mir particle generators. Automated functions related to particles behavior were achieved with custom expressions and scripts written by Dan Ebberts.

AWN caught up with Marbach as he was headed to Tokyo for SIGGRAPH Asia to ask about the making of “L’oiseau qui danse,” including tools for rigging and environments, as well as some of the inspirations for the visuals. Read the full Q&A, which has been lightly edited for clarity, below:

How long did it take to complete the project?

All in all, I worked around two months on this project, not counting early production tests. The longest parts were finding a general look I was happy with, creating the 3D origami bird rig and designing its environment. Then once I was satisfied with the workflow and the first shots were completed, it was pretty fast going forward.

What were some of the visual inspirations?

Most of my ideas for the visuals came from Tennyson’s music and the title of the song. “L’oiseau qui danse” means “the dancing bird,” which is why I had the most original idea of featuring a bird fooling around. The choice of origami isn’t just because origami is cool, but also because it has an interesting low-poly vibe, and its stylized shape is easier to create with flat layers. Finally, the choice of a grass and flower environment just seemed natural for a bird. The lamp from Marbach’s living room.

So my only real visual inspiration was a lamp sitting in my living room. It features stylized flowers drawn by dots, and showed me I could create a whole field of grass and flowers just with particles. The main difference between the flowers on the lamp and my particle ones is the stem. The lamp features stems suggested by a few dots only, which works well on this simplified design... But with hundreds of stems overlapping in a field, it created a point cloud mess, so I decided to increase the particle amount on the stems to the point where you couldn’t make out individual particles anymore, and end up with a single clean line.

What is Visual Music, and how does that relate to your work?

I am not a Visual Music scholar by any means, but from what I gather, it originated in the 1920s as an attempt to translate music into visuals, either automatically with sound-induced electric impulsions (sometimes controlling a drawing device), or manually, using various animation techniques including stop-motion, drawings, or even scratching directly on film. Originally Visual Music was also 100 percent abstract, with no third dimension and little to no reference to the real world.

I’ll leave more competent people elaborate on the “meaning” of it, but to me, it’s a rare example of the triumph of form. The saying “form over substance” usually points at something negative... But to me, Visual Music is where form is meant to be experienced fully. I believe you have to dive in and let yourself go to fully enjoy it. I like to view it as a rare occurrence of form being the substance. Even if my initial creative process was inspired by Visual Music, the end result differs from it. Despite being stylized, my video is not completely abstract, if only because of the bird and the grass field. Also, I won’t call it “narrative,” but it has a certain logic to it, where event A leads to event B, etc. The other big difference is that it’s in 3D.

On the other hand, the area where I’m in line with classic Visual Music is in having a simple title describing the visuals, like Oskar Fischinger’s Komposition in blau, Len Lye’s Particles in Space, and Mary Ellen Bute’s Parabola. Even if in this case the title came first, “L’oiseau qui danse” simply features a dancing bird in its natural environment.

Aside from Adobe After Effects and Red Giant’s Trapcode Suite of plugins, were there any other tools in your pipeline?

How was the bird created?

The bird was created in After Effects with simple 2D layers rigged together with parenting and expressions in 3D space. For those interested, a tutorial I wrote on how to create this origami rig was published in issue 121 of 3D Artist.

Can you describe the workflow, such as how CG and particle elements were combined, and how rendering was achieved?

For each shot, first the bird’s motion path was set up in a draft version of his environment, and then the bird was rendered on its own in 4K. Although everything was created in After Effects, Trapcode tools operate in their own 3D space, so front and back layers had to be rendered separately in order to composite the bird back into its environment.

How many environments were there, and how were they created?

There were two different environments. The first one is the grass and flower field, created entirely with Particular and an extensive use of auxiliary emitters: for each stem, there was one invisible particle going upwards and emitting auxiliary particles in its trail. The particles floating above were created with Form, and the sky was created using Horizon and simple color gradients. The second environment is the weird, wispy and colorful cloud inside which the bird is “dancing” towards the end of the song. This was entirely created with Mir, perfecting a technique I came up with for a previous music video. (Mir was also used to create the origami totem at the beginning and the red wisps chasing the bird).

By the way, I regularly get requests for tutorials and tips on how to create this wispy effect, but unfortunately my Mir setup has become useless after the extensive rewrites on Mir V3, and the lack of background compatibility with previous versions. As I already told the folks at Red Giant during the pre-release tests, I was disappointed to see possibilities only available in AE with Mir being lost this way.

Did you use any custom scripts? For which portions?

I asked Dan Ebberts to give me a hand on a couple of features. For technical reasons, the bird had to be collapsed in a pre-comp, flapping its wings but stationary, and then animated along its path in the main comp. Dan provided me with an expression translating the flapping wingtips position data in the pre-comp to the main one, in order to parent particle emitters to them.

He also helped me keep a constant amount of wingtip particles blending in additive mode, no matter the speed of the flapping wings and the bird along it’s path. Many shots in this video would not have been possible without Dan, and I’d recommend him to anyone in need to go beyond native AE animation features. The benefit-cost ratio he provides is unbeatable. I’m afraid I don’t really have one. My approach is always guided by the project itself, and to some degree all my projects differ from each other. The only thing which guides me whatever the project is the fact that I won’t leave a shot until it feels 100 percent right. As long as I feel like something is missing, I’ll keep tweaking it.

What draws you to working with tools like Trapcode?

Trapcode tools -- like Stardust from Superluminal, which I’m using on my next music video -- are powerful and versatile plugins. The range of FX, animations and visual creativity they allow is impressive. They bring me creative freedom, and for an artist, that’s the biggest draw there is.