Matthew A. Cherry: 'Animation Can Do Anything Live-Action Can Do'

The Oscar-winning director of ‘Hair Love’ details how the animated election special for ‘Black-ish’ was brought from script to screen in just six weeks. 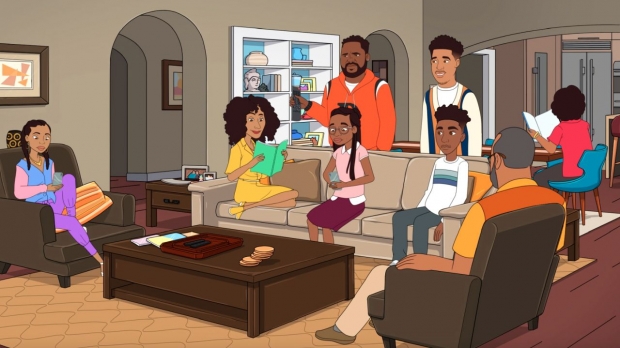 Leading up to this November’s high-stakes election, Matthew A. Cherry, the Oscar-winning director of Hair Love, took the helm of a special two-part episode of the ABC series Black-ish aimed at leading voters to the polls.

Part one of the hour-long election special, which kicked off Season 7 of the popular series, featured an animated music video produced by Six Point Harness for “Vote,” a new, original song recorded by R&B artist Jhené Aiko. The second part, which was written by Graham Towers and Ben Deeb, gave the entire Black-ish cast a complete ‘toon makeover in all-animated episode produced by Jonas Diamond at Smiley Guy Studios and Rod Amador at Big Jump Entertainment.

Cherry is a longtime champion of Black representation in Hollywood and beyond, and his Oscar-winning short film Hair Love celebrates Black culture with an intimate look at one family’s resilience and expression of love. “There’s something about animation that allows people to take their guard down and be more open to exploring worlds that you normally wouldn’t explore in live-action. I always say that if Hair Love had been live-action, I’m not sure it would’ve gotten the same love that it ended up getting as an animated short,” he remarks, adding, “The brilliance of Black-ish is that they’ve already established themselves as a force in live-action, so the animated episode just took it to a whole other level, and people were excited to see the family in this way.”

While animation can be used as a tool to help drive representation and awareness, Cherry says, it has the same limitations of any other medium. “I think animation can do anything live-action can do,” he explains. “It’s an artform not a genre. It’s all just a matter of who’s behind the scenes, creating the shows and putting the content out there. We definitely need more of us in positions of power where we can get our stories out there. I think that whatever issues you’re trying to raise awareness of are only as strong as the people creating the projects and in those positions of power.”

The animated episode took about six weeks to complete, from the script and first table read through to final delivery, according to Cherry. “It was a crazy condensed process that wouldn’t have been possible without the incredible teams at Smiley Guy Studios and Big Jump Entertainment,” he notes. “Especially Mathias Horhager, who was the co-director and dealing with a lot of the day-to-day in the animation pipeline.” As director, Cherry was involved in much of what he calls the “front-end stuff, like directing the voice acting, shot listing, making sure the blocking was right and how we wanted it to come across in the episode. Approving character designs, shots, props, backgrounds, a little bit of everything.”

Asked if he was involved in the development of animation’s visual style, Cherry answers, “Yes and no,” before going on to explain, “Black-ish is already a show going into its seventh season. The world and the characters have already been established, so it’s not like we were starting from scratch.” “The team at Smiley Guy Studios and Big Jump Entertainment have also done this before with the animated episode of One Day At a Time, so the idea was to try and achieve a similar style of making animated versions of these already established characters,” Cherry adds. “We wanted to make sure the designs were flattering, so if things felt off, we’d give feedback on how to correct them.”

“The goal was to make sure that the characters looked like themselves, and that it felt like a regular episode of Black-ish, but in animation,” Cherry continues. “There were some elements that we really heightened. Like with Leslie Stevens being evil and pressing the button to send the Washington Monument into outer space to blow up Canada. Things like that. But for the most part, we wanted it to look real, just with a heightened animated component to it,” he says.

Directing voiceover work via Zoom in the midst of a pandemic was definitely an experience Cherry had never had before. “Some people had to go to an actual recording studio, and some people were able to record from home,” he details, noting that these decisions were driven by the comfort levels of the individual voice cast members. “It’s kind of cool being able to direct voiceover from the comfort of my own home,” Cherry continues. “But it was definitely a challenge. It was hard not having that face to face time to connect with the actors in person, like how you do on a regular shoot. Luckily, I had already worked on Black-ish, so I had a rapport with the actors.”

Voting rights activist Stacey Abrams was a natural fit for the episode. “Stacey was great,” Cherry comments about working with the former Minority Leader of the Georgia House of Representatives. “She was playing herself, so we didn’t want to rock the boat too much. It was just a matter of making her feel comfortable and making sure she was talking how she would talk if she was doing an interview on CNN or something. That was probably one of the easier parts of it, making her feel comfortable and knocking it out.”