Disney’s ‘frog-out-of-water’ series, based on the creator’s childhood memories of sometimes awkward family visits to Thailand, was always designed to come full circle and wrap up its story of personal transformation after three seasons; 29-minute special Season 3 and show finale set for May 14 on Disney Channel and DisneyNOW. 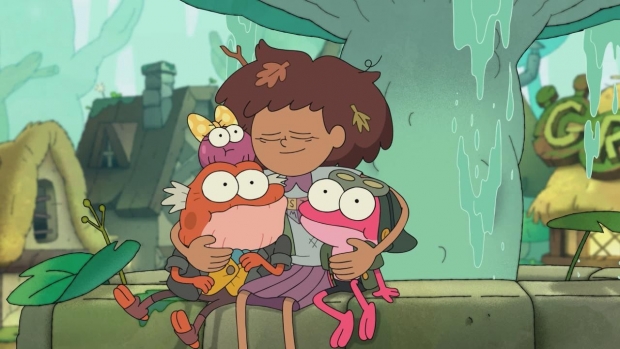 When aiming to tell stories of transformation, there are few better animal motifs than that of a frog - a creature that begins its life simply as a head attached to a tail before drastically changing into a hopping, croaking four-legged animal, able to thrive in both its original home waters as well as newfound land.

So, when deciding how to tell his own story of transformation, Amphibia creator, writer and executive producer Matt Braly decided an animated series featuring a world of frogs was the obvious choice.

“Outside of my just really loving frogs, the show is thematically so much about change, and frogs go through this very dramatic physical change in their lives,” explains Braly, previously a storyboard artist and later director on Gravity Falls. “It felt very cohesive. We even have a tadpole character who, at the end of Season 2, grows her legs. The other point was I wanted a high contrast between this protagonist and the world that she is dropped into. And based on the personality that we developed for Anne, it felt really nice to have her in this crunchy, muddy, grimy world of frogs, because it was absolutely something that she would have to learn to love. And that was important for her journey.”

Over its last two seasons, the Annie Award-winning and Emmy Award-nominated Disney series Amphibia has followed the adventures of 13-year-old Anne Boonchuy, who is magically transported from her quiet farm town of Wartwood to the fantastical marshland of Amphibia. There, among this community of frog people, Anne discovers both true friendship and who she truly is, becoming a hero during her separation from the life and people she’s always known. Amphibia is now in its third season, which will come to a close with a 29-minute special episode premiering May 14 on Disney Channel and DisneyNOW. This season, which features Anne and her froggy friends being transported back to Anne's home in the suburbs of East Los Angeles, will also be Amphibia’s last.

“Have you ever watched a show or read a book where you reach that point in the story that feels like a point of no return?” says Braly. “Where you’ve crossed the threshold, the stakes are higher, and there's an urgency to sort of finish the yarn? The end of Season 2 was that for us, where it really felt like the show wanted to end. From my point of view, I was like, ‘Well, we could do more, but it might be a little weird.’ We've all seen shows where it’s like, ‘Great story. But oh my god, why did they keep going?’ These characters have this beautiful arc and it's almost as if, by leaving the camera rolling, you did a disservice to their story.”

But, even before his series aired its first season, Braly had planned for the show to finish after three seasons, bringing Anne through major transformation and then wrapping the story with a full circle return home.

“The vision was always a story about this girl separating from her friends and defining herself for the first time, making connections outside that friend group, and becoming her own person,” notes Braly, whose series was first inspired by his own childhood trips visiting family in Thailand, where he felt like a fish out of water. “Anne returning to L.A. and connecting to her parents and her roots, where the whole journey started, was just as important to her story as everything else has that’s happened.”

He adds, “You get picked up for one season, hoping to get picked up for the second season. Then you get picked up for a second season with fingers crossed that you get the third season. I'll tell you that I only truly breathed a sigh of relief on this show when we got the season three pickup, because then I was like, ‘Oh, thank goodness, I can close this loop and tell the story that I've always meant to tell.’ As early as Season 1, I already had the final scene for the show in my head.” On top of Braly’s meticulous planning, ending the show at three seasons is also in character with the “theme of threes” Braly says the show took on over the last - you guessed it - three years.

Add to that list a frog’s three-part transformation cycle and the fact that Amphibia is a top three animated cable series among kids ages 6-11, it all seems rather divine.

“It’s wild, but I'm very pleased,” says Braly. “When we started, I would say that we did not have very much fanfare. And it took three years of exposure and three seasons of getting to know these characters and being with them on their journey to really build this community and popularity. In this modern area of streaming, it's more difficult than ever to make a splash and build a fandom. There are lots of amazing shows that just get dumped on streaming and that puts creators in an incredibly difficult position.”

But that difficulty also lent itself as an advantage to keeping Amphibia true to its heritage and grounded in Braly’s initial vision, rather than catering to public opinion as to how the show should play out.

“You always want audience feedback,” says Braly. “You're not working from the inside of a bubble. But it was nice because we could write and we could create without being influenced too much by the fandom. Sometimes it can be tempting to just let the fandom dictate the direction for the story. And that can seem like a really good idea. But, in practice, people want to hear from you. They want your vision and your story. So just try to stay true to that.”

He adds, “The more honest your story is, the more it will end up resonating with everyone. We had an art show in Alhambra for the series, like a fan celebration, and 100-plus people had come out to see it. To see this energy around the show and see, in person, how liked it is was really meaningful to me.” While Anne’s story will officially come to a close this season, Braly admits he wouldn’t be opposed to creating more side stories and shorts from the world of Amphibia.

“We've actually got a book coming out that will detail a lot of Anne’s friend Marcy's journal, and goes into a lot of her adventures when she wasn't on screen,” he notes. “And I actually don't mind the idea of a spin-off or continuation of shorts with these characters because, based on where the finale leaves them, the door is left somewhat open for certain content. I'd be totally excited to revisit that stuff, but after a long break.”

Since first beginning to pitch the idea of Amphibia in 2015, Braly says he’s been going through his own “rampant growth” and transformation as a creative during the show’s production and hopes, as Season 3 comes to an end, that audiences learn the value of their own personal journeys of change with their friends and family.

Taking an Old-School VFX Approach in ‘All Quiet on the Western Front’
‘Natural Habitat Shorts’: Like ‘Ranger Rick,’ But for Adults
Framestore Sets Sail on ‘1899’ with New Virtual Production Tools
Animated Characters: The Art of Babbitt – Part 1
Bruce Smith and Ralph Farquhar Talk ‘The Proud Family: Louder and Prouder’ Season 2
VFX is the ‘Thing’ for Tom Turnbull on Tim Burton’s ‘Wednesday’
We Need to Chat
F is for Flake: The (Not So) Great Animation Robbery?
END_OF_DOCUMENT_TOKEN_TO_BE_REPLACED