Marge Dean Brings Anime and Inclusion Together at Crunchyroll Studios

Diversity in storytelling and staffing is part of Women in Animation president’s mission as head of Ellation’s new Burbank and Tokyo development efforts. 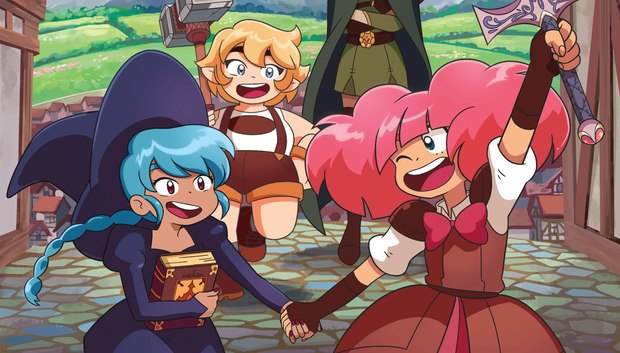 With the recent launch of Crunchyroll Studios, Ellation, an entertainment company within the WarnerMedia’s digital platform family, has made a significant move into original content programming, signaling their intent to provide anime fans on their highly successful Crunchyroll and VRV platforms with an ongoing slate of new properties that elevate animation as an art form and storytelling medium. At the heart of that expansion strategy is the original production division and its two new start-up animation studios, located in Burbank and Tokyo, where projects for both Crunchyroll and VRV communities are actively being developed and produced.

This past January, Ellation brought in production management veteran Marge Dean to build and run both studios. Dean, former GM of Stoopid Buddy Stoodios (Robot Chicken) and current president of Women in Animation, was publicly announced as head of studio for the new division this past August.

In addition to setting up studio operations at both locations, Dean’s mandate has been to develop original animated shows for both Crunchyroll and VRV brands – their first announced production, High Guardian Spice, is set to premiere in 2019. Billed as the first Crunchyroll Original Series, High Guardian Spice is the creation of lifelong anime fan Raye Rodriguez. Auda Paden (Animaniacs) is serving as supervising director. Little information has been released about the series, other than a short synopsis:

High Guardian Spice is a magical coming of age story where the lives of four fierce girls, Rose, Sage, Thyme and Parsley, converge at High Guardian Academy, the one place where they can stumble towards adulthood while becoming the heroes they've always admired. As they master the ways of battle and sorcery, our foursome form allegiances and comical kinships, uncover legacies and betrayals, and discover their true identities while preparing to protect the world from an ominous unknown threat.

One of Dean's goals has been to build a studio environment that fully embraces core principles of workplace diversity and respect. In fact, management support for building such a studio was what convinced Dean to take the position. “We're really trying to build the studio that we've all been talking about as far as diversity and inclusion,” she explains. “Obviously, being president of Women in Animation, that was one of the selling points that got me really interested in working here. But it's also something that we're incorporating into our development process, as well as the teams that we build. On High Guardian Spice, we have a 100% female writers’ room, which makes sense as it’s a show about young girls. And our crew is 50% female, very ethnically and LBGTQ+ diverse. What’s fantastic is that with our studio, I didn’t have to come in and change an entrenched culture. We’ve built it this way. This is the new normal. It’s pretty sweet!” Crunchyroll’s emergence as one of the world’s most successful digital platforms for anime distribution belies its rather humble beginnings. It was launched in 2006 as a file-sharing platform by a group of Berkeley engineers, who quickly realized that the heaviest volume of shared content was pirated anime. A 2008 venture capital infusion generated some controversy, considering the sharing platforms history with unlicensed content – in response, they started licensing Japanese animated shows, and soon thereafter committed to removing all copyright-infringing materials. Today, Crunchyroll has over 45 million registered users, of which 10 million are active each month. Even more impressive is their base of more than 2 million paid monthly premium subscribers, as well as a library of more than 1,100 titles and 40,000 episodes of the world’s most popular anime. Fans can access Crunchyroll directly in numerous languages on a host of digital devices, or as one of a number of premium SVOD channels on the VRV content aggregation streaming platform.

From a storytelling standpoint, Crunchyroll Studios aims not to redefine anime, but to tell stories that are inspired by anime. “We don't need to reinvent anime -- that's not our intention at all,” Dean notes. “We love anime and have tremendous respect for the art form. Out of that love and respect, we are looking to produce shows that are almost like an homage to anime…anime-influenced shows.”

While their storytelling focus may be highly specialized, the studio’s development pipeline is pretty tried and true. According to Dean, “What we're doing is pretty much what everyone does for development. Our sources are comics, games, original pitches, novels and the like. It's a wide variety…wherever we can find stuff. The deals we make with people vary based upon the properties and the creators. It’s pretty normal. And, our budgets are on par with everyone else. We don’t have Simpsons or primetime budgets, but I’d say we’re in the Nickelodeon and Cartoon Network range. We’re pretty competitive.”

Production is similarly being handled the same way broadcasters have produced their animated series for decades.  “In Burbank, we’re setup more along the lines of a traditional TV production model,” Dean says. “We’ll do all the pre-production, then ship the production over to either DR Movie or Lotto Animation in Korea. Then we’ll finish everything in post back here in Burbank.” “One thing that we love, that is amazing about anime, is that it's so varied,” she continues. “It touches on every storytelling genre. It’s different in the U.S., where animation is either for children, or for adults – it’s a kids show or a primetime comedy, or Adult Swim comedy, that sort of older, mature, more raunchy stuff. In Japanese anime, they do westerns, they do sci-fi, they do horror, they do comedy, they do adventure, they do rom-coms. Any story they want to tell can be told in anime. In Japan, I don't think they ever ask the question, ‘Why would this be animated?’ Whereas, in the U.S., we're asked all the time. We really want our slate to reflect that. So, we have several projects going that are very distinct from one another, that have comedic overtones and very dark, serious, post-apocalyptic sci-fi storylines. We go from one side to the other.”

For Dean, building Crunchyroll Studios provides an opportunity to focus her creative efforts on producing meaningful content for a highly specialized audience. “I remember the moment in my interview when the interviewer said, ‘Our belief is we want to be everything to somebody, not something to everybody,’” she shares. “I was like, ‘Holy cow, I wanna work there!’ My entire career, and I know it’s the same for so many people, you're always hitting up against the fact that you want to do these great, creative things, but they get shelved because they’re not commercial enough or won’t appeal to a mass audience.”

As a digital streaming platform, Crunchyroll gathers a significant amount of data about its audience and their viewing preferences. That helps Dean develop content that doesn’t have to please a more generic age and gender-based broadcast demographic. “That's part of the beauty of streaming. We have an active army of people that stay in touch with our fans and subscribers. We maintain direct contact with our audience. It allows us to go deep with our storytelling rather than having to spread it out, and therefore thin it out, across a mass audience.” That audience is also used to a quarterly release schedule of new shows, something Dean will eventually need to keep pace with. “There’s always pressure, especially in a new situation like this, where most people don't realize how long it takes to animate a show, especially using traditional hand-drawn 2D animation like we’re doing,” she explains. “That's what anime is and we're pretty committed to doing that. So, it takes a little bit longer. But I've explained it to everyone and it seems like they get it. We'll see once the shows come out. I’m aiming for a consistent flow of work, with a steady output of a show every quarter.”

Starting a studio hasn’t been without its challenges. “Finding the people to bring on, for me initially, was a challenge,” she says. “At first, it was me and two other people. But there are great people out there. It's also an interesting challenge to work with people that haven’t worked in entertainment. Remember, this is a tech company. Before I got here, there wasn’t really anybody who had very much production experience. But, I'm used to that. I used to work at Mattel. I've often have to work with people who don't quite understand what I do. And the folks here, they’re picking it up very quickly.”