Man’s Best Friend Has Demons Too in ‘Ghost Dogs’

Joe Cappa and J.W. Hallford’s film pays homage to rare childhood moments of self-discovery, like flipping through channels, stumbling upon ‘The Shining,’ which you weren’t supposed to watch, but did anyway. 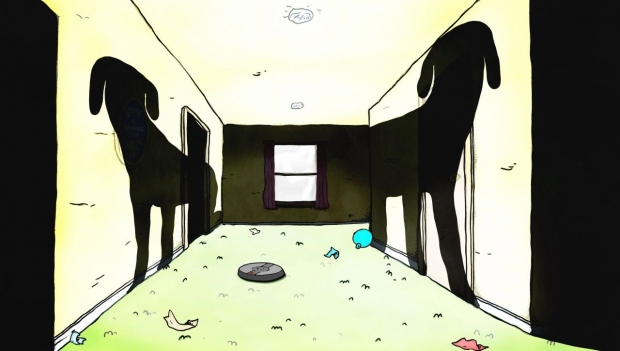 As a long-time cat and dog owner, I often spy one of my cherished nuisances playfully engaged with what I call “their imaginary friend.” More than just their usual mindless scattering about the house, these outings are much more focused and, actually, a bit creepy. So when I stumbled upon Joe Cappa and J.W. Hallford’s animated short, Ghost Dogs, an official selection at the just finished Sundance Film Festival, it finally dawned on me, “Ah, so that’s who Zoe has been running around with at all hours of the night. Ghosts.”

In describing Ghost Dogs, a film about a new rescue pup terrorized by a family’s deceased pets, Cappa explains, “We set out to make a cartoon that appealed to the adolescent inner-child. It’s an homage to those rare moments of self-discovery when you are 11 years old, flipping through channels, and you stumble upon The Shining by accident. The kind of content you weren’t supposed to watch but did anyway.”

For me, way back in the day, it was Invaders from Mars, the 1953 version, a film I should never have watched at an age far too young to understand monsters from other planets who hypnotized and kidnapped your mom, if they were actually real, wouldn’t have zippers running down the backs of their suits.

Check out the Ghost Dogs trailer:

Which takes us back to Ghost Dogs, a deceptively slow-burning horror film of sorts, with a cute enough rescue dog and his beloved tennis ball. For Cappa, a life-long recurring dream of being stuck in a haunted house suggested a mood he wanted to recreate. “It was very important for me to tell a story that took place inside well-lit rooms with a lightning storm happening outside,” he shares. “It’s such a vibe!  So, I knew I wanted to tell a story that takes place in a haunted house, but that story’s been done to death, so it had to be strikingly original.  When it comes to horror movies, there’s nearly an endless list of tropes.  One trope is when a family’s dog seems to be reacting to something unseen to the family.”

“What if that trope about a dog seeing ghosts was the entire movie,” he continues. “What if the dog could see animal ghosts but not human ghosts? What would that story be?” The story practically wrote itself once Cappa had a premise in hand. “It was very fun to brainstorm because I was entering new territory that hadn’t been touched upon, so I had free reign to go wherever I wanted,” he adds. The director was experienced in stop-motion but not 2D cel animation. “Considering I was starting on a two-year journey it quickly became apparent that Ghost Dogs needed to be hand-drawn. So, I bought “The Animator’s Survival Kit” by Richard Williams and got to work.” Cappa literally taught himself character animation on the fly as he began with the first frame of the movie, working part-time and figuring it out along the way. And problems soon followed. “I just didn’t know what I was doing,” he notes. “Every scene was a trial-and-error process until I got it right.  Most cartoonists make an animatic. I just didn’t have time for that!  You learn about these animation processes and think to yourself, ‘That seems pointless. I can do it my way.’ And, then you realize months later why everyone does it that way.  I didn’t know what I had until waaaaay late in the project. Thank god it came out okay, but it would have saved me so much anxiety and editing, and re-editing. if I had made those animatics.”

The film sports a rather ordinary looking dog alongside some rather bizarre looking ghost dogs. “They’re creepy and funny looking!” Cappa laughs. “I can’t imagine telling a scary ghost story about dog poltergeists if they didn’t have arms and legs! It’s funny to think of a world where dogs get human arms and legs when they die. I also think it makes for enigmatic characters. Why do they have arms and legs?  Do they behave like people?  Do they behave like dogs? Are they intelligent? How do they lick themselves?”

Let’s not go there. “I grew up with ghost stories,” Cappa admits. “When my dad was a kid, he lived in a house right next to a cemetery. He and his sister (my aunt) have some pretty creepy stories. My siblings and I would always beg my dad to tell them. My favorite story was when my dad walked into his sister’s room one night and saw a dark figure elevating her above the bed while she was asleep. Life is just more fun if you believe in that stuff.”

Let’s just hope none of us get reincarnated as a fire hydrant.