Mamoru Hosoda and the Magical World of ‘Mirai’

The veteran director of ‘Wolf Children’ and ‘The Boy and the Beast’ paints an intimate portrait of a young boy’s vivid imagination and how it helps him accept the arrival of his baby sister. 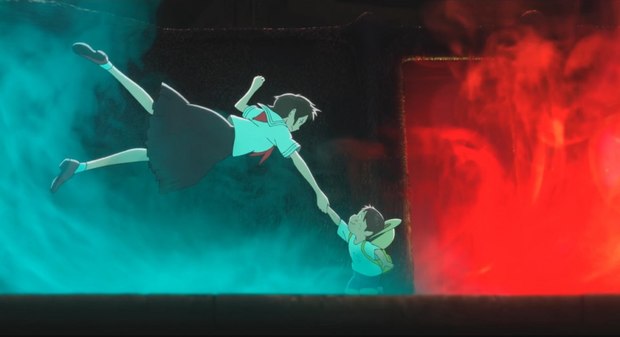 Sharing doesn’t come easily for many kids, and for formerly only child Kun, the sudden intrusion of a baby sister named Mirai throws his world into complete turmoil. Arguably director Mamoru Hosoda’s most patient and uncomplicated story, his latest animated feature, Mirai, is nonetheless an enchanted and emotionally sophisticated look at how a four-year-old boy, through the magic of his vivid imagination, learns to accept and embrace his family’s newest member.

A former animator at Japan’s Toei Animation, Hosoda has worked on numerous films and TV shows since his career began in 1989. After six years at Madhouse, he left in 2011 to start Studio Chizu in Tokyo with producer Yuichiro Saito.

Mirai, an official selection at this year’s Cannes Directors’ Fortnight, is set to play this coming Friday evening to open the second annual Animation is Film Festival. Mirai will be joined by a retrospective of Hosoda other critically acclaimed films that includes weekend screenings of The Girl Who Leapt Through Time, Summer Wars, Wolf Children and The Boy and The Beast.

Set within the beautiful confines of a house custom designed by Kun’s architect-turned house-husband father, Mirai feels different, much more personal, more intimate than other recent Hosoda films. That’s by design. According to Hosoda, Mirai continues his exploration as a filmmaker, which of late, has focused on ideas about of the role of family in people’s lives. “Context-wise, there are many similarities and differences [in my two most recent films],” he notes. “The biggest difference is that Wolf Children is a movie about a mother, The Boy and the Beast is about a father, and Mirai is about siblings. I wish to continue to challenge myself with new motifs and representations [about family].” For Hosoda, the story of Mirai began with the birth of his daughter and the difficult time his son had contending with his new sister. “Three years ago, when my son was three years old, his baby sister was born,” the director explains. “He threw a tantrum on the floor, claiming that she took his parents’ love away from him. When I saw that, I thought I saw the true nature and naked soul of what a human is. Humans cannot live without love. Life is about seeking love, wandering, and by accepting others, gaining love. That is what seeing my son made me think again. That is how I got the idea for this film.”

Hosoda deftly centers the film around the complex emotions of a young boy struggling with the upheaval caused by the sudden arrival of his baby sister. Seeing his world turned upside down triggers a series of wildly imaginative, magical but seemingly ordinary and engaging encounters with family members from his past and future, including his pet dachshund turning into a human prince, and a visit from his baby sister as a young adult ready to make friends and show she actually doesn’t carry on and cry forever.

A kid, a dog and a challenging family dynamic not-withstanding, the film has little in common with more standard family-friendly animated features studios have been producing for many years. Even in its obvious exaggeration, Mirai feels honest and “real.” Kun’s fantastic, almost magical encounters aren’t designed to be cute, laced with clever pop references or stuffed with superficial frenzied action. They serve to guide him, to help him examine and accept the troubling feelings he has towards his baby sister. “When you think of animated movies, in the past even Disney had children and animals as the primary characters,” Hosoda says. “It’s not like I was intending to go back to the roots of animation, but I thought that someone should be animating children and animals in the modern era. So, we as a staff started from scratch in observing children. We held them, felt the softness of their hair, smelled them…we sketched the way they played and how they went up and down the stairs. We worked really hard to make progress in the way we expressed children. Making a movie that has a four-year-old boy as the main character, I think that’s a new challenge in the history of film worldwide, including live-action.” For Hosoda, the production began with words and ideas rather than images. “This movie is based on an original script,” he describes. “I came up with the plot, wrote the script, and then storyboarded, in that order, to plan out this film. Character design and art settings came into play after the script was just about done. After storyboarding, we moved on to animating, doing backgrounds, and CG.”

All told, Mirai took almost three years to make, employing a mix of 3D and traditional tools. According to the director, “Broadly speaking, I put in a year to plan, a year for pre-production and a year for post-production that doesn’t include animating. So, the film took about three years. There were over 300 staff, but animating was done by about 20 people. This film uses CG as well, but mostly we made it with paper and pencil, paint and brush.”

“We spent about eight months with the visual development through discussion,” Hosoda adds. “For the characters, I worked with Mr. Hiroyuki Aoyama, the animation director, and Ms. Ayako Hata. For the outfits, I worked with stylist Mr. Daisuke Iga.”

The veteran animation director has so far resisted the call of live-action filmmaking that draws many away from the medium. For him, animation remains a storytelling medium with ample room for exploration. “Animation is art,” he reflects. “When I was young, there was a time when I wanted to become an oil painter. I was influenced heavily by the art of Europe in depicting the beauty of anatomy. I don’t think animated films are an extension of live-action films, or that they are an afterthought. I believe animated films can be considered to be a part of art history. Why? Because animated films is an art. And the worlds and true natures of being a human that haven’t been animated yet present tremendous possibilities. I want to explore and challenge those possibilities.”