Makoto Shinkai Shines at Screening & Appearance for ‘Your Name’

The director of Japan’s biggest box office hit of the year greets fans at the Los Angeles Laemmle Music Hall on Saturday night, speaking about his creative process and the inspirations behind his characters and their stories. 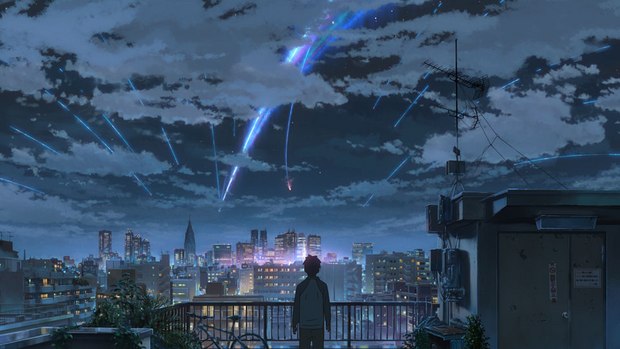 A story of two young souls journeying to find each other through time and fate, Your Name marks the first commercial success for the largely self-taught Japanese filmmaker, who began his career a graphic artist and illustrator. It follows high schoolers Mitsuha and Taki, two strangers living completely separate lives who suddenly switch places: Mitsuha wakes up in Taki’s body, and he in hers. This bizarre phenomenon continues to occur at random, but the two somehow manage to adjust their lives around each other. They build a connection, communicating by leaving notes, messages, and, more importantly, an imprint. But when a blazing comet threatens an entire town, Mitsuha and Taki must find a way to reach each other, and save the town.

Following its world premiere at the Los Angeles Anime Expo in July, Your Name has topped the box office for 13 of its 15 weeks in theaters since its release on August 26, taking in more than $197.5 million domestically to become the number-one box office hit of the year in Japan, and earing the peculiar distinction of being the first animated film not directed by Hayao Miyazaki to gross more than $88 million. Shinkai’s 2002 short film, Voices of a Distant Star, was a true labor of love created almost single-handedly with a Power Mac G4 running NewTek LightWave and Adobe Photoshop and After Effects. The film, which employed the director’s signature hyper-realistic backgrounds, was enthusiastically embraced by the anime world, and Shinkai went on to release, in 2004, the critically acclaimed feature The Place Promised in Our Early Days. The director’s next project, 5 Centimeters Per Second, released in 2007, comprised three short films: Cherry Blossom, Cosmonaut, and the titular 5 Centimeters Per Second, followed by the feature-length Children Who Chase Lost Voices from Deep Below, in 2011, and The Garden of Words, in 2013. Surpassing Studio Ghibli’s Princess Mononoke and Howl’s Moving Castle, Your Name is now the second-highest-grossing domestic film of all time in Japan behind Miyazaki’s Spirited Away ($300 million). It is also the fourth-highest box-office earner of all time -- imported or domestic -- behind Spirited Away, Titanic and Frozen. And in China, where the film opened in first place this past weekend, playing in more than 7,000 theaters, Your Name earned a whopping $41 million.

Produced by CoMix Wave, Your Name recently garnered a nomination in the newly-created Independent Animated Feature category for the 44th Annual Annie Awards, and is currently on the Oscar consideration list in the Best Animated Feature category that will be voted on for the 89th annual Academy Awards. The film kicked off its Oscar-qualifying theatrical run at the Laemmle Music Hall here in Los Angeles on Friday, with audiences lining up on Wilshire Boulevard for a chance to see the movie ahead of its nationwide release from FUNimation Films in January.

At a special screening Saturday night followed by a Q&A with the director, the theater was packed with fans, many of whom had previously seen the film but were hoping for a glimpse of Shinkai. Friendly and unassuming, the 43-year-old director fielded questions from Variety’s Peter Debruge before the floor was opened up to the audience. Speaking with the help of a translator, Shinkai commented on topics ranging from his creative process to the inspirations behind his characters and their narratives.

Despite some questions getting lost in translation (Oh, computer animation is better than hand-drawn in terms of efficiency, not quality. Oops.) what became immediately apparent was that he is deeply invested in the craft -- and magic -- of bringing his stories to life.

Here are some of the highlights of the discussion, and you can watch the full Q&A in the video player below: