Composer P.T. Walkley talks about the musical side of DreamWorks Animation’s live-action/animated hybrid preschool series, whose new season is now streaming on Netflix. 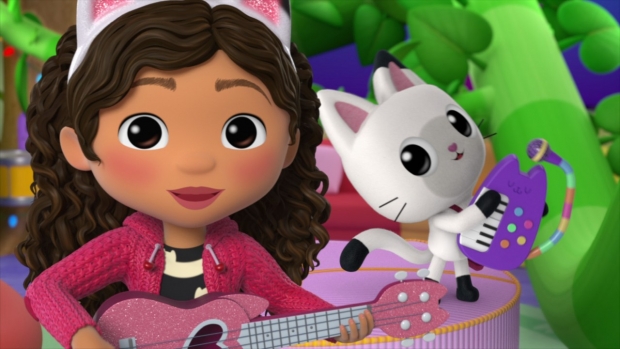 Since its debut in January 2021, Gabby’s Dollhouse, which is now in its sixth season on Netflix, has been bringing joy to preschoolers of all shapes and sizes. Since the show features a cornucopia of cats that are also of all shapes and sizes – as well as craft-making projects and a fantastical live-action/animated world full of adventures and surprises – it’s not hard to understand its appeal.

In addition to its colorful characters, cleverly designed locations, and crazy quilt of animation styles, the series is undoubtedly also elevated by the engaging music and songs contributed by composer P.T. Walkley. Known for his work on the immensely popular Blue’s Clues, which, like Gabby’s Dollhouse, was created by Traci Paige Johnson and Jennifer Twomey, Walkley said that he employs a two-part process in his current endeavor.

“First, I get the script to kick off things,” he explains. “We all meet to discuss the overall music within that episode. I write the songs first, as they are needed for animating to. There are typically a couple rounds of revisions to my demos before we are all happy with them. The next step is to have the actors/characters sing the songs, replacing my temp vocals.”

The next step, he says, is the underscoring, which happens much further down the timeline. “It’s usually at least nine months or so between writing a song for an episode and then seeing that episode cut together and ready to score,” he  elaborates. “It’s nice having the songs written in advance, because I can often extrapolate little melodies from the songs to act as score through that episode.” Walkley normally starts his composition process on the guitar, the instrument on which he’s most fluent. Then, when it’s time to lay down a track, he moves to a midi piano. (“Omnisphere has some fantastic-sounding acoustic piano patches, along with tens of thousands of others,” he notes.) After that, he plays drums and the bass and – “when I’m doing it responsibly” – he sings the temp vocals before adding additional layers. The finished product, he says, winds up being a hybrid of modern pop sounds and a more “hand-drawn aesthetic” – including ukes, mouth sounds, finger snaps, and kazoos. “It’s called ‘quirky cat bop,’” he sums up.

Asked whether there were any significant musical innovations or changes in the current season, Walkley says that, back in the very beginning, he wrote a theme song for Gabby and each of the Gabby cats, which provided a blueprint that continues to pay off.

“There’s less and less guesswork when it comes time to find a tone for a certain character song or score cue,” he explains. “There are no drastic changes in tone this season, but as we’ve gone along we’ve definitely touched on more and more genres. As long as we run it through the ‘quirky cat bop’ filter, it always seems to feel like the show, no matter the genre.” As for when in production the music is locked and how much leeway he has to make late changes, Walkley says that, while much of the music at this point is “ritualized,” there are a couple of original songs per episode, so sometimes it can go to the wire.

“There can be changes in the music all the way up to the mixing stage, which can get tricky,” he shares. “But that’s just how most projects are in general. I know when I make a record, I’m never done mixing and tweaking until it’s time to release it, so it’s kind of like that.”

Finally, in describing what the experience of creating music for Gabby’s Dollhouse is like, Walkley is quick to point out that, while he’s unquestionably the main guy, it’s far from a one-man show.

“The whole music department, led by [TV Music at DreamWorks Animation SVP] Alex Nickson, has been amazing to work with,” Walkley enthuses. “From the beginning, they assured me that they would set me up for success on this project, and that could not be more true! There is so much music and there are so many moving parts on this project that I definitely couldn’t get it all done without them. Even if I think I’ve hit a song or piece of music out of the park, their feedback always seem to make the piece better. I’m surrounded by incredibly talented people who help each other out. It’s truly a dream team.”