‘Madagascar: A Little Wild’: A Fun and Emotional Mix of Old and New

For supervising director T.J. Sullivan, building on the success of DreamWorks Animation’s hit franchise meant ensuring that as kids, the fab four – Alex, Marty, Gloria, and Melman – get the right chance to form bonds that last a lifetime. 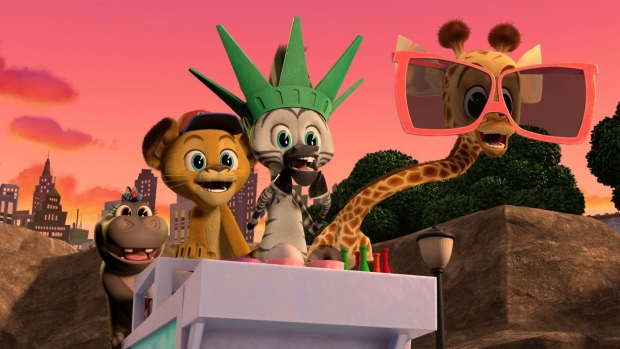 From the beginning of his stint on Madagascar: A Little Wild, supervising director T.J. Sullivan knew he and his team were “standing on the shoulders of giants,” quoting supervising producer Saul Blinkoff.

“Everyone on this incredible team is a big fan of the original Madagascar movies, and the animation style in those films is so wonderfully unique,” says Sullivan, known for his directing work on Dragons: Race to the Edge and Back at the Barnyard. “We wanted to honor that and build upon it.”

Season 1 of the 3D/CG DreamWorks Animation Television series, released on Hulu and Peacock in September 2020, follows elementary-aged Alex, Marty, Gloria, and Melman, or the “Fab 4” as Sullivan likes to call them, exploring outside the boundaries of their zoo habitats in the Big Apple for the first time. Madagascar: A Little Wild is the third animated TV series in the Madagascar franchise that also includes four feature films. This latest installment - Season 3 premieres Thursday, May 27 – serves as a prequel of sorts to the Kid’s Choice Award-winning and Annie-nominated 2005 animated comedy adventure that started it all.

“What was important was carrying over the heart of those movies,” says Sullivan, whose efforts focus on overseeing the story team, including the directors and story artists, as well as locking final animatics for episodes. “That bond our core four share as a family. We wanted to make sure that came through with our characters, who are only 6-7 years old and are just forming those bonds that will last a lifetime. Heart and family are at the heart of this show.” “When I was approached by the production as it was being developed, they showed me this amazing ‘Sizzle Reel,’ which had the kids performing a big Broadway number, with really whimsical set pieces,” remembers Sullivan. “I have some musical theater in my background and having just come off a show that had a musical episode, I was eager to do more. I knew I had to be a part of this special show.”

He continues, “We tackle quite a few musical numbers each episode, which vary in tone and style. We have these more fantastical numbers, along with bigger Broadway numbers where we collaborated with choreographer Heath Butler (Where's Waldo?), and her team, to provide reference for both our story and animation teams to follow.”

Sullivan has been working in CG animation since 2006, serving as animation supervisor for Beware the Batman TV series and Barnyard, as well as a modeling and texture artist for the 2011 film Foodfight! Sullivan says he enjoys the “cinematic approach” that comes with creating a CG world and still finds himself inspired by the animation. “It’s not only the animation style, with its wonderful physical humor, but also the approach to design and cinematography, such as using wide angle lenses to help sell some of that comedy,” explains Sullivan, who uses that inspiration as a driving force for approaching the world of these wide-eyed animal youngsters. “We’re always looking for dynamic angles and try to visually separate our ‘habitat’ from the outside world by staging our cameras differently in each. In our HAB, which is meant to be a comfortable, cozy space that feels like ‘home,’ we try to keep our camera angles lower, on the kids’ level, compared to sequences when they’re in the city, which generally have more dramatic angles.” Those dramatic angles also visually reflect the unspoken emotions of the main characters. “We’re seeing these characters as kids for the first time, still full of wonder and awe at the world, not yet having developed bad adult habits or anxieties,” Sullivan says. “We get a chance to explore sides of these characters we may not have seen before, and some of those new traits come from what we observe in the children in our own lives. We spend a lot of time discussing our own children and ways they might react to similar situations our gang is put into.”

Using Storyboard Pro, Photoshop, and Flix, as well as Maya and FBX viewer for help setting up backgrounds and cameras, the show deals with many big visual ideas for the small-statured cast, with FX-heavy episodes featuring parades, baseball games, and even snowstorms.

But, in addition to their impressive use of gags, cinematic sequences, and quick wit, Starfield and executive producer Johanna Stein made sure that Gloria, Alex, Marty, Melman, and their robustly-animated friends were also well-rounded emotionally, each with their own hopes, dreams, and feelings that are new to even long-time Madagascar fans.

“We try to carry through that snappy style of animation but utilize it sparingly, because we want the gang to feel soft, lovable, and relatable, as well as the quick and comedic we’re familiar with,” says Sullivan. “We also work hard to push the asymmetry in their expressions and poses.” Just as physical comedy has been hugely important throughout the Madagascar franchise, this series boosts physical expression not only for moments of humor, but also to highlight differences in often underrepresented communities.

“One of our main characters, Dave, is deaf, and he and his sister communicate using American Sign Language (ASL),” Sullivan shares. “It’s been wonderful working with our ASL consultants to bring authenticity to how Dave and Pickles communicate with the world.  We film live-action references for both our story team and animation team to follow, not only for the ASL signs, but for the characters’ facial expressions as well. The wide array of facial reactions and emotions you can create in CG really helps to sell how our deaf characters communicate with each other and push more dramatic moments.”

But despite the abundance of animation assists and references, from dance choreographers and ASL teachers to the team’s own children and New York City itself, Sullivan said the production often struggled not to fall too deep into the more mature-humored, slapstick mindset of the original films.

“We are constantly reminding ourselves that they’re children, to keep ourselves honest about how they would behave,” he describes. “While a pose or gag may technically work and be funny, does it work for a 6-year-old? Would a 6-year-old use those words? So, we take what’s there, what we’ve observed, and then try to find a way to infuse a moment with authentic, child-like traits.” And all this effort brings what Sullivan believes is the biggest reward of the show. “The reward really comes more from seeing a child come away with something from our show, or laugh at a gag that we sweated over,” he says. “The difference between a ‘meh’ and a big laugh could be just frames, and it’s wild seeing a kid get it. I take pride in our team, and the work they put in to get this show out there.”

Sullivan keeps his fingers crossed that more Madagascar stories with the furry, fantastic four and friends are on the horizon. “There are certainly more stories you could tell with this adorable and zany cast of characters, including our secondary crew,” he concludes. “I’ll be waiting for an Ant’ney Variety Show spinoff myself!”