Lynne Naylor and Sunil Hall Talk ‘The Mighty Ones’ Season 2

A new, high-energy season of DreamWorks Animation’s kids’ comedy about the hilarious misadventures of a twig, a pebble, a leaf, and a strawberry, living in the unkempt backyard of a trio of equally unkempt humans, premieres today on Hulu and Peacock. 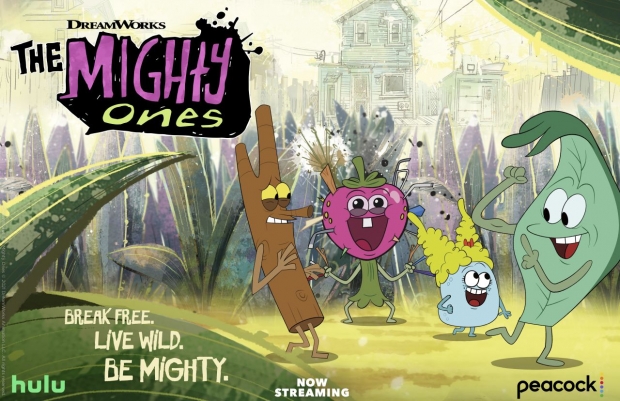 From falling in love with crows to harvesting honey from a hive inside the head of a garden gnome, Very Berry, Rocksy, Leaf, and Twig are up to their you-know-whats in mischief as they return for another season of backyard shenanigans in DreamWorks Animation’s The Mighty Ones. Season 2 of the hit comedy premieres today on Hulu and Peacock.

Set in a world where talking plants and fruits worship extremely unsanitary humans as their gods, The Mighty Ones is a 2D animated TV adventure that brings to life all the treacherous, wild, sticky, muddy, and extremely fun adventures that happen in the often unseen and unacknowledged parts of our backyards.

From the start, Naylor, Hall, and their creative team spent considerable time at ground level, immersing themselves in the grassy world of their own backyards, and the DreamWorks campus, stretching their creativity to come up with wacky adventures for Berry and her rag-tag crew of misfit shrubbery, landscape, and occasional insects.

According to the creators, the ideas never stopped flowing, thanks to real life landscapes of endless possibilities. In a recent conversation, they shared what they have planned for the show’s backyard heroes, along with some of their favorite funny moments, in the new season. Victoria Davis: It’s so great to talk to you both again! How excited are you both that the show was renewed for a second season? What was the overall viewer response from the first season?

Lynne Naylor & Sunil Hall: We were very excited to continue creating new episodes for The Mighty Ones and sharing them with the world! The response was good for the first season. We were very pleased with our creative directors, board artists and the direction the show was taking, so continuing meant we could really evolve to an awesome place. We are looking forward to reaching more viewers and growing our audience with Season 2.

VD: Once you got the greenlight for another season, what ideas immediately started flowing? What are you hoping to do in Season 2 that you weren’t able to do last season?

SH: The first 10 episodes established the world and the characters, setting the groundwork for the second 10. For me, the second half is where the show really finds its voice. It gets weirder and we dive into each character's personality a bit more. VD: When we first spoke prior to the show’s launch, you mentioned how many ideas you both got for episodes just by spending time in your own backyards. And I can imagine that fueled an infinite number of ideas. Where did you draw inspiration for the new season? As you watched episodes from the first season, did you ever think, “Oh, this gives me a great idea for Season 2”?

SH: We were constantly coming up with character and story ideas while working on the first season. Our story editor Dani Michaeli would file them away to bring back later. We also promoted two of our first season board artists - Erica Jones and Nathan Bulmer - to directors and they both bring really strong creative voices to these episodes.

LN: The show was taking on a life of its own with a level of humor that Sunil and I loved. We also had awesome story and direction with Dani and our supervising director Greg Miller.

VD: Tell me about the animation and visuals for the new season. Obviously, some character designs are the same, but are there any new animation treats in store with Season 2? I really enjoyed the gorgeous visuals that went into Berry’s explanation of bees and how honey is made.

SH: Our design team, led by amazing art director Jenny Gase-Baker, never fails to impress me. We threw some challenging environments at them this season and they really delivered. “The Beehive” episode is really great. The Mighty Ones also explore a creepy forest of fur on the back of a huge dog, get lost at sea, and even spelunk inside a snake. Our partner studio Snipple Animation produced some really nice animation on this episode batch. Despite all the challenges that come with a global pandemic, they continued to impress us all season. VD: I loved the incredibly creative concept of a hive built on top of the head of a gnome. Are these things you’ve seen in real life?

SH: Bees make hives in some weird places. We always try to find the weirdness and humor that nature provides and build on that. I think the board team came up with putting the hive on a gnome, which is so much more interesting than just having a hive hanging from a tree branch.

LN: We always search for the humor that suits the concept of the show and plus it story-wise any way that we can. That includes any visuals that reflect the story or what our characters may encounter.

VD: Speaking of the “birds and the bees” scene, the humor is so great this new season! I love the quick cut-aways and visuals that go from beautiful to incredibly intense and a little horrifying. It’s a comedy bit that really can only be done in animation -- did you guys try to really amp that up in Season 2? Any sequences you’re particularly proud of or that made you laugh more so than others?

LN: We definitely amped that up. I am personally really pleased with the outcome of the episodes and have so many sequences that I love. In "Unintended Bunnyness," I loved the little eggs following Twig around as well as when the Momma shows up and Twig is confronted by a crazy bird and an angry rat. I also loved Berry's romance with a crow, as well as Berry dealing with freezing up in "Ice Ice Berry,” to name a few.

SH: I love surprising visual humor like that. Our board-driven process gives our storyboard artists and directors the power to go to some really weird places. There is a gag in "Sneezyitis" where a beach ball deflates around Rocksy that kills me every time. VD: Were there any new challenges that came with this season’s production?

LN & SH: We were about halfway through post-production when the lockdown happened. It was a big adjustment, but our teams both here and in the Philippines worked really hard to switch to work from home without breaking stride. The records had to be done remotely with our actors.

VD: With so much more happening in Season 2, what are you most excited for fans and new viewers to see?

LN: I am proud that we have had so many fresh situational stories and I am fond of all of them for different reasons. I lean towards the episodes where our main characters really shine, so I would say "Ice Ice Berry,” "Berry's Pet Threat" and "Two Twigs."

SH: It's hard to pick, there is so much I love about this season. "Berry's Pet Threat" and "The Transformation" are a couple of my favorites. I'm excited to see what episodes resonate with our viewers.