For writer Kiel Murray, the Apple Original Films and Skydance Animation fantasy adventure is rooted in the very real struggles of kids growing up without forever families and the idea that bad luck is random, not something they somehow ‘deserve.’ 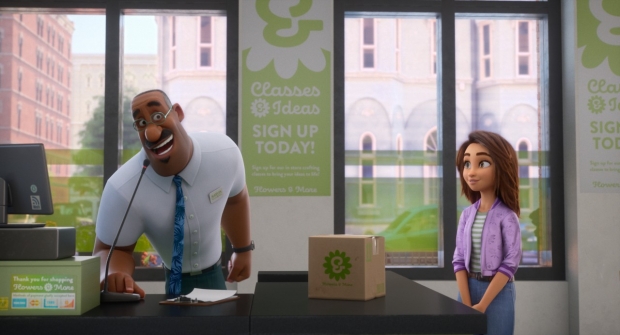 Along with being a literally out-of-this-world, fantasy adventure filled with physical comedy and carefully coordinated animation, Skydance Animation’s first feature film Luck, an Apple Original Films production that premieres tomorrow, August 5, on Apple TV+, is rooted in the very real, very trying inner struggles of kids growing up and aging out of foster care.

“An 18-year-old character aging out, it’s not necessarily something you see in animation,” says Luck writer Kiel Murray, known for her work on animated features like Cars and Raya and the Last Dragon. “Speaking to the truth of having bad luck, we wanted something that was actual bad luck that people deal with in real life, even though the movie’s obviously fun and fantasy. We wanted to balance the magic elements with real-life bad luck.”

The film centers around Sam Greenfield (Eva Noblezada), the unluckiest person in the world. Now 18 years old and aging out of the foster care system, Sam is about to set out on her own for the first time, with a new apartment and a new job. But, she’s reluctant to leave the comfort of Summerland Home for Girls, especially when she learns that her five-year-old bunkmate Hazel (Adelynn Spoon) is about to receive her first visit from a potential forever family.

But while adjusting to life on her own – and wrestling with anxiety at the thought that Hazel may have to endure the same painful disappointment she experienced repeatedly for years –Sam stumbles upon a real lucky penny, which leads her to a talking cat named Bob (Simon Pegg), who accidentally leads her to the never-before-seen Land of Luck. Determined to bring some good luck home for Hazel, Sam teams up with the magical creatures employed in Land of Luck, including Bob, to give her friend the best chance at the happiness Sam herself has been craving her entire life. “We did a much deeper dive into the research of foster care, to try to be really authentic and not play it like some medieval orphanage scenario,” says Murray. “We wanted to make it modern and real, so we talked to a lot of social workers, and we met with a lot of foster youth to delve into the reality of being in foster care and what really happens when you age out of the system.”

What Murray and the team discovered was that there are a lot of ominous feelings around the idea of being “unlucky” in foster care, especially for those who age out and don’t find their forever family. For them, the reality of being “unlucky” carries a larger weight than popping a tire, losing a wallet, or stubbing one’s toe on the banister.

“There's a scene in the movie where that comes out, where Bob pokes on it, and [Sam] reveals her deepest fear, which is that there's something wrong with her and that's why everything goes wrong for her, that it’s not just bad luck,” says Murray. “When we talked to some of the youth, I would ask the awkward question of, ‘Did you ever feel like you deserved it, in some way?’ It's a horrible idea and, of course, no one does. But [I asked them], ‘Did you start to feel, when bad things kept happening in your life, that you deserved it?’ And some of them said, ‘Yes.’”

Murray continues, “There was a sense that, at a certain point, you start to feel bad about yourself because, ‘If bad things keep happening to me, it must be my fault somehow.’”

But Murray wants to use Luck to push back against such feelings.

“I think it clicked when we came up with our rules for luck, the idea that luck is random, which feels true to life,” she explains. “We didn't want to put forward some concept of someone pulling strings and deciding who's going to have good or bad luck. Because there's so much terrible, actual bad luck happening in the world, especially right now. So once we hit upon the idea of what we call “the randomizer,” a machine contraption that takes the luck that's created and mixes it up and sends it to our world, it felt safe to play with that being magical, and also on the human side that no one is deserving of good or bad luck.” And more than just convincing viewers that they don’t deserve bad luck, Murray also hopes to show that experiences with bad luck can actually be advantageous.

“I saw the potential for how bad luck and experiencing a lot of bad luck can become almost like a superpower when you face it in your life and when you've endured a lot of things,” says Murray. “I think Sam is a really inspirational character that way. I have three teenagers, so I hope that they look at and want to be like Sam who just keeps on going and stays positive and hopes for the best.”

She adds, “Sam’s also a really selfless character. Her whole drive is to help her friend not experience what she experienced, which is such a sweet story. And I hope what comes through is this idea that love is the luckiest thing and, if you have that, can deal with any other bad luck that comes your way.”

Though none of the foster kids that Murray talked with were able to see early bits of the film during production, many are planning to be at the premiere.

“I'm so excited,” says Murray. “I hope it gives everybody hopeful feelings. But, for kids in the system, I hope that it feels authentic to them. There's a person in the studio who had adopted his daughter out of foster care, and he was also really helpful to us in terms of terminology and authenticity. And he's really excited for his daughter to see it. I just hope it feels real to them.”