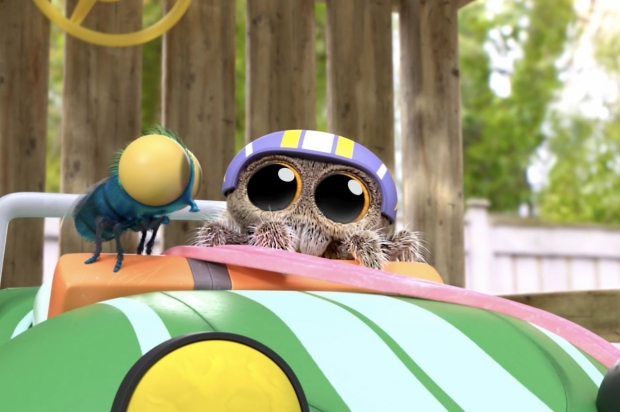 Just over four years ago, a tiny, furry, adorable, big-eyed jumping spider stole the hearts of YouTube viewers with his twig harp, unquenchable curiosity, and disarming innocence. When Joshua Slice first created Lucas the Spider in 2017 with no agenda other than to breathe life into what he thought was a fun idea, the Turning Red, Big Hero Six and Zootopia animator had no idea this lovable arachnid would eventually get his own TV show.

“It started as just a personal project for my own fulfillment, but once I got it on the internet, those first couple days of it getting attention were pretty shocking,” remembers Slice, whose small series gained 10,000 subscribers in a week and now has amassed a total of 3.6 million. “That’s when I figured I should probably make more of these. Every day since then, it's just kind of kept going up and up and up and I’ve just been walking along with it every step of the way.”

Lucas the Spider, now a series airing on Cartoon Network’s preschool block Cartoonito, is directed by Rusty Rivets’ Paul Brown and produced by Fresh TV, with Slice continuing in an advisory role on production.

The show keeps its highly realistic 3D animation as well as its starring character, the curious and kind-hearted-as-ever jumping spider. Each episode features Lucas having adventures around a large house and backyard with new characters – a dog, chameleon, fly, bumble bee, owl, and more – as they discover the wonders of everyday things such as robot toys, fireplaces and gardens, as well as learn about what it means to be a loving friend.

The new series – 78 7-minute episodes - aims to embrace and illustrate core values of kindness, inclusivity, and perseverance, grounded in social and emotional learning skills, all things that attracted executive producer Tom McGillis to Slice’s YouTube shorts in the first place.

“Lucas was really popping around the world on the internet, so the four of us partners at Fresh TV had a phone meeting with Joshua and poured our hearts out to him and told him just how magical we felt that connection was that he had with his nephew Lucas, who voiced this little spider, and how magically that transferred to the screen through this incredible animation that he had created,” explains McGillis, president and partner at Fresh TV. “It was the first time the four of us had ever really been so excited about something in unison. Lucas the Spider has a way of just getting you right where you live. We're very different people. But it hit us all right bull’s-eye in the heart.” He continues, “We promised Joshua that we would pour our hearts and souls into bringing that to television if he gave us a shot. And he did.”

Slice adds, “A spider is a character that is pretty universally disliked. But Lucas is cute, and challenges people to accept him. It's been such a joy to watch, seeing this character grow.”

“My favorite was the sink episode because I liked the part where he falls down the drain,” says the human Lucas, who began voicing his spider counterpart at the age of five. “It’s funny and I wanted it to be longer.”

“I once thought about that years ago, whenever I’d see a small bug or something in the sink, that this is a different world for them,” Slice notes. “It's cool how you can turn anything into something unexpected just because of the scale difference.”

In addition to using CG and photoreal 3D animation on top of live-action filming to elicit a more emotional response and immediate connection between viewers and his little jumping spider, Slice employed the concept of scale as a useful tool in his original series, as does the current team behind Lucas the Spider.

“This isn't the first show about a very tiny character, but it is a show where Lucas's sense of wonder and discovery informs the smallest, tiniest, almost inconsequential things in his house,” notes McGillis. “We shot in a real house in Toronto and Lucas discovers something as simple as a paperclip and can make that exciting and wondrous. With the timing around the pandemic and families’ worlds feeling a little bit smaller around them, having an even smaller character experiencing such extraordinary wonder in an ordinary home, I think it's resonating.”

Plus, playing off the sincere and often funny emotions of Lucas and his fellow tiny, animated creature friends also adds to the charm of the show.

“From the get-go, Lucas is a character that's asking for your empathy, kind of like in an underdog role,” says Slice. “And that has continued with the other characters. Each one has their own personality and way in which they're connecting with Lucas. So, it's different opportunities to have different types of interactions and tell different lessons in fun ways.”

“I think one of our favorite things, which came right out of Joshua's head, is that Lucas’ best friend in the world is a fly,” adds McGillis. “And we do attack that head on in early episodes when this fly friend accidentally sees a Planet Earth-type documentary describing just how spiders trap and eat flies. So, he has to do a little check in with Lucas to make sure they're still cool. We do lean quite heavily into humor in this show. I think that empathy and laughs are what people are really craving right now, whether they are young kids or their parents.”

That’s certainly the case with Slice’s own family.

“I'm an attorney and a lot of what I do is really emotionally heavy,” says Slice’s sister Yacoub. “And so having something that brings a smile, that's about a resilient little spider, is just so much fun and it's a nice break. It’s a source of joy in a time where there isn’t a lot of that now.”

Heart, according to both Slice and McGillis, is and always has been at the center of Lucas the Spider. And McGillis says the team’s goal from the beginning has been to “help that beating heart of Lucas that was already there beat just a little louder.”

“Even though it's a show about discovering small things, and that wonder of discovery and play, every one of those 78 stories is about something like a moment in a friendship where maybe you hurt someone's feelings, or maybe you're having trouble taking turns or sharing,” says the producer.

Slice adds, “It’s been really fun for me to watch it grow. I'm having friends reach out saying they turn the corner and see their kid watching Lucas the Spider in the living room. It's just a really cool feeling to be able to make something, put it out there, and know that generations of kids will be influenced in a positive way. And, hopefully, carry those nostalgic memories as they grow up. Thomas the Tank Engine, Teenage Mutant Ninja Turtles, those are the shows that stuck with me and it's kind of cool to think that I'm giving that back to this new generation.”

There is talk about a Lucas the Spider feature film in development from Fresh TV, but McGillis says nothing has been confirmed. “There is quite a bit of interest, and we are excited to keep exploring it, but we can't divulge more details than that.”