Character supervisors Laura Beth Albright and Sajan Skaria discuss how they fully embraced, rather than hid or obscured, the potentially scary metamorphosis of their lead characters moving in and out of the water, in Pixar’s new animated feature now streaming on Disney+. 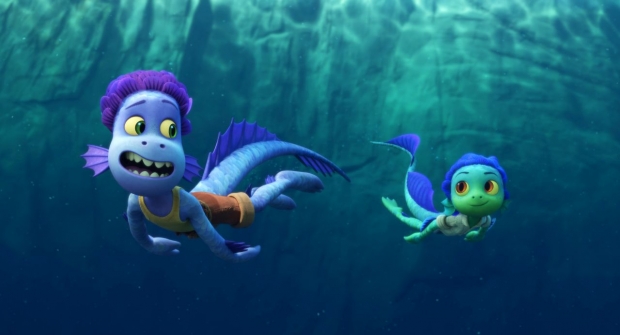 Character transformations have come a long way since the days of The Little Mermaid, Shrek, and even Brave. While previous animated films often hid a character’s spectacular metamorphosis behind bursts of sparkles and light, Enrico Casarosa’s Luca, now available on Disney+, may mark the start of a new era, where every step of a character’s transformation – in this case fins to legs, human to well… not-so-human - is laid out on screen for viewers to experience and hopefully enjoy.

“One of the things Enrico told us initially was to embrace this transformation,” says Luca character supervisor Sajan Skaria. “It's the core of the movie. We don't want to hide it behind bubbles or smoke, or [just allude to it] off-camera. We really want to see it in slow motion in a lot of shots. So, we knew we had to build a system that could adapt to anything that was thrown at us. And it is groundbreaking. It's a very new thing [at Pixar] that blew a lot of people's minds.”

Taking place on the Italian Riviera, Pixar Animation Studios and Walt Disney Pictures’ latest 3DCG visual marvel tells the story of the adventures of a young sea monster named Luca, anxious to explore and learn about the world above the surface. After stumbling upon sunken gadgets and gizmos a-plenty, Luca runs into another young sea monster named Alberto, who hastily encourages him to visit the surface by literally pulling him onto shore. But, instead of suffocating like a fish out of water, Luca, to his surprise, transforms into a human.

As the two become close friends, Luca’s parents discover their son’s frequent and forbidden visits to dry land and threaten to send him to the deepest depths of the ocean. A frightened Luca runs to Alberto for help and the two decide to run away to the nearby town of Portorosso. While the film does harbor deeply emotional themes and darker moments of betrayal, Luca primarily focuses on adventure, friendship, and spotlighting the beauty and strength of Italian people and their culture. And it was these story focuses that greatly informed both the overall visual style of the film and the character designs.

“Enrico’s style is very cartoony, illustrative, and childlike,” says Skaria, whose responsibilities on the film were to manage the characters team, comprised of modelers, riggers, shaders, tailors, and groomers. “That was something we could always go back to in terms of a soft, more charming, and appealing look. So, early on as we designed the human Luca, and especially the sea monster Luca, we wanted to make sure it was not a creepy or disturbing look.”

Paralleling the round and soft animation of the film’s human characters, the sea-monster versions of Luca and Alberto are also friendly-faced. Despite their yellowed eyes and larger teeth, the sea monsters’ colorful scales, bulbous faces, and flowing, almost-fluffy head-fins make them extremely fun to look at. And Luca’s earlier transformations were meant to capture that same essence of entertaining awe.

“From the beginning, one of Enrico's influences was Miyazaki, and there are lots of moments in Miyazaki movies where something magical or unexpected happens,” says fellow character supervisor Laura Beth Albright. “There are lots of moments in those movies where you really feel a sense of wonder, especially from a child's perspective. And those were things that Enrico really wanted to feel with this character. When Luca transforms for the first time, we wanted to feel his wonder and amazement at, ‘What is happening?’ and ‘Where am I?’ and ‘This is amazing.’”

Luca’s first transformation happens quickly; it’s full of understandable panic. But his second transformation, where he visits the surface for the first time on his own, is captured up close and in slow motion. It’s a gorgeous sequence where scales shrink and disappear, gills turn into ears, and head-fins turn into hair.

“You only see transformation in about 30-40 shots in the whole movie,” says Skaria. “For most of the movie we're seeing Luca as either a human or a sea monster. But we wanted the transformation to be a bridge between the two.” But creating a seamless transformation was much easier said than done.

“There are things that just don't match up,” explains Albright. “Where does the tail go? What happens when the fingers shrink? What happens when fins stick out of the body? Those are all things that could look scary or creepy or weird or monstrous. And we couldn't say, although we joked about it in the beginning, ‘Just don't ever show his backside during transformation so we don’t have to solve the tail problem.’ We had to find a way to make this work, no matter how many shots we ended up with.”

She adds, “We knew that the motion and actual animation was going to be a huge part of selling the look, and that's why we did an early test. If you're just looking at a model, turning from one end to the other, you're going to be like, ‘Wow, look at that ear. What's going on there?’ But when you're caught up in the emotion of the scene and you're emotionally there with the character, you're not as distracted by these little details.” After researching transformation and camouflage behavior of creatures like chameleons and octopuses, Albright and Skaria sought the artistic help of Luca’s animation supervisor Michael Venturini to beautify the sea monster / human and human / sea monster transitions. As they had hoped, the animation “hid the weird stuff” and made those evolutions a complete success.

“Those animators are so good,” Skaria shares. “They always do magic tricks and cheats, so we knew we could use those tricks to hide things. But there are transformation shots that are frozen on screen, where people could actually look into the magic trick and see how hard those shots were for us.”

He continues, “But we had the hands of the artists to save us. People went into the shot and started painting in detail and making sure the transformation was not cutting through where it shouldn’t and that each scale was in place.”

Once the transformation system was fully developed, Skaria says the tool was a big hit with Casarosa and other members of the creative team, including Venturini, who used it to develop innovative multi-limb movements in certain shots, like when Alberto is speeding down the hill on foot, trying to catch his balance after his and Luca’s hand-made Vespa broke apart.

“What's weird about that is you have Alberto with four legs, and they all attach kind of at his hips, and that almost looks creepy, like a four-legged Alberto,” explains Venturini. “You want the secondary limbs to fade out. So, we would use some simple draw over tools to paint out where we didn't want to see them.”

Multi-limb movements are not a new cinematic feature; they can be seen in The Peanuts Movie (2015) and further back in 1978’s TV series, Future Boy Conan -- another inspiration for Casarosa’s film. But what the Luca team needed was a way to create these movements efficiently, and at a high quality.

“Well, the folks that developed the transformation technology said, ‘Hey, we could probably help here,’” remembers Venturini. “And instead of transforming from human to sea monster, we used the tool to transform Alberto from human to invisible. That allowed us to load on a second Alberto and transform him invisible, all the way down to his feet and leave just the feet there. And with that new technology, we could pick where we wanted the invisibility to start and how much we wanted to fade it out. We could get really versatile from frame to frame.” Skaria believes this is only the beginning for their new transformation tool.

“The fact that animators could live in our software and make a character transform between two states is not something we’ve done recently at Pixar,” she says. “Normally, this stuff is done as an after effect. But I'm pretty sure future shows are going to start using more and more of this, coming up with new ideas on how to use this technology.”